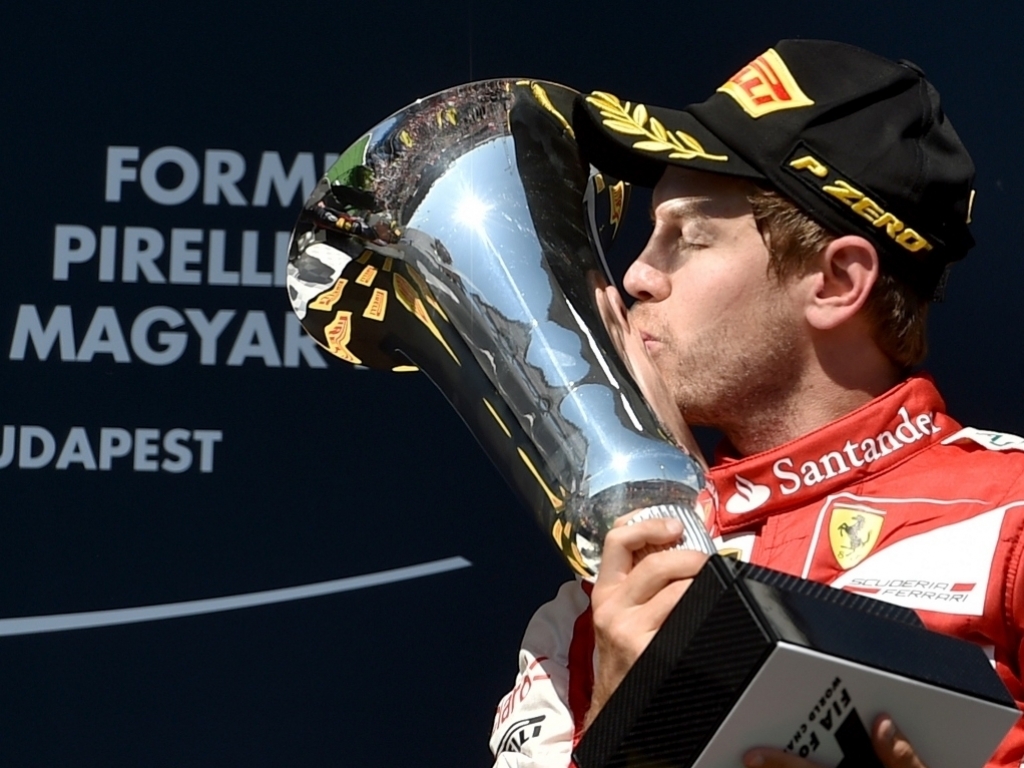 A flawless Sebastian Vettel, a floundering Lewis Hamilton and a feckless Pastor Maldonado…

Good Race
Sebastian Vettel; P1
He may have lacked the speed to challenge over one flying lap but Sebastian Vettel took his chances in Sunday's Hungarian Grand Prix, jumping both Mercedes drivers off the line. Refusing to give an inch, probably in the fear that if he did they would scamper into the distance, Vettel held his line and led the first lap of the Budapest race. From there he did not put a wheel wrong as he edged away from the chasers. Showing great race pace, the only threat to Vettel's victory was a late restart. And even that could not get the better of him as he raced to his second win as a Ferrari driver. Flawless, faultless, brilliant.

And he topped it all with an emotional tribute to Jules Bianchi: "You will always be in our hearts."

Daniil Kvyat; P2
It was a first Formula 1 podium for the young Russian driver and a lesson in why one should never give up. Now while all at PlanetF1 are a bit confused as to how/why he "didn't really know what it meant" to never give up until Sunday's race, we are still impressed by his second place. And, unlike his team-mate, he managed to do it without taking out half the field. A relatively quiet afternoon for Kvyat, just one penalty for exceeding the track limits, followed by a result that will surely put an end to rumours about his future.

Daniel Ricciardo; P3
Following his podium finish in Hungary, his first top-three result of the season, Daniel Ricciardo said he "left it all" out on track and, yip, he really did. Contact with Valtteri Bottas, Lewis Hamilton and Nico Rosberg – some more his fault than others – not only demonstrated that Ricciardo is willing to race, and race hard, but it also showed that the camouflage livery from pre-season is not the RB11's only link to tanks.

Max Verstappen; P4
So close, so very, very close. Max Verstappen crossed the finish line in fourth place in Hungary after a drama-free and mature drive. How he must have been wishing for the damaged Red Bull ahead of him to fall apart – or least get a penalty or two. But still, a P4 is an exceptional result for the teenager whose stock continued to rise.

Red Bull Conveyer Belt
The top four drivers in Sunday's grand prix all came through the Red Bull junior ranks. And you'll be comforted to know that Christian Horner was very quick to point that out.

McLaren; P5 & P9
After the multitude of jokes about Fernando Alonso pushing his McLaren faster than it would go under Honda power after breaking down in qualifying, a P5 in Sunday's grand prix was unexpected. And his team-mate Jenson Button making it a double points-haul even less so. But that's exactly what McLaren-Honda achieved in Hungary, their first double top-ten of the campaign. Now up to 17 points, they are just five behind Sauber and closing in on eighth place.

Formula 1
At a time of Mercedes dominance it is good for Formula 1 when someone else wins a grand prix; it's even better for the sport when that someone races for Ferrari. The iconic brand has undoubtedly the largest global fan base so a Ferrari on the top spot is something to be applauded. The fact that it was a thrilling race behind said Ferrari – plenty of drama and tyre strategy intrigue – is a bonus for the sport.

Bad Race
Lewis Hamilton; P6
On Saturday he hailed his Hungarian performance as "one of the best" as he secured the practice hat-trick and topped all the qualifying segments on his way to pole position. But a day later it all came to naught when he had a "very bad day in the office." What an understatement. A dreadful start, an off-track trip through the gravel and a late game of argy-bargy with Daniel Ricciardo meant Hamilton was lucky to finish the grand prix, never mind finish it in the points. "Lewis Hamilton raced around the Hungaroring like a man driving back from the Dog and Duck after eight pints" declared the Daily Mail while the Telegraph stated the Brit "raced more like a rookie than a two-time World Champion." Even Hamilton cannot argue against that.

Mercedes Engines
Although the nature of the Hungaroring circuit means horse power is not the be-all and end-all, it still came as a surprise (more like a shock) to Mercedes that their highest-placed car was P6. At a time where Mercedes power is dominating the world of Formula 1, it was an unpleasant result for the engine supplier. To put it simply, the last time Mercedes failed to put a car on the podium was at the 2013 Brazilian GP. And you'd have to go back to that year's Japanese GP to find a race where Mercedes fared worse than they did on Sunday.

Williams; P12 & P13
Felipe Massa was never able to fight back having been handed a five-second penalty for being out of position on the grid, a silly mistake, while a puncture late in the race – "at the wrong time" – cost Valtteri Bottas. A P12 and 13 meant Williams recorded only their second non-points scoring race of the Championship.

Pastor Maldonado; P14
Hitting Sergio Perez, speeding in the pit lane and overtaking behind the Safety Car. No, that's not the list of the race's infringements, rather that's just Pastor Maldonado's transgressions on the day. He blames the strict stewarding. Everyone else blames Pastor. And with two penalty points added, he's now halfway towards tallying up enough penalty points for a race ban.

Force India Reliability
The Force India is normally a very reliable car but not so in Hungary. The new B-spec VJM08 flipped on Sergio Perez on Friday after a suspension failure while a front wing failure sent Nico Hulkenberg hurtling into the tyre barrier at pace on Sunday. The team blamed the loading of the Hungaroring's kerbs for the two crashes. But it must be noted that none of their rivals suffered similar incidents.