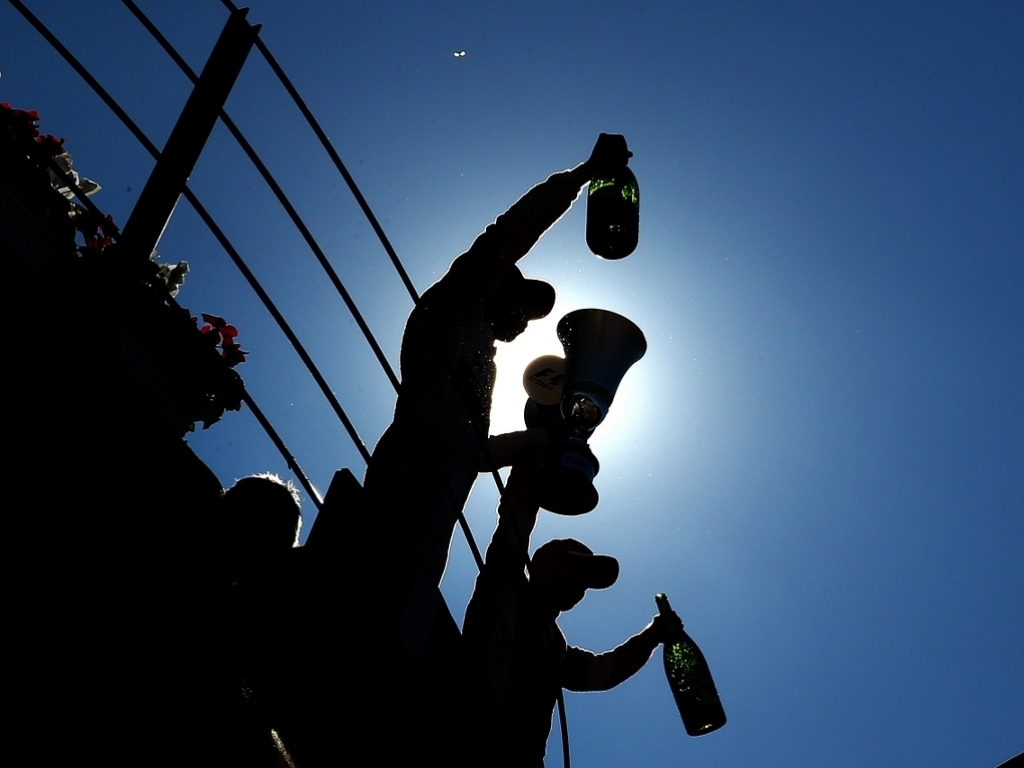 Controversy aside, Lewis Hamilton was brilliant on Sunday while Jo Bauer has a lot to answer for…

Good Race
Lewis Hamilton, Rightly Deserved
Say what you want about Lewis Hamilton being the only driver out on track with the upgrade for an already superior engine or about his tyre pressure being 0.3 PSI too low but the Championship leader fully deserved his Italian Grand Prix win.

He was untouchable on Sunday afternoon as he stormed away from Sebastian Vettel to become the first driver since Damon Hill in 1993/94 to win back-to-back Italian GPs. And after a brilliant drive to the chequered flag, he kept his cool when grilled by the media about his tyre pressure. Instead of reacting, he said "what will be, will be."

Blondes do have more fun and Hamilton proved that at Monza.

Sebastian Vettel, His Best P2 Ever
Two years ago Sebastian Vettel was booed on the Monza podium, this year he was greeted by wild applause. Amazing what swapping teams can do for a driver.

He may not have won the Italian Grand Prix this time around but Vettel's runner-up result on Sunday, his first Monza podium as a Ferrari driver, was almost as good as a win for the tifosi as the Scuderia's recovery continues.

Once again proving himself and Ferrari to be the best of the rest, the World title may be a leap too far but runner-up in the Championship is now within his reach.

Felipe Massa, Turning Back The Clock
Felipe Massa is up to fourth in the Drivers' Championship having returned to the Monza podium on Sunday. The Brazilian had a flawless afternoon at what used to be one his 'home' races and even held off Valtteri Bottas – often referred to a future World Champion – to take the final podium position.

Kimi Raikkonen, Sitting On The Pit Wall
Does an epic race filled with diving passes make up for an awful start that drops a driver from P2 to P20? That's the question surrounding Kimi Raikkonen's Italian Grand Prix.

The Iceman melted under the Italian sun as his SF15-T went into anti-stall, which pretty much looks like a stall to those outside the car. Raikkonen, though, got going and put in six fantastic laps to slice his way from P20 to P9. It took him another 47 laps to make up five more positions.

A dreadful start followed by a spate of epic racing turned into a good Sunday for the Finn – and for the fans.

Force India, Back Up To Fifth
A double points finish for Sergio Perez and Nico Hulkenberg saw Force India shoot back in front of Lotus in their battle for fifth in the Constructors' Championship. In a car still waiting for its complete upgrade, Perez and Hulkenberg finished sixth and seventh. Perez is even inside the top ten in the Drivers' Championship after Sunday's result.

Marcus Ericsson, Hat-Trick
That's a first Formula 1 hat-trick for Sauber's Swedish racer as Marcus Ericsson has now finished three successive races inside the top ten. He may not be far inside it but at least he's slowly but surely helping Sauber keep McLaren at bay (now there's something I never thought I'd write). And he's getting the better of the much-heralded Felipe Nasr in the process.

Bad Race
Nico Rosberg, Powers To Retirement
Nico Rosberg was closing in on Sebastian Vettel for second place on Sunday afternoon so Mercedes decided to turn his engine up to give him a welcome power boost. It gave him a retirement.

The German's engine, an older spec Mercedes unit given that coolant leaked into his upgraded one on Saturday morning and "contaminated it", meant Rosberg was always on the back foot compared to team-mate and pace-setter Hamilton.

At least he was the first into the showers.

Lotus, Peacock To Feature Duster
From hero to zero, or as one journo put it, from the peacock to the feather duster. That was Romain Grosjean's fall from grace.

Two weeks after celebrating his first podium of this season, he was left to rue another DNF as he retired from the Italian GP when his E23 was damaged in a first lap collision. It was huge disappointment for Lotus at a time when the team really needs to find reasons to smile.

Oh yes, Pastor also retired due to a crash.

One minute Fernando Alonso was 11 seconds behind Button, the next – well it took a bit longer than that – he had caught his team-mate. But the very next minute he suffered a loss of power and retired his MP4-30.

Another point-less race for McLaren-Honda and seemingly another pointless weekend overall.

Jo Bauer, Deflate-Gate Mini-Saga
Pirelli issued a directive regarding what they deemed to be the safe minimum tyre pressure for their rubber. Mercedes were under it. The FIA's technical delegate Jo Bauer was aware of this having measured the rear-left tyres on the grid and yet he allowed two drivers to leave the grid with what theoretically deemed to be unsafe tyres.

At a time when motor racing is still hurting from two tragic deaths, the FIA allowed Hamilton and Rosberg to race. Don't slate Mercedes, be angry at the FIA.