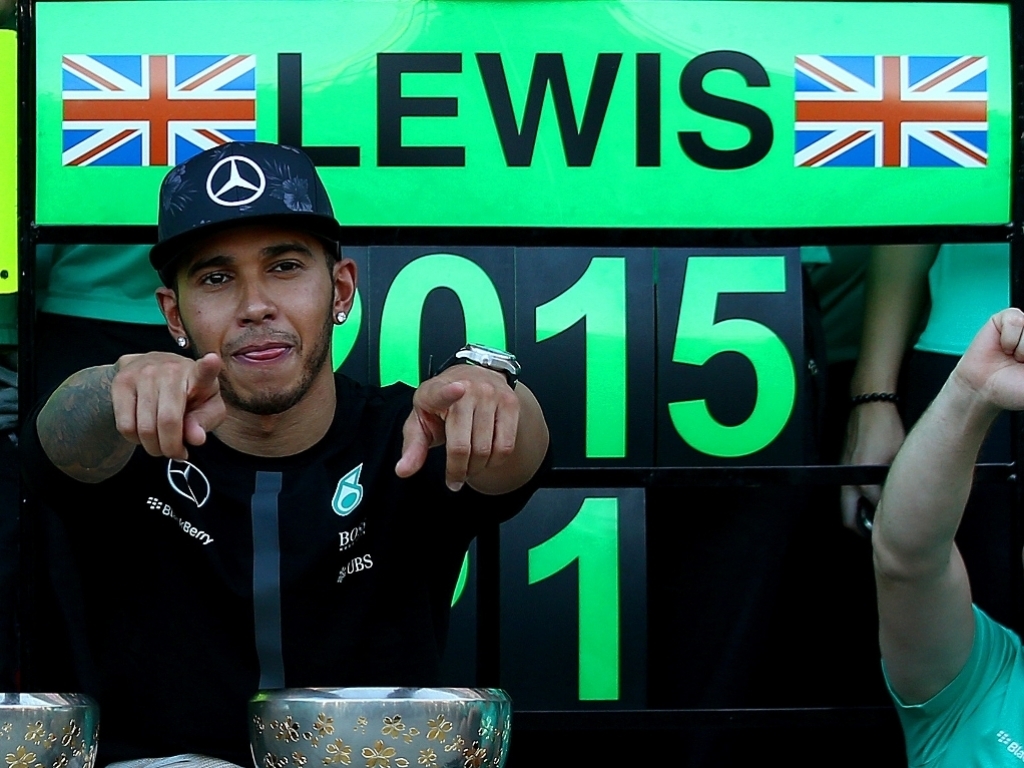 Good Race
Lewis Hamilton, Back On The Winning Trail
He has done it, he has finally done it. Lewis Hamilton has tied with boyhood hero Ayrton Senna on 41 race wins. He was meant to do it last time out in Singapore but a blip on the Mercedes juggernaut run to yet another World title put paid to that. And although having achieved that stat in Japan meant he needed a race more than Senna, that did not lessen the emotions for the Brit.

But aside from a robust pass on Nico Rosberg there is not much that can be said about Hamilton’s race as one minute he was taking the lead and the next that we saw of him he was winning the grand prix.

Another big step towards a third World title – same number as Senna – as his lead in the standings is now up to a commanding 48 points.

Sebastian Vettel, Best Of The Rest
On a weekend where Ferrari had no answer to Mercedes’ power and pace, Sebastian Vettel got the maximum he could with a P3. The German initially held off Nico Rosberg but when all was said and done he was P3, two seconds behind his compatriot with whom he is pretty well matched – Rosberg has the better car but Vettel is the better driver – and a whopping 20 behind Hamilton – better car and better driver.

Vettel’s podium was his seventh for a Japanese GP and he is now just two away from Michael Schumacher’s Japanese record.

Nico Hulkenberg, Undercuts to P6
Nico Hulkenberg had a solid afternoon at Suzuka as he worked his way to sixth place. Up to eighth after the first lap, Force India used the undercut – stopping early in the first stop – while Hulkenberg used his pace to overhaul the Lotus drivers. P6 equals his best showing for 2015.

Lotus, Rising Above
If it is not a bailiff and the threat of impounding, it is a lock on the hospitality door and the threat of no lunch. That’s the Lotus story for 2015 as their money troubles continue to dog them. Romain Grosjean, though, said it would not stop them out on track and it didn’t. He finished P7 to Pastor Maldonado’s P8, put some breathing room between Lotus and Toro Rosso and grabbed free lunch over at Renault. The irony, he’s (reportedly) walking away from the very hand that fed him – Renault – at the end of this year in favour of a Haas drive.

Max Verstappen, Oh That Pass
Max Verstappen went head-to-head with Fernando Alonso and won. He may be in the better car and he may have the better engine (shocking things to say about Toro Rosso v McLaren and Renault v Honda but it is true), but he still needed the balls to go for it. Added to that he overtook Carlos Sainz late in the race just to show his team-mate how it is done.

Jenson Button, Playing The Game
Somehow a rumour that must have come from someone started last week suggesting that Jenson Button would be announcing his retirement at Suzuka. Instead he said he is staying put and has no clue where the story came from. Days later McLaren said of course Button is staying, we want him to stay. Oh and Jense here’s your pay rise. Well played.

Bad Race
Nico Rosberg, Bye Bye
A driver finishes second and yet is it a bad race? Seriously? Well it is.

Nico Rosberg started from pole position but two corners later he was down in fourth place, once again losing out in a head-to-head with Hamilton. He recovered to P2 – well done. But he had kissed the World title goodbye.

Losing yet more ground to his team-mate, Rosberg is now 48 points behind. And since 2010, when the latest points-scoring system was introduced, no driver has ever come back from more than a 24-point deficit in the final five races. That makes for pretty bad reading if you ask me.

Mercedes Sponsors, None Were Seen
Mercedes’ sponsors may be wondering why they spent millions putting their logos on the teams’ cars, after all they were barely shown on Sunday. Conspiracy theorists suggest it was down to Bernie Ecclestone showing his displeasure at Mercedes for not supplying Red Bull with engines. Mercedes have all but scoffed at that suggestion. But it wouldn’t be the first time. Remember Force India in Bahrain back in 2012…?

Fernando Alonso, Moaning McLaren Misery
Fernando Alonso is insisting he won’t walk away from McLaren but that could be because the double World Champion is waiting to be fired. At least it looked as if that was his goal on Sunday.

Points be damned, embarrassing the bosses was the story of his day.

Yes he was frustrated, yes we completely understand but you don’t carry on like that at your engine partner’s home race. He called McLaren’s performance “embarrassing, very embarrassing” over the radio and later labelled his Honda engine a “GP engine.” Now personally I think the GP2 engine suppliers would be insulted by that but no one would have taken more umbrage on the day than Honda. Japan is a proud nation and he insulted them at their home race. Not the way to win friends or influence people.

Red Bull Racing, Limped Home
Daniil Kvyat’s Japanese GP saw the Russian racer suffer the biggest crash of his life. Watching, it was a hard hit. Being the driver, even harder. Being the car, well it was destruction. His car was rebuilt overnight and perhaps Red Bull didn’t quite put all the pieces back correct as Kvyat never had the pace but definitely had enough problems – “the brakes, the tyres and no overtake button.”

As for Daniel Ricciardo, a puncture on the first lap that resulted in floor damage put paid to his Sunday as a rather boring Japanese Grand Prix meant there was never any opportunity to fight back in a damaged car.

Felipe Nasr, Almost Ruined A Good Stat
The Japanese Grand Prix will go down as the first race since the 2011 European GP where all the cars were classified. Felipe Nasr did his damndest to ruin that. He parked his Sauber with four to go but was still classified as he completed 90 percent of the race. And even though he retired, he was only a lap down on Will Stevens.