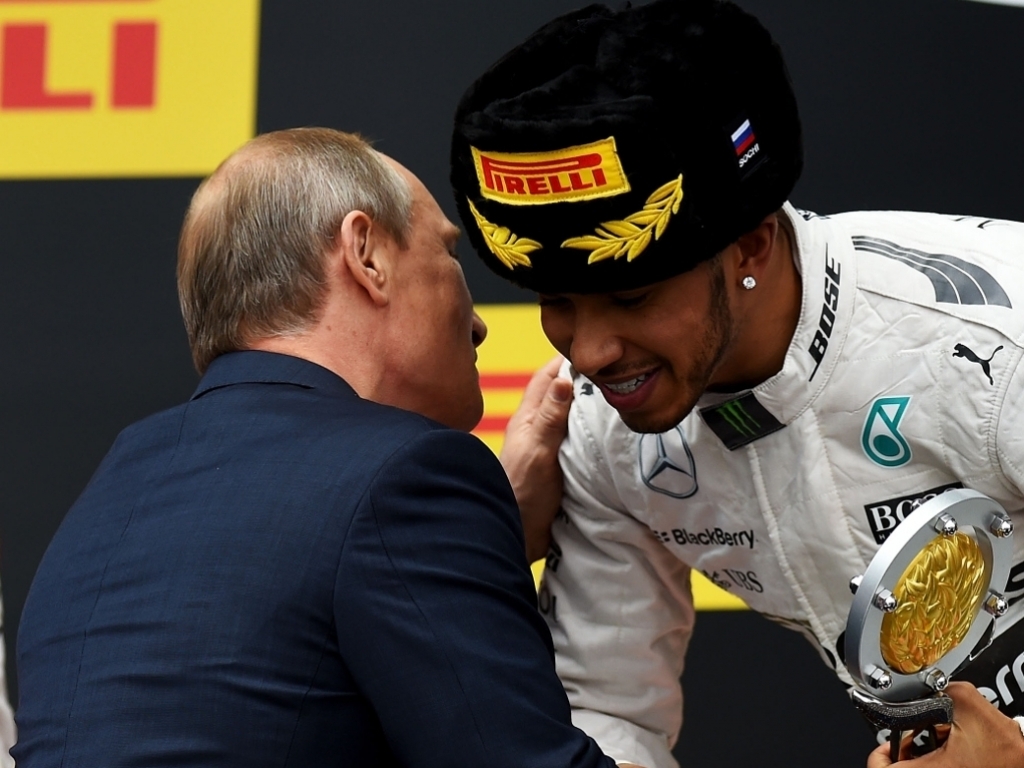 Lewis Hamilton
Lewis Hamilton had 25 reasons to celebrate on Sunday as he made the most of his team-mate’s bad luck to take his ninth win of this season. That moved him a step closer to the World title. In fact with 66 points between him and second-placed Sebastian Vettel, Hamilton can start clearing out space for his third Drivers’ trophy.

That’s of course if he escapes the wrath of president Putin.

First it was grid-girl-gate, now it is vet-Vlad-gate. Earlier in the year Hamilton came in for some stick for spraying champagne in the face of one of the ladies on the Chinese GP podium. Wonder what will be the ramifications for him spraying Putin.

The ramifications of Hamilton’s win were felt in the Constructors’ Championship as Mercedes won that with four races to spare.

Sebastian Vettel: Best Of The Rest
Eleven podiums from 15 races, four in a row and P2 in the Drivers’ Championship. Simply put it was a great Sunday for Sebastian Vettel.

Sergio Perez: Best Of His Best
One of the first to pit in Sunday’s Russian Grand Prix, Sergio Perez had it all to do as he raced towards the Sochi podium. But with his Pirellis fading away and those behind on fresher rubber it was only a matter of time before he was caught.

Perez, though, put in a valiant effort before he was overtaken by Valtteri Bottas and Kimi Raikkonen. And while even a P5 would have been a good result, the two Finns playing tag meant Perez was soon back on the podium. The fifth of his career.

Daniil Kvyat: Points At Home
The win and the podium were never going to be possible so good points at home were Daniil Kvyat’s goal arriving in Russia. Objective achieved.

Racing in front of his home crowd and even past a grand prix stand named in his honour, the Red Bull racer had a quiet and steady Sunday afternoon that yielded a P5 and his first F1 points at home.

Now if only he had a secure job for next season.

McLaren: So Close To A Double
Jenson Button brought his MP4-30 home in ninth place and Fernando Alonso tenth. However, it later emerged that the only reason the Spaniard was so quick was because he kept cutting the corner at Turn 16. Alonso was handed a five-second penalty and dropped outside the points to 11th place.

But at least McLaren-Honda know for sure there are ways to make the car quicker.

The German did everything right. He claimed pole position, he led off the line, he held his nerve to keep Hamilton behind him, and then he did it all again after the restart. And then his throttle stuck.

It was not the first time that Mercedes’ (very few) reliability gremlins have hit Rosberg hard in the run-in to the title. But with his deficit now 73 points, this time it has signalled the death knell to his title hopes.

The Ferrari driver may have received a 30-second penalty but that did absolutely nothing to ease Bottas’ pain from losing a podium and 15 Championship points.

As Bottas so rightly said: “WTF did he just do?”

Kimi not only joins Bottas in the bad race column but will also have to sit on the naughty chair.

Romain Grosjean: It Doesn’t Get Any Bigger
Romain Grosjean billed his Sochi hit as “one of the biggest” of his career and judging by the debris it definitely was. He lost the rear end of his E23 at Turn 3, went onto the marbles and slammed in the barriers, shredding both the barrier and his car.

He’s ok. That was the only ‘good’ to his Sunday.

Carlos Sainz: Taking The Good With The Bad
You have to feel for Carlos Sainz. After coming through a horrifying crash in final practice in which he was buried under the Tecpro barrier having hit with the impact on 46G, he started Sunday’s Sochi race from the very back of the grid.

Despite that he worked his way into the points only to suffer a brake problem that resulted in two spins, a meeting with the barriers and a damaged STR10. He retired.