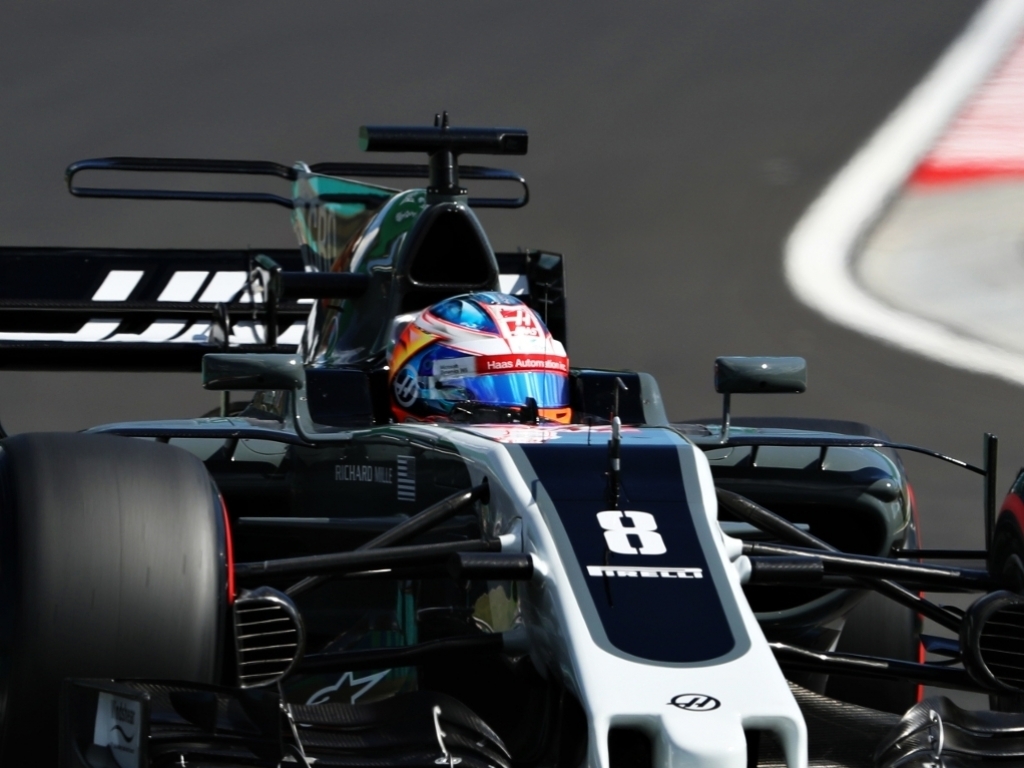 Heading to Brazil for the penultimate race of this season, Haas need to “get everything out” of their VF-17 as they look to overhaul Renault in the midfield battle.

Romain Grosjean
You endured a difficult weekend in the last grand prix in Mexico City. What were you struggling with and was it specific to the Autódromo Hermanos Rodríguez or do you expect to face similar challenges in Brazil?
“Well, we struggled in qualifying with both cars. We didn’t really have any pace. In the race, the pace was better but, unfortunately, my car was badly damaged following the contact with Fernando Alonso. So, we really struggled during the race with the damage. I lost a lot of downforce from the floor. It was a difficult one. I’m hoping that Brazil will be a little less challenging. Hopefully, we’ll get better performance, which was the case last year. Mexico is a very special one, with the altitude and the cooling, and so on. We didn’t have much downforce on the car. Obviously in the race, when we could’ve made some ground, the damage didn’t allow us to do so.”

When you have a tough weekend, do you dwell on it or do you try to put it out of your mind as quickly as possible and focus on the next race?
“I think having a family is really good in this aspect. I go back home and I play with the kids. They make you forget you’ve had a tough weekend. You can always learn from it, and you need to learn from a tough one, but it doesn’t put you down as it would if you maybe didn’t have a family. They just boost me again, and I just use the experience to move forward.”

With only two races remaining, the midfield is as tight as ever, specifically among Haas F1 Team, Renault and Toro Rosso. How would you characterize this battle, and do you find yourself looking at the time sheets to see where you stack up to the drivers on those teams?
“I think out of those teams, Renault is the faster one. They’ve got a really good car through to the end of the season. They’ve had a bit more of a difficult time in the races, which has allowed us to close the gap and keep them in sight. Toro Rosso is the one we can try to go for. They’re not performing better than we are, and they’ve got less experience amongst their drivers, so that should help us. We’re going to do everything we can to get those positions because it’s very important for the team.”

Whenever Formula One travels to Brazil, Ayrton Senna’s legacy is prominent. Of all his races, is there one that stands out for you?
“Brazil is always special because of Ayrton Senna. He was one of the biggest names in Formula One. Interlagos is a special place. There’s so much history there. On raceday you’ve got so much support from the fans. I remember Ayrton winning there in 1991 when he couldn’t hold the trophy in the air because he was so tired and had the pain in his arms from driving.”

Interlagos was resurfaced prior to the 2014 race. How much has the track changed since then and what do you expect this year with another year of weathering to the track surface?
“It was good because it was very bumpy. Unfortunately, some of the curbs were changed and the nature of the track changed a little bit, which is a bit of a shame. Generally, it’s a track I really like. It’ll be interesting to see how it’s evolved with the heavy rain we know you can get in Brazil. We’ll just go out there and see what we can do.”

Interlagos appears to be a very physical track, and heat often plays a role in the performance of the car and the driver. Considering these variables, how do you attack the track?
“It’s a pretty tough track with not much opportunity for a rest. Even in the straight lines you can’t rest as much as you would like. You’re at altitude as well, at 800 meters (2,625 feet), so coming from Mexico that’s nothing, but you’re still not at sea level. The weather can be challenging. It can be very warm and humid. It’s a pretty intense challenge but, at the end of the day, that’s what we’re looking for.”

Last year’s Brazilian Grand Prix was run in the wet, but in 2015 when the race was run in the dry, the top-three finishers used a three-stop strategy. What needs to happen to make a three-stop strategy work over a typical, two-stop strategy?
“I think it’s the tire degradation and the tire delta time between the different compounds. Let’s say you’ve got a soft tire, which is much faster than the medium, but degrades quite quickly, then you’re better with three stops. If you run the medium, and the pace that it brings compared to the soft is favorable, and the degradation is low, then you should go for two stops. That’s how it’s calculated.”

What is your favorite part of the Autódromo José Carlos Pace?
“I like the Senna ‘S’, and the first few corners are pretty amazing.”

Describe a lap around the Autódromo José Carlos Pace.
“You go onto the pit straight and then big braking to go to the Senna ‘S’. Very tricky turn in on the left-hand side. You really want to be well placed for the right turn two, which sets you up for turn three and the second straight. Big braking to turn four, left-hand side, 90 degrees, a pretty good corner. Then you get to the middle part – turn five is a high-speed corner going up the crest. It’s tricky. Then it’s turn six and the hairpin on the right-hand side. We can’t use the curb as much as we used to. Turn seven is a left-hand side corner, no braking, just a lift off. It’s a bit of a strange one. The second hairpin is then on the right-hand side, a second high-speed corner going down the hill, prior to the last turn. It’s a left-hand corner where you really want to go early on the throttle because you’re facing a wall to go up to the finish line.”

Kevin Magnussen
You overcame a difficult Friday and Saturday last weekend in Mexico City with a sensational drive on Sunday, holding off Lewis Hamilton and Fernando Alonso to finish eighth and earn four valuable points. Talk about all that you endured last weekend and how satisfying your drive on Sunday was for you and the team.
“After a difficult Saturday, where we were all pretty down after qualifying so badly, it was awesome to get a good result and come back strong on Sunday.”

After the Mexican Grand Prix, you said your result felt like a victory. For those unfamiliar with Formula One, how does an eighth-place finish feel like a win?
“It’s really tough in Formula One and car performance plays a massive part in what result you’re going to get. After the poor qualifying we had, it showed we weren’t quite on top of the performance, and we didn’t think we were going to get points. On Sunday we delivered – almost over-delivered – to finish eighth and get those four points.”

The Mexican Grand Prix showcased the resiliency of you and Haas F1 Team. Despite the odds stacked against you before the green flag waved, you earned one of your best finishes of the year. How important is it to remain positive and go into a race with an open mind, regardless of your starting position?
“The result on Sunday showed that you should never give up, no matter what has happened leading up to the race. You can always over-perform and get something out of it, even if it looks bad. It shows what the team is made of.”

With only two races remaining, the midfield is as tight as ever, specifically among Haas F1 Team, Renault and Toro Rosso. How would you characterize this battle, and do you find yourself looking at the time sheets to see where you stack up to the drivers on those teams?
“It’s only one point now to Renault for seventh in the constructors championship, and it’s only six points to Toro Rosso. It’s extremely close and anything can happen in these last two races. We just need to be on top of everything and get everything out of it that we can. It’s not going to be easy. Those teams are doing well and they’re tough competitors.”

What is your favorite part of the Autódromo José Carlos Pace?
The Senna ‘S’ bend. It’s a nice flowing part of the track and it’s going to be challenging to see how fast it is this year with the new cars.”

Describe a lap around the Autódromo José Carlos Pace.
“Legendary and challenging.”