Home Uncategorized Grosjean ‘needs to clear his head and reset’ 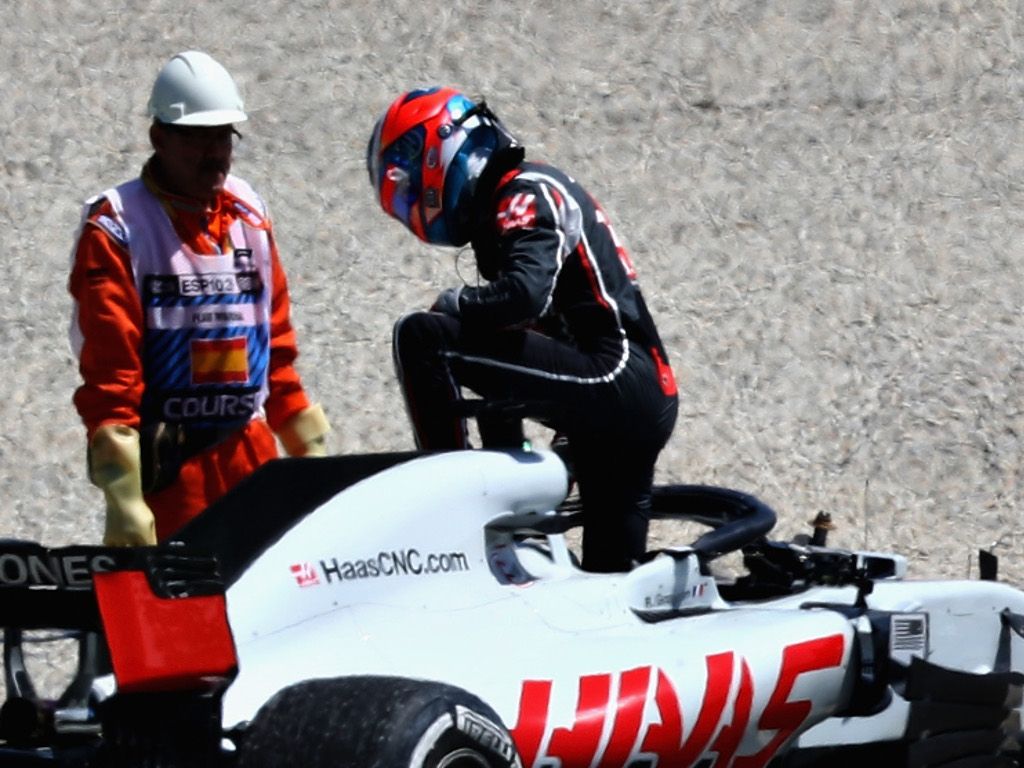 Romain Grosjean may have crashed behind the Safety Car in Baku but Jolyon Palmer believes his Spanish GP accident was the “worst” in a series of difficult moments.

Grosjean caused first lap carnage in Spain on Sunday as the Haas driver spun at Turn 3 on the opening lap.

Instead of braking, he kept his foot on the throttle and spun back across the track collecting Nico Hulkenberg while Pierre Gasly was also involved.

All three drivers retired with Grosjean later slapped with a three-place penalty for the Monaco Grand Prix.

Writing in a BBC Sport column, former F1 driver Palmer says this is Grosjean’s lowest point in a series of difficult moments.

“Romain Grosjean is going through tough times in Formula 1 and he hit a real low point with his crash on the first lap at the Spanish Grand Prix,” he said.

“The Haas driver lost his car mid-pack at Turn Three, span back across the track in a cloud of tyre smoke and collected the cars of Nico Hulkenberg and Pierre Gasly.

“I don’t remember an incident like it and I don’t think the stewards did either – which is why they have given him a three-place penalty at the Monaco Grand Prix.

“It is the latest – and worst – in a series of difficult moments for Grosjean this year.”

He added: “What I couldn’t understand was why he kept his foot planted on the throttle for so long afterwards.

“The result was the car drifting right back into the middle of a field of oncoming cars, creating a huge smokescreen for them at the same time, and on one of the fastest, most difficult sections of track. It was inevitable he would be collected by someone.

“I can only imagine his actions came out of frustration at spinning away a good starting position. But it was pretty dangerous and very foolhardy, as proved by the fact Gasly and Hulkenberg drove into him, unsighted by tyre smoke and with nowhere else to go.

“If Grosjean had applied the brakes as he spun on the outside, as is usually the case and the natural instinct when a driver loses control, I’m sure he would have come to a stop harmlessly on the run-off and got going again afterwards.”

Guenther Steiner is once again defending one of his drivershttps://t.co/V350EghKSd #F1 pic.twitter.com/kSRx14lB9M

This is not the first time that Grosjean has been in the midst of a troubled period.

The Frenchman was banned for one race back in 2012 after triggering a spectacular multi-car pile-up at the first corner of the Belgian Grand Prix.

Branded a “first-lap nutcase” by Mark Webber following another incident later in that season, he started working with a psychologist and came back a stronger, calmer driver.

Palmer reckons he again needs to take a step back and “clear” his head.

“Grosjean has the speed to get brilliant results on his day, and there’s plenty of time for him to turn it around yet,” he added.

“But first I think he needs to clear his head and reset.

“He did that before after receiving a race ban in 2012 for a spate of first-lap incidents.

“It appeared to work then, and I think he needs to draw a line under this start to the year and treat it as a 16-race season starting at Monaco in two weeks’ time.

“Of course it won’t help having a three-place grid drop on a track almost impossible to overtake on to kick it off. But he has to put that out of his head and move on quickly.”

There could, however, be long term consequences for Grosjean’s back-to-back crashes with Palmer predicting that the Frenchman has lost any chance he may have had of securing a Ferrari race-seat.

“When he switched to Haas at the end of that year with the hope of a future move to Ferrari, it seemed ambitious but not unrealistic. Now it seems impossible,” he concluded.