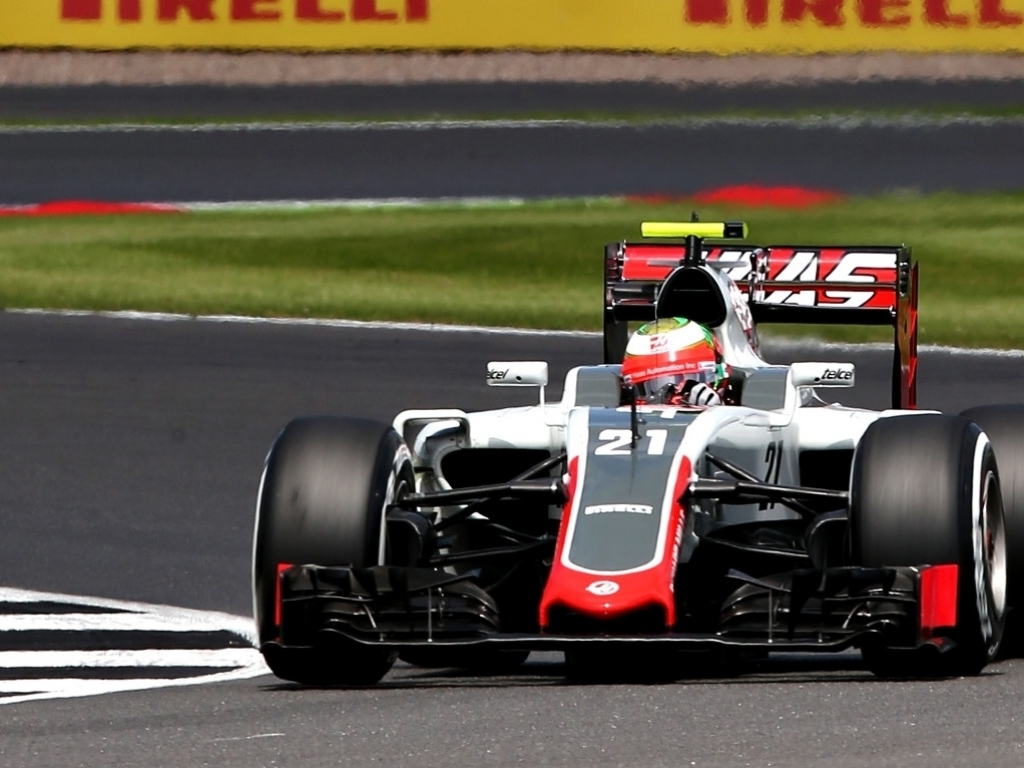 A home race for Haas' technical and chassis partners, Romain Grosjean and Esteban Gutierrez are looking to put on a good show in Italy.

Romain Grosjean
Ferrari and Dallara are two Italian companies that are technical partners of Haas F1 Team. How has their collective insight helped make Haas F1 Team so competitive in its first year in Formula One?
“It was vital. The whole idea of creating Haas F1 Team was based on the partnership with Ferrari and Dallara. We worked to have good cars and to perform as early as the first test. To do that, we had to get that partnership to work, which it did. I’m looking forward to being in Italy knowing the strength of those companies in our on-track efforts.”

Monza is the fastest track Formula One visits. What allows you to reach such high speeds at Monza?
“It’s the characteristics of the track, primarily a long straight line with a chicane followed by another long straight line. Everyone goes for low downforce levels. That’s where we go fast in a straight line. It’s a great track – a temple of speed. There’s always a great atmosphere around the circuit. I’m very much looking forward to racing there again."

Where are the overtaking opportunities at Monza?
“More or less everywhere.”

Is overtaking at Monza a bit like a drag race where it’s about who can get on the power the fastest and most effectively?
“It’s not as straightforward as a drag race. You still lose downforce when you follow another car out of the low-speed corners. It’s one of those races where you can have a lot of overtaking, a lot of action. It’s always interesting to see how it plays out with the big slipstreams.”

Monza is a track with a lot of history and home to some of Formula One’s most passionate fans. Can you describe the atmosphere there?
“The atmosphere is crazy in Monza. The Tifosi, the fans – they’re just great. The track is in the middle of a park. It’s like nowhere else. There are so many people coming and watching, cheering for the drivers and, of course, for Ferrari. The atmosphere is electric. I love it.”

Have you had the opportunity to walk around the old portions of Monza, specifically the oval? If so, what ran through your mind when you saw the banking and realized cars in the late 1950s and early 1960s actually raced wheel-to-wheel on that track?
“It was crazy! You can barely stand up at the top of the oval. We still go underneath part of it at the Ascari chicane. It was definitely a different time, a different era of safety measures. I’m sure it was good fun, though.”

Would you have liked to have competed in that era just to see what it was like, or do you prefer to compete with the latest and greatest technology available?
“I’d compete anytime. I’ve always loved Formula One racing, no matter the era.”

Do you have any milestones or moments from your junior career that you enjoyed at Monza?
“My first race in Formula Renault 2.0 in 2004 – the Eurocup Series – was at Monza, and I was on the front row after qualifying. That was quite good. Certainly a happy memory.”

What is your favorite part of Monza?
“I like the two Lesmos turns, the ‘Curva di Lesmos’.”

Describe a lap around Monza.
“You cross the start-finish line going into the first chicane with big braking, dropping down to second gear. Then you’ve got important acceleration going into the second chicane, which is a bit faster, a bit more curb usage on the exit. You then try and carry as much speed through the two Lesmos turns. Then you go under the old oval and into the Ascari chicane. There’s big braking here, with a bump. It’s always tricky to get the car there. Then you really want to go early on power to get to the Parabolica. There’s another very long straight line, with very late braking to the Parabolica. Again, tricky throttle application heading toward the start-finish line to set your lap.”

Esteban Gutiérrez
Ferrari and Dallara are two Italian companies that are technical partners of Haas F1 Team. How has their collective insight helped make Haas F1 Team so competitive in its first year in Formula One?
“I think it’s been really important to acquire the experience from Ferrari and Dallara. We gained a lot of knowledge, and from that point of view, it’s been a crucial part of our success.”

You’ve spent a lot of time with Ferrari, first with Ferrari power during your time at Sauber in 2013-2014 and then as the third driver with Scuderia Ferrari in 2015 before joining Haas F1 Team this year, where we also use Ferrari power. How helpful has it been to have such a deep understanding of Ferrari, its people and its methodology?
“It’s been really important. Ferrari works in a very particular way, which I find very nice and interesting, but you need to really understand the background in order to work efficiently. For example, the change of engines from one year to another was a big, big difference, and to have been through that transition helped me come here with a lot of experience.”

Prior to the summer shutdown, you were able to climb back into a Ferrari and test the 2017 Pirelli tires while driving a 2015-era car. How did it go and what kind of insight can you provide regarding the wider tires that will be used next year in Formula One?
“The tires are wider and you have more mechanical grip, which is what we are aiming for. We will have more downforce and it was great to get a preview of that in order to prepare myself, and also for the team to get a good idea, and for Pirelli as well to develop the right tires we need for next season.”

You set the fastest speed at Monza in the final year of the V-8 era (2013) when you wheeled your Ferrari-powered Sauber to a top speed of 341.1 kph (211.950 mph).  What was it like to extract that much speed from the car over the course of the track’s 5.793-kilometer (3.6-mile) layout?
“It was great! It was crazy because I remember exactly that moment when I was in the race with the DRS on, maximum speed, and I got a lot of speed down the straight into braking and it was quite an impressive feeling.”

Monza is the fastest track Formula One visits. What allows you to reach such high speeds at Monza?
“It’s interesting because you have a lot of high-speed sections, mainly straight-line sections with very low downforce, and this is directly affecting the braking of the slow-speed corners. When you have a long period of time when you’re braking, obviously the downforce is important, but the fact that you get very low downforce on this track, you need to cope with the car in different ways and you need to adapt the setup for that.”

Where are the overtaking opportunities at Monza?
“Basically, everywhere. You have turn one and you have turn four, as well as before the Parabolica. It’s a track that provides a lot of overtaking.”

Is overtaking at Monza a bit like a drag race where it’s about who can get on the power the fastest and most effectively?
“Yes, definitely.”

Monza is a track with a lot of history and home to some of Formula One’s most passionate fans. Can you describe the atmosphere there?
“It’s one of the classics. The people, the atmosphere, the Italians, Ferrari fans, and we’re using Ferrari engines, so it’s great to come there and enjoy nice support from the Italians, especially for me being part of Ferrari last year directly as a third driver put me very close to Italy.”

Have you had the opportunity to walk around the old portions of Monza, specifically the oval? If so, what ran through your mind when you saw the banking and realized cars in the late 1950s and early 1960s actually raced wheel-to-wheel on that track?
“Yes I did, and I wish that we could race that corner now. It would be fantastic. It’s incredible how steep it is, and you can only imagine in your mind how it was in those times, how crazy it was. It’s great to think about it because it’s the spirit of our sport.”

Would you have liked to have competed in that era just to see what it was like, or do you prefer to compete with the latest and greatest technology available?
“It’s a tricky question, but I like that classic era. Everything is relative, because in that era the technology was innovative at that moment, because you always push the limits of innovation. It would be nice to have a try to see how it would be, because I know how it is today, so obviously you want to get what you don’t have.”

Do you have any milestones or moments from your junior career that you enjoyed at Monza?
“I won a few championships there – two championships actually, Formula BMW and GP3. I remember exactly how it was. It was actually with a qualifying lap because it was enough to get one point from getting the pole position and that was enough for me to win the championship, so it was a very special moment. It comes always from Monza – a special place for me to get there and get that feeling.”

Describe a lap around Monza.
“You come down to the main straight to the first Variante, a very slow-speed chicane with big braking with quite a lot of low downforce, so the car has to be set up mechanically pretty well, similar for the second Variante. It’s important to get the right line because on exit, if you miss a little bit of the first apex, you are done for the rest of the corner. So, it’s important to be very precise. The two Lesmo (corners at Curva di Lesmos) have a little bit of banking. You’re holding a lot of speed in and getting the maximum grip on the apex. Then you come down to Ascari, which is one of my favorite corners – triple chicane, braking very late, turning in very delicately because by braking late you basically unsettle the car completely. You need to cope with it, using all the curb available into the first part and getting the right line through to turn nine in order to be flat at turn 10, which then brings up the speed through that straight line before the famous Parabolica. It’s a high-speed corner and very long. You throw a lot of speed into that corner.”