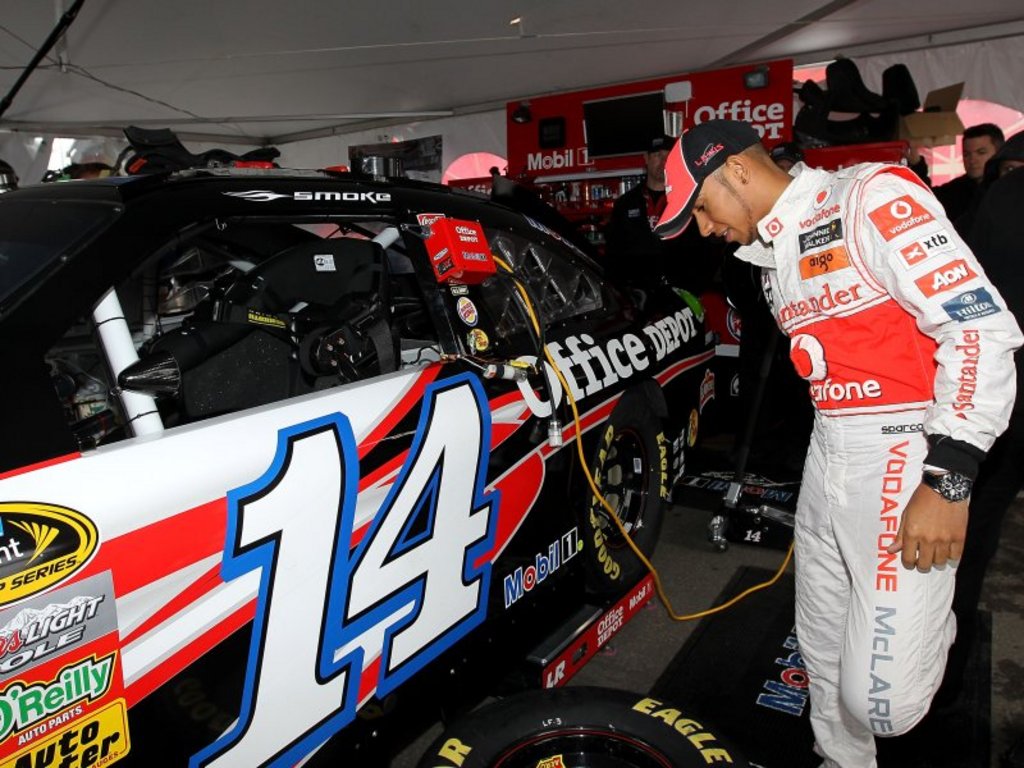 Lewis Hamilton put his Canadian GP nightmare to one side on Tuesday as he enjoyed a car swap with two-time NASCAR Champion Tony Stewart at the Watkins Glen International in New York.

In the current F1 betting, Lewis Hamilton is second favourite to bounce back with a race win at the European GP. For all the latest F1 odds on the race in Valencia, visit Sky Bet.

Hamilton, who had to watch the bulk of the race in Montreal from the side after crashing on lap eight, drove Stewart’s number 14 Chevrolet Impala while the American got behind the wheel of the title-winning MP4-23.

“Shake and bake. That’s what we’re going to do,” Hamilton said as he climbed into the car.

“I never in a million years thought I’d have the opportunity to drive a NASCAR. I don’t know what to expect. I know in NASCAR, you blow engines. We very rarely do that nowadays.”

After taking the car around the 3.4-mile road-course for a few laps and wowing the crowd with a burnout, Hamilton admitted the event helped him to forget the bad memories from Montreal.

“Whilst driving a Formula 1 car is very fun, the competitive side of it is so serious, whereas today I think, after even such a tough weekend… I was already still also feeling the tough weekend this morning. But as the excitement built up and when I got in the car, once I got out I forgot about last weekend.

“And I was just saying to Tony it would be quite cool – in the old days they used to have drivers who were able to do different races in different classes week after week. And I said if you wanted to come and drive a Formula 1 for a weekend and see how it went and then vice versa… I know that’s not possible nowadays but it would really be cool.”

The McLaren driver was impressed the Chevrolet Impala’s brakes.

“I think it’s three times the weight of a Formula 1 car, but actually [the Cup car] doesn’t feel that heavy,” said Hamilton. “The brakes were surprisingly good and Tony was telling me where they usually brake in the dry and I don’t think I was braking too far away from it with the damp conditions. I was braking early thinking, ‘this car is not going to stop’ and in actual fact I could brake a lot later.

Stewart’s drive in the MP4-23 got off to a shaky start, but he eventually got things right.

“I couldn’t even get it up high enough in the revs to get it to actually pull away in first gear. I kept having to reset it,” the American said. “I kept trying to tell myself, just get on the gas a little bit. As a competitor, you want to go out and find the limit. At the same time, you realize that if you make a mistake, the penalty for that mistake is going to be pretty harsh, so you may back it off a little bit just to enjoy the experience.

“Once we got rolling though, it was unbelievable. It’s just amazing what the capabilities of the car are. I told the guys on pit road that it’s probably going to make my crew chief a little more stressed during the weekends now because I’m going to want it to handle like that all the time. That was truly the experience of a lifetime.”