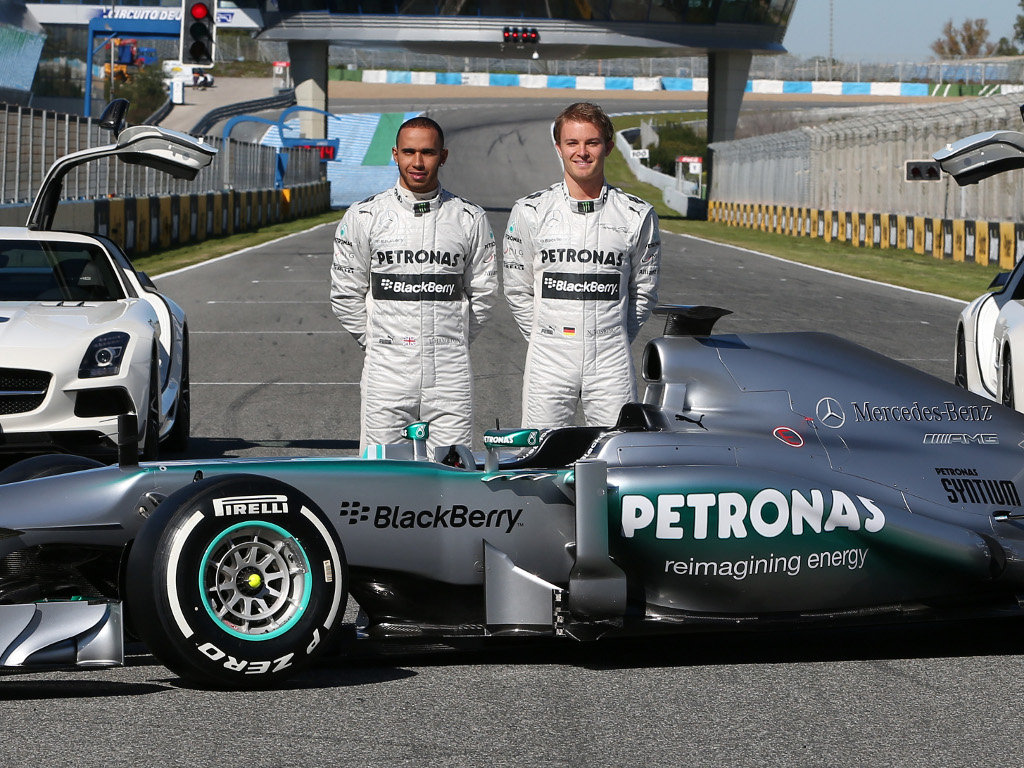 Merc may not have had the results, however, Lewis Hamilton is adamant he’s joined a team that is not only hungry for success but doesn’t know how to lose.

Mercedes may not have had the results, however, Lewis Hamilton is adamant he’s joined a team that is not only hungry for success but doesn’t know how to lose.

Mercedes officially launched their 2013 challenger, the W04, at Jerez on Monday afternoon, hours after Nico Rosberg had put in the first laps for promotional footage.

A “sophisticated evolution of last year’s car”, the W04 has a vanity panel hiding the stepped-nose, a new five-element front wing design and a second-generation Coanda exhaust at the rear.

The W04 will be the first Mercedes F1 car that Hamilton will race in a World Championship after the Brit swapped over from McLaren at the end of last season.

And although several F1 personalities have voiced concerns over Hamilton’s move, the 28-year-old believes he has joined a Formula One that is primed for success.

“It’s a very special day for me to officially present our Mercedes-Benz Silver Arrow to the world,” he said.

“There is no company with a longer history in grand prix racing than Mercedes-Benz and it is an honour for me to tread in the footsteps of legends like Juan Manuel Fangio, Sir Stirling Moss and Michael Schumacher.

“t’s the start of a new chapter for me, a new adventure, and when I walked through the doors in Brackley, I was so excited to get down to work. I’ve been at the factory for a few days now, getting to know the guys, meeting my mechanics and engineers, learning myself into the team and I have never seen a group of people that is hungrier for success than this one.

“They have been flat out this winter trying to pack more performance into the new car and I can’t wait to drive it and see where I can make a difference to help push the team forward with Nico.”

He added: “This is a new start for me with the team in Brackley but I have worked with Mercedes-Benz for a very long time now, and I learned one thing most of all: Mercedes-Benz doesn’t know how to lose.

“We are playing a long game here but I know we will have success together and I’m excited to be a big part of making it happen.”

Hamilton, though, downplayed the chance of Mercedes suddenly leaping to the front of the pack after they finished down in fifth last year with just one race victory.

“The target is to improve on last year. Last year they didn’t have a strong year.

“They got one win, but they didn’t have enough podiums, didn’t have anywhere near the success they deserved.

“This year is about one step at a time. Finish the first race, getting on the podium, and then trying to win races.”

Hamilton will put in his first laps in the new car late Monday afternoon as he too does his bit of filming.

“It looks a beautiful car, I’m really excited about getting into it and finding out what it feels like.

“I have no idea where it is at the moment apart from seeing some aero results, and the guys have made some improvements, but it is still an evolution of last year’s car.

“This year is about trying to get settled in the team, get a good working relationship and working to steer this car in the right direction and also next year’s car.

“We have to deliver as a team, of course, but I am not a miracle worker. I’m going to work as hard as I can with the team to make steps forward.”