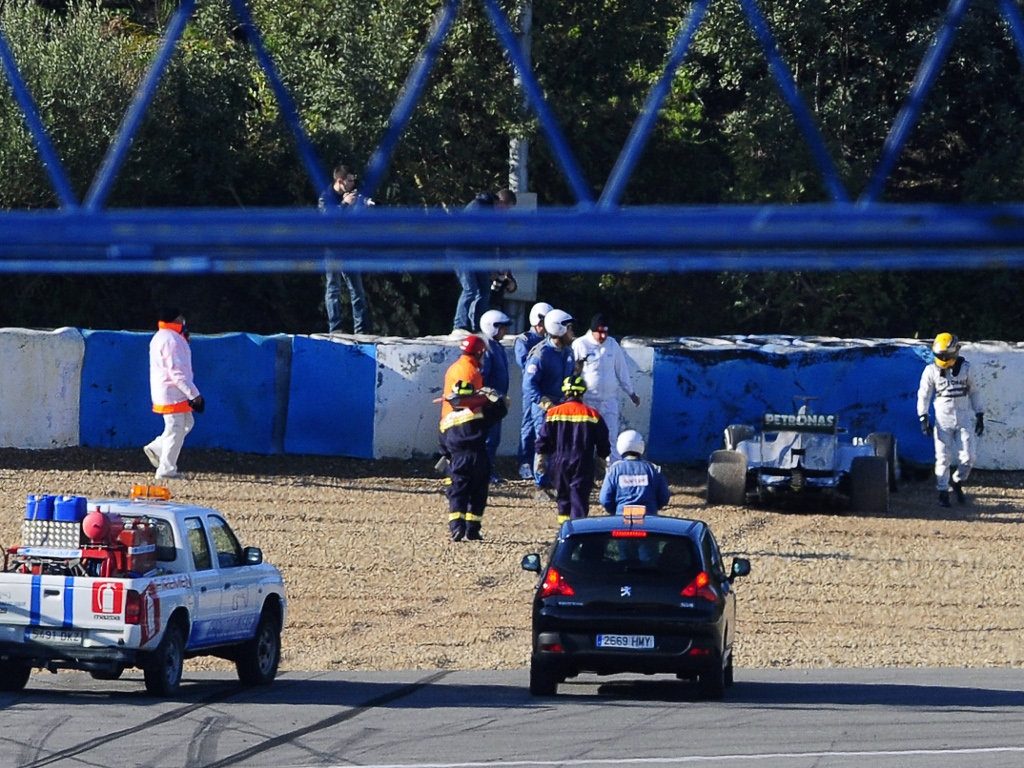 Lewis Hamilton is adamant Mercedes are already ahead of where they were last year despite only putting in 26 laps over two days of testing.

Mercedes’ start to pre-season testing has been a headache for the team as Day One saw an electrical problem and subsequent fire put an end to Nico Rosberg’s running after just 11 laps. He did not return to the action.

15 laps into the morning’s action Hamilton suffered a rear brake pressure problem which caused him to crash into the barriers at Dry Sack.

Mercedes were not able to send the Brit back out for the test of the day as it a complicated job repairing the hydraulic issue that led to the brake problem.

But despite their limited running, Hamilton insists he’s remaining positive.

“Mercedes are already ahead of where they were last year when they didn’t even have the new car here (at the first test in Jerez),” said the 28-year-old.

“It’s an improvement and a step forward already, so we can’t really complain.

“We’ve lots of tyres, so Nico needs to be the first out today, and we just need to hammer it and try and get in as many laps as possible.

“For me, I will be in early, go to the meeting in the morning and listen to the guys (over the team radio) during the day, maybe go training and chill a little.

“The important thing is not to get fazed by the days we’ve had this week. You have to keep looking forward and remain positive.

“The guys in the garage are obviously trying to avoid the problems we’ve had. They are working as hard as they can, back at the factory too.”

Hamilton added that he is complete confident that Mercedes will get on top of their recent car issues.

“They (the technical people) have to look at the design and ensure it doesn’t happen again, and I have total confidence they will do that.

“Obviously I wanted to be driving. We were looking at the computer and seeing other people doing 70 or 80 laps and we should be doing the same.

“We just need to find out what solutions we can grab and hold on to them.”