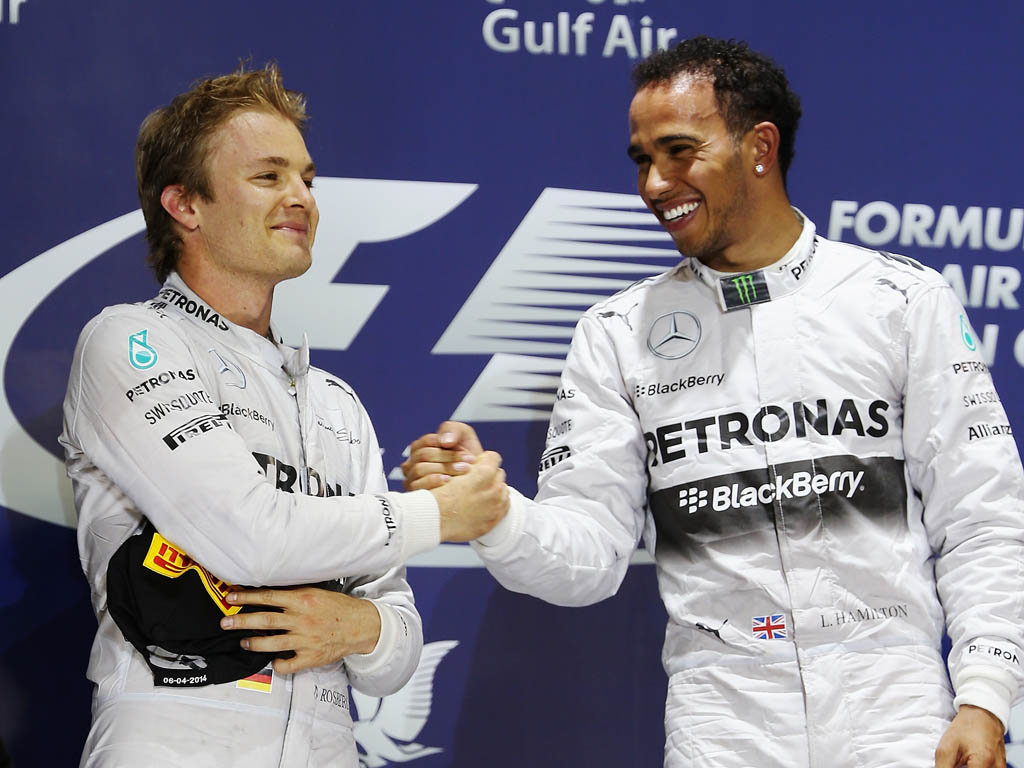 As the battle between the Mercedes drivers heats up, Lewis Hamilton has vowed to study up on Nico Rosberg in order to stay ahead…

As the battle between the Mercedes drivers heats up, Lewis Hamilton has vowed to study up on Nico Rosberg in order to stay ahead.

Hamilton claimed the victory ahead of his team-mate in Bahrain on Sunday night but it was a sharp contract to the previous race in Malaysia in which he went unchallenged.

This time around, Rosberg fought Hamilton wheel to wheel on several occasions as the Brit was unable to shake his team-mate.

Hamilton later revealed that Rosberg closed the gap with a bit of help from some studies on Hamilton with the 2008 World Champion saying he will now adopt the same strategy.

“Someone in the team did a huge study on my pace in Malaysia, and as we arrived in Bahrain Nico had this big document showing all the places where I was quick, and he used that to his advantage,” Hamilton revealed.

“So now I’ll do the same and hopefully I can capitalise.

“I have to study hard, work hard, over these next two weeks. I’m going to be giving it a lot of digestion.

“But what an incredible team this is with their determination, putting the car together, taking it apart, pit stops… They are just faultless.

“Naturally, we are going to be on the limit, and every now and again we will all make mistakes, but I’m very, very proud to be working with these people.”

Hamilton added that he was happy with his efforts in Bahrain where he stayed late on Saturday night, examining all the data in a bid to find more speed.

“I worked so hard over the weekend. I stayed extra, extra long after qualifying on Saturday to find every little detail because I knew I didn’t have the ultimate pace this week as I did in Malaysia.

“You can’t be the quickest at every single track. There are going to be tracks where someone gets it a bit better than you, and he was particularly strong there.

“When you have that kind of pressure on you, you want to make sure you are on the limit without making mistakes, and I didn’t make any mistakes, so I couldn’t be any happier.”

Meanwhile, Mercedes have made it clear that they will allow their drivers to race until such a time as someone crosses the line.

Asked whether his drivers were free to race, Mercedes motorsport boss Toto Wolff said: “Yes, until we lose some front wings and then we’ll sit down again and discuss whether this was the strategy. But they are racing drivers so it is all academic.

“I think you need the drivers to understand where the team came from and it’s important not to risk the image of our brand.

“We represent a big brand so we need to know what to do. And they did it in a fantastic and spectacular way.”