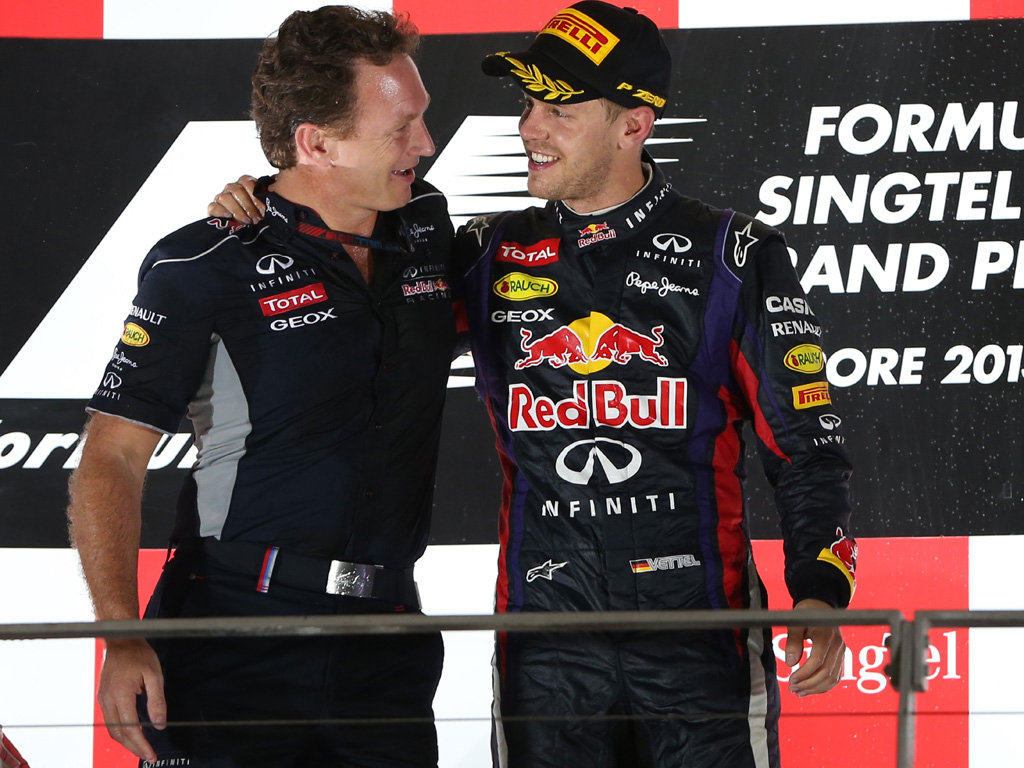 Red Bull are determined to secure both titles “as soon as possible”, according to team principal Christian Horner…

Red Bull are determined to secure both titles “as soon as possible”, according to team principal Christian Horner.

Sebastian Vettel took another major stride towards claiming a fourth consecutive World Championship in Singapore on Sunday as his win helped him to open a 60-point gap over Fernando Alonso while the team also sports a 103-point lead over Ferrari in the standings.

With still 150 points to play for, Horner hopes the team will finish things off as quickly as possible and not go through the same torture as last year when Vettel only won the title in the final race in Brazil.

Next up is the Korean Grand Prix and Vettel is clear favourite with Paddy Power to win and edge closer to the title.

“It’s my job to worry,” Horner is quoted as saying by ESPNF1. “You can’t become complacent in any way; we never have yet and we won’t certainly this year. Our approach is one race at a time, the next challenge is Korea – to get the most out of that venue – and then after that obviously Suzuka. If we keep doing that then the Championship tables tend to take care of themselves.

“We’ve had two bloody close ones that I don’t want to go through again. Brazil last year I’ve now got several grey hairs from, Abu Dhabi two years earlier was about as stressful as you could get. The most important thing is winning. We’re trying to defend both titles and our job is to try to do that as soon as possible. It’s not our responsibility to take it to the last race, which hopefully it won’t go to.”

The likes of Ferrari and Mercedes, though, are hopeful that they will be able to match Red Bull next year when the new engine regulations come into place and you can bet on this and more at Paddy Power.

Horner concedes it is difficult to predict how things will pan out in 2014.

“Next year’s a bit of a game changer and I think the power units are going to become a really key performance differentiator and whoever out of Ferrari, Mercedes and Renault gets it right or wrong on the power unit side could have a big effect on the pecking order and performance,” he said.

“Of course, nobody knows at the moment; everybody thinks they’re doing alright but until we turn up in Melbourne it’s going to take the first half of the year to see things settle down.”