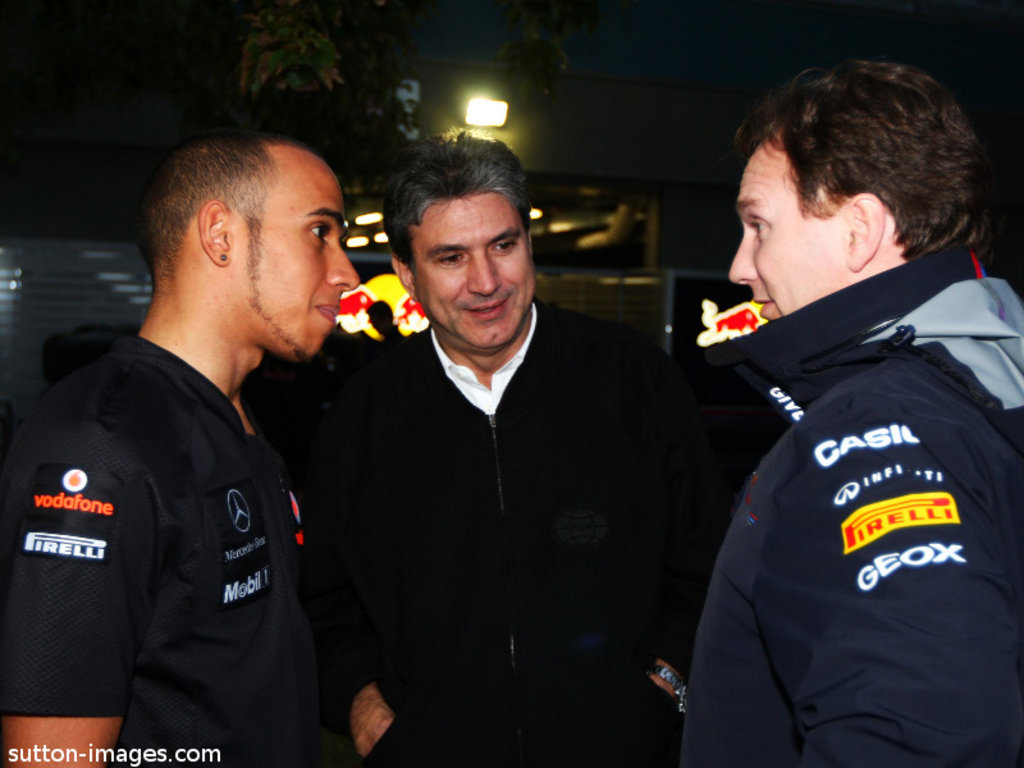 Red Bull boss Christian Horner has effectively ended any hopes that Lewis Hamilton will join Sebastian Vettel at the team.

Hamilton has been consistently linked with a position at Red Bull, with rumours intensifying after the Briton was seen meeting with Horner during the Canadian Grand Prix weekend.

It has since been revealed that Hamilton has a clause in his contract which allows him to leave McLaren a season early which would make him available to another team next year.

However, Horner has all but squashed any chance of Hamilton joining Vettel at Red Bull.

“On paper a Vettel-Hamilton line-up would be hugely attractive,” explained Horner.

“But you have to look at the reality, at how these things work, and history dictates that two world-class drivers in the same team has not always been the best pairing.

“You only have to think of Senna-Prost, Piquet-Mansell, or even Alonso and Hamilton.

“We are hugely happy to have Sebastian committed to the team long term, and with Mark (Webber), we’re very pleased with the job he is doing.

“Our focus at present is on those two drivers rather than looking to change anything.”

“At the end of the day it’s about winning. It’s not solely down to Red Bull to provide the entertainment. We do enough of that,” added Horner.

“If you look at any great team, be it with a football team, hockey team, across the disciplines, it’s about the unit working as such, and not about individuals.

“What we’ve managed to achieve here, and what’s hugely important, is that no individual is bigger than the team.

“I think it would be difficult to envisage a driver of Sebastian’s calibre and that of Lewis under the same roof.

“Lewis is a wonderful driver, and you can understand why he might want to drive a Red Bull. It’s obvious.

“But would it be the best thing for us? We have severe reservations it would be.”

With all the speculation surrounding a possible move for Hamilton, the position of Mark Webber has come under scrutiny but Horner is confident that the Australian will not be affected by the rumour mill.

“He’s been around long enough to know to ignore it,” said Horner.

“I believe he is comfortable in the team and if he had any concerns then I’m sure he’d ask me.

“We both agreed we’d sit down in the summer, and the key thing for both sides is that he has the motivation, desire and performance to continue.

“He is effectively demonstrating all of those at the moment, and so once we get a bit later into the summer, we will sit down and have what is usually a pretty straightforward conversation.

“There is no pressing need to do it at the moment. We’re in a fortunate position where we don’t need to rush.”

Conversely, Vettel is already tied down to a long-term contract with the team, with the German set to stay in Milton Keynes until the end of 2014. Having already racked up one World title and with another looking likely this year, Horner is understandably happy with the 23-year-old.

“In a shorter career he has already won more races than Lewis, had more pole positions and won the same amount of championships,” said Horner.
“We are absolutely delighted to have Sebastian. There is no driver in the paddock I would rather have on a long-term contract than Sebastian Vettel,” he added.