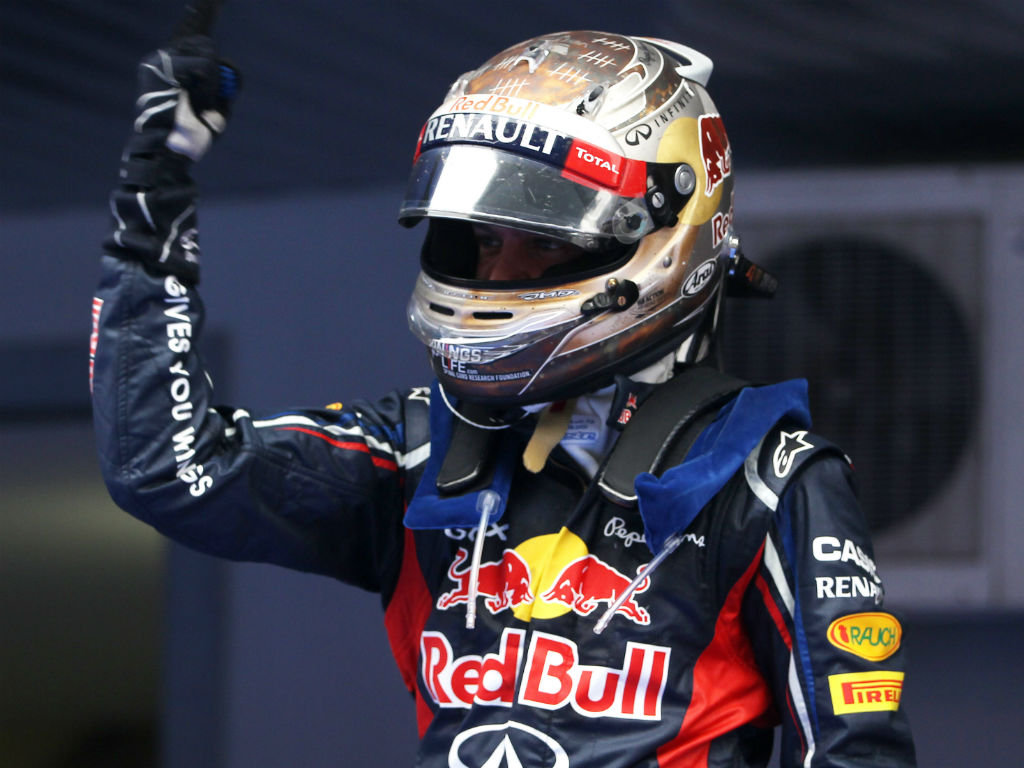 Germany’s Vettel, winner of the title in 2010 and 2011, cruised to his fourth consecutive victory on Sunday, leading the Indian Grand Prix from start to finish in a dominant display.

The 26th win of his career gives Vettel a 13-point lead over his nearest challenger, Fernando Alonso, who finished second at the Buddh International Circuit after starting fifth on the grid.

Red Bull enjoy a healthy 91-point lead in the Constructors’ Championship over Ferrari.

But speaking after Vettel’s consummate triumph in the heat and dust of New Delhi, Horner warned against complacency as he looked forward to the final three races of the season in Abu Dhabi, the United States and Brazil.

“We certainly cannot afford to be complacent because Fernando Alonso keeps turning up,” said Horner, after Vettel and his Red Bull teammate Australian Mark Webber sandwiched the Spanish driver in second place.

“He (Alonso) drove a strong race and it was a shame we couldn’t keep Mark (Webber) ahead of him, as he had a KERS issue from lap 20.

“We have got a great lead now in the Constructors’ Championship, but it is only 13 points in the Drivers’…. We have managed to eke out a gap and, considering where we came from four races ago, it is impressive.

“But we have to keep that momentum going. It is the first time Seb has won four races in succession and it was an incredible performance from him this weekend.

“With 75 points available from three races, it is going to be crucial for us to have perfect weekends now.”

The Red Bull team boss was unfazed by Alonso’s bullish talk that he will win at Interlagos in Sao Paulo on November 25 to take his third World Championship crown.

“Talk is cheap at the end of the day,” Horner said, when reminded that Alonso has said he is “100 percent convinced” he will win the Championship again this year.

“I think it is down to what you do on the track. We can all prophesy but it is a question of our focus now being on Abu Dhabi to extract the most out of the car, the drivers, the strategy, and the reliability that we can.

“It is going to be a question of having three perfect weekends.”

Horner said Red Bull would have to be at their best to deny Alonso and his Ferrari team.

“Fernando is a quality driver and Ferrari are a quality team and they are doing a strong job,” he said.

“We have worked hard to get into this position and there is a real determination within the team to carry this momentum into the remaining three races.”

“We need more from the car, more performance,” Horner said. “We have had good speed here, now we need more handling with the car. There are three races to go and I believe we will do it.”