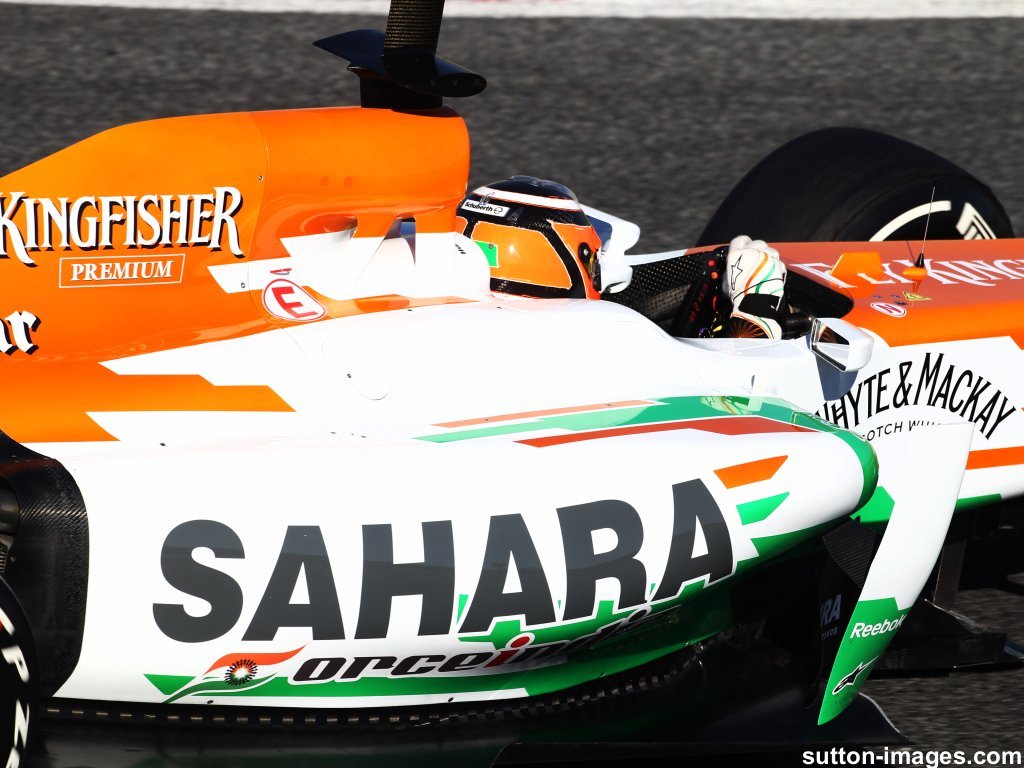 Force India’s Nico Hulkenberg bumped the big boys off the top as he set the pace on day two of the second pre-season test at the Circuit de Catalunya.

The likes of Red Bull, Mercedes, Ferrari and Lotus have so far hogged the top of the timesheets in pre-season testing, but it was the midfield duo of Hulkenberg and Sauber’s Sergio Perez who took the honours in Barcelona on Wednesday.

Hulkenberg, whose running in Jerez a week ago was hampered when reserve driver Jules Bianchi crashed the car on day three, was the first driver to go under 1:22 and his 1:22.648 in the morning session proved to be the benchmark.

Perez soon joined him in the 1:22s and his best effort was just 0.040s shy of that of the Force India driver. The Mexican, though, didn’t have the best of finish to the day as he spent quite a while in the pits with what appeared to be an exhaust problem. Although he made it back onto the track, he didn’t threaten again.

Sebastian Vettel finished P3 with a 1:22.891, but Red Bull will no doubt be quick to point out that both Hulkenberg and Perez posted their best times when they were on super-soft tyres while their man used softs for his fastest lap.

After focusing on “different exhaust layouts” and data collection in the morning, Fernando Alonso was a pretty busy man in the afternoon and his 1:23.180 late in the day bumped him up to fourth.

Daniel Ricciardo didn’t have the most productive day after he twice stopped on the track. He only completed a handful of laps in the afternoon, but his 1:23.639 in the morning was good enough P5.

At the other end of the scale, McLaren’s Lewis Hamilton didn’t really trouble the pace at the front, but he was the busiest man as he completed 120 laps.

Hamilton and Vettel focused on full race simulations runs for most of the day.

It was a day of firsts for Nico Rosberg and Vitaly Petrov as the German drove Mercedes’ W03 for the first time in an official test while Petrov made his debut for Caterham.

Rosberg’s 1:24.555 saw him finish seventh fastest while Petrov was ninth. The Russian made a slow start to the day after struggling with the set-up.

Only 10 teams are in action on Wednesday after Lotus were forced to pull out of the Barcelona test after they discovered a problem with their upgraded chassis on day one.