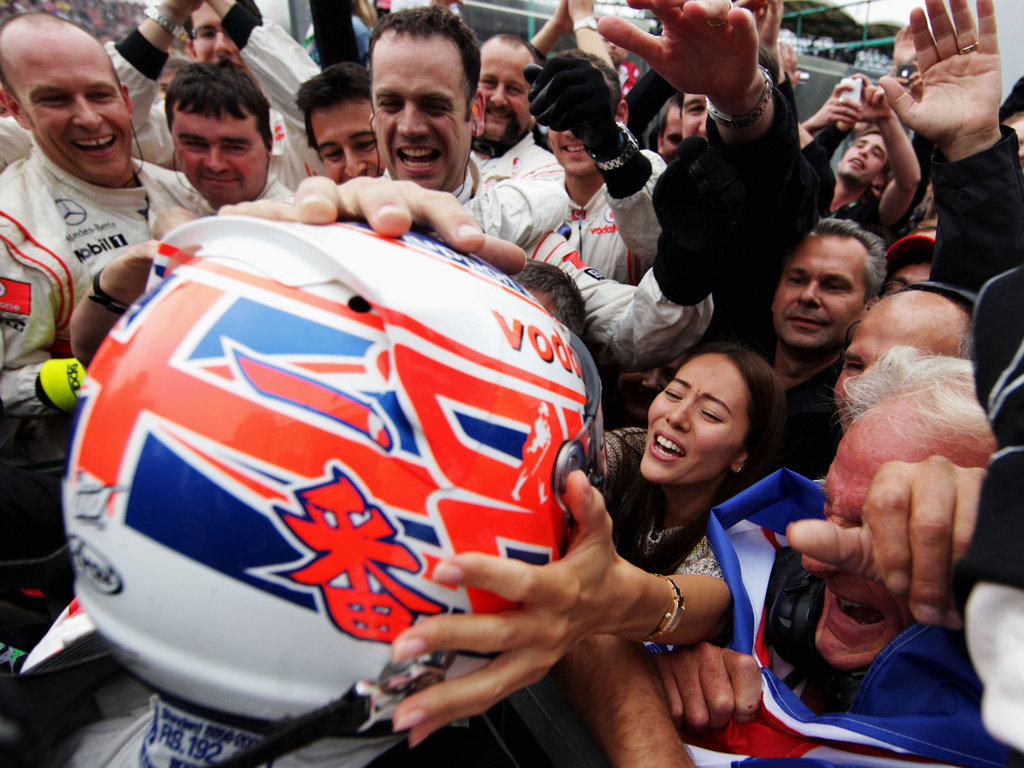 Star of the Race
Jenson Button, McLaren, 1st
While most of the top six had spins and off-track excursions, Jenson limited his misdemeanours to running a bit wide in Turn 2. Most of the tyre stints were characterised by Lewis bolting like a hare and Jenson steadying the gap, then pulling his team-mate back quite rapidly in the closing laps. This was the pattern until we got the rain on Lap 47. In fact even before that Jenson was looking good. After Lewis got a set of Options and Jenson got a set of Primes, Jenson was lapping slightly faster than Lewis and was only six seconds behind him.
Speaking on the BBC forum afterwards Button said he deliberately ignored the call to come in for Inters behind Lewis. If that is the case then he won the race for McLaren. Yet again it was nice to see their two drivers battling it out, something that Felipe Massa doesn’t even bother doing now and which we know Mark Webber will be told off for.

Overtaking Move of the Race
Lap 63, Lewis Hamilton on Mark Webber for P4
A brilliant piece of opportunist overtaking, Lewis was homing in on Mark Webber’s fourth place and used the distraction of the wandering Kobayashi (who drove badly this race) to plant one up the inside of Webber into Turn 12. They were evenly matched on similar tyres and Hamilton made it look easy.

In fact the Hungaroring looked a brilliant race track today with passes made into Turn 1, Turn 2, Turn 5, Turn 12 and even the final turn. Schumi almost had his team-mate into Turn 4 as well. Shades of Nigel Mansell…

Winners
Sebastian Vettel, Red Bull, 2nd
He may have slid wide a few times today, but Sebastian Vettel looked pretty steady at the helm. With the enforced F1 shutdown limiting development over the summer, Ferrari and McLaren are going to have to produce miracles to beat him now. Because with Mercedes and Massa so far off the pace, and Webber likely to defer to him if push-came-to-shove, he can bank on fourth places till the end of the season.

Fernando Alonso, Ferrari, 3rd
Fernando looked vaguely surprised to be on the podium, having been steadily losing the strategy battle all afternoon up until the point when Mark Webber threw the dice and came in for Inters. It’s good for the championship mathematics and imagine what they’ll do when we get a nice warm race that suits their tyres.

Felipe Massa, Ferrari, 6th
Another adventurous afternoon for Felipe. In the last few races he’s been split off from the front battles and found new friends further back in the pack. It was more of the same at the Hungaroring with a bit of rear wing modification thrown in.

Sebastien Buemi, Toro Rosso, 8th
Sebastien’s best GP to date, 8th from 23rd was a great result when there were no Safety Cars. Exactly what he needed in the Toro Rosso musical chairs game of who drives in 2012.

Losers
Mercedes
Given that Nico and Michael were fourth and fifth on the opening lap, the sum total of 9th and a DNF was a poor return from what looked a pretty hopeful start to the afternoon. It could have done with raining a bit more.

Mark Webber, Red Bull, 5th
Another one for the big collection that is ‘Mark Webber’s Crap Starts’. He was lucky that both Ferraris struggled for traction after Turn 1 and held up the field because he might have been passed by both Force Indias if the exit to the turn had been clear.

Then of course there was the typical Webbo charge up the field. His early tyre stops were beautifully judged but, as he admitted after the race, five more minutes of rain and he would have looked prophetic. Instead, it was something that rhymed with prophetic.

Lewis Hamilton, McLaren, 4th
Lewis did so well for most of the race but the tyre call for Inters was what sunk him. There was a bit of post-race ambiguity as to who exactly called for Inters, with McLaren very eager to say it was a “team call” when at the time Ted Tourettes said it was his. How Ted gets to call what tyres Lewis puts on is still a mystery.
This mistake lessened the impact of another stupid penalty from the race stewards who gave Hamilton a drive-through for losing control of the car. More of this below, but with or without it, he’d have still finished behind Alonso.

Nick Heidfeld, Renault, DNF
It’s never nice to consider yourself a flame-grilled whopper, but that’s what Nick Heidfeld felt like as he made a hasty exit from his flaming Renault. No doubt Eric Boullier will accuse Heidfeld of causing it in some way – though you have to say Nick’s had quite a few grand prix starts in his career (183) – and this car-on-fire business has only really started while he’s been driving for the Lotus-sponsored Zippo Firelighter GP team.

The Stewards
Lewis Hamilton was penalised for lots of stuff at the Monaco GP and Alan McNish was the driver steward. So, surprise, surprise, Lewis Hamilton got a penalty for spinning his car in Hungary and guess who the driver steward was…? Yes, it did look a tad dangerous but if Lewis is going to get a drive-through penalty for that, then other GP drivers need to be penalised for similar moves, and we all know that is unlikely to happen.
If you look at the replays, if Lewis had left his car exactly where it ended up after the spin – just slung on the anchors and stopped still – Paul Di Resta would still have had to leave the track to avoid him. The fact is, Lewis put it in first gear and moved forward out of the way of two lapped cars allowing them to go through before spinning it round and causing a third lapped car, Di Resta, to put wheels on the grass.Had he stayed where he was, all three would have had to do something interesting.
There didn’t seem to be anything come up on screen from the stewards about the ‘unsafe release’ of a Renault that looked already on fire as it left its pitbox, or about D’Ambrosio doing a stunt parking turn into his garage, or about the collision between Kobayashi and Alguersuari, but Hamilton’s spin turn got the treatment. So why is that…?

The Jake Humphrey Clothing Appeal
PlanetF1 are launching an appeal to buy Jake Humphrey some better clothes. As for sartorial pointers, well…he’s tall, he comes from Norfolk and he often wears an old three-piece suit jacket. Yes, that’s right, he is the BBC’s answer to Worzel Gummidge. Come the Wednesday before he flies out to the race, he must scan his wardrobe and think to himself, ‘which grey shirt shall I go for this weekend? The tasty deep grey, or the teasing light grey, or maybe just the standard, no risks mid-grey?’