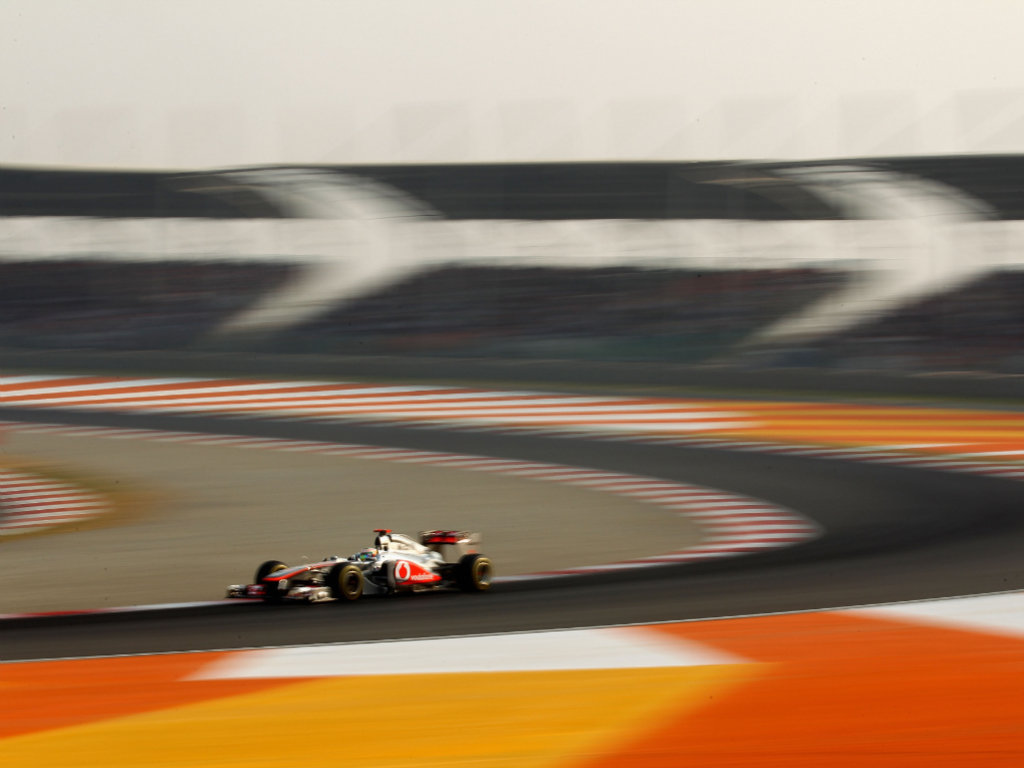 Last year the championship was dead and the Indian GP traded on novelty value.This year the title is live and the DRS is longer…

Last year the championship was dead and the Indian GP traded on novelty value.This year the title is live and the DRS is longer…

While most F1 personnel will look forward to visiting the Buddh International Circuit for the Indian Grand Prix – thanks to the warm welcome from the local fans in Utter Pradesh – the logistical sections of teams aren’t so keen. With the Indian government previously looking to levy tax on earnings from the race, it all looked like getting very complicated last year. There have been more rumblings about tax and things getting held up in customs this year, too.

Which is one of the great comforts of having Bernie at the helm. In a week when (FIA boss) Jean Todt has said he doesn’t want a confrontational approach to the sport, sometimes the iron will of a small individual using short words can get things done – shifty shifty.

What happened last year: The motorsport world was still reeling after the deaths of Dan Wheldon in IndyCar and MotoGP rider Marco Simomcelli. Vettel steamed away from pole, Button slotted into P2 and Alonso and Webber dueled for a podium place followed home by the two Mercs. However the talking point of the race was the accident between Felipe Massa and Lewis Hamilton one of the last in a long series in 2011. This time it was Massa who got the penalty after he hit Hamilton and when he returned to the track he deranged his suspension after hitting a kerb way too hard.

Fast forward a year and we still have a championship battle on our hands with a lot more at stake. Sebastian Vettel took over the lead of the drivers’ championship last time out in Korea and with Lewis Hamilton struggling with a broken anti-roll bar and astroturf aero it’s effectively Vettel vs Alonso vs a distant Kimi Raikkonen faintly hoping that they might take each other out in a couple of races.

Korea wasn’t the greatest of grands prix but what came out afterwards was very interesting indeed. That same evening one of the Ferrari press team (you’d have to think it was Luca Collijani (or George from Seinfeld) who was senior enough to let this kind of thing ‘slip’) briefed the BBC that Vettel was going to Ferrari in 2014.

There had been rumours floating round before, but teams never ever want to confirm or deny something that’s happening two years down the line. What’s the point? Well the point here was very clearly the fact that Red Bull had gained ascendancy in the title race and they were looking at anything possible to unsettle Vettel. And with journos on hand at the end of the Korean GP what better place to do it than there and then.

The idea of Vettel going to Ferrari in 2014 fits in with the Scuderia trying to hire Mark Webber for what could well be his final season. If they knew they couldn’t offer a multi-year contract to a Perez or a DiResta then Webber was the perfect fit. It also gives them the perfect excuse to hang about and sign Felipe Massa for one more year. Which is what they’ve now done.

The side issue is that Alonso always gets the nod on any potential team-mate at Ferrari, so people have figured out that whereas he wouldn’t want Lewis Hamilton in the team competing alongside him, he believes he can measure up against Sebastian Vettel should they have the same equipment. Which they will in 2014.

Right now Fernando Alonso would love to have the same equipment as Vettel but Red Bull are ahead in the qualifying stakes. The race pace of Massa in Korea showed that when it comes to race day, the F2012 can get a lot closer, so we may well have a re-run in India. With such a margin between the points for first and second Fernando can’t settle for finishing behind Sebastian and as the team have said pre-race – they need to go aggressive.

Kimi Raikkonen is still trundling around collecting points, but the longer he goes on hoovering up fifth places, the more cataclysmic the downfall of Alonso and Vettel will have to be.

Apart from the constructor battles – McLaren vs Ferrari vs Lotus – and Mercedes vs Sauber vs Force India, there are drivers who are waiting for miraculous performances to pull their season out of the fire – i.e Senna and Kobayashi. Kamui will have to be on the best of behaviour after taking two cars out at Yeongham, while probationer Romain Grosjean doesn’t have his own personal green flag as yet.

There is no rain predicted for the weekend with sunshine and constant highs of 31C. Pirelli have brought hard and soft tyres which should exercise the strategy computers up and down the pitlane. “The circuit layout is one of the toughest that our tyres will face throughout the second half of the season,” reckoned Pirelli motorsport boss Paul Hembery, “and it’s also the last time that we will see the hard and soft combination this year, which was previously used in Barcelona, Britain and Japan.”

The Buddh circuit at New Delhi, unlike most Tilke-designed tracks (except Austin coming up, which will be fantastic) has got elevation changes – 8% downhill and 10% uphill. It’s not exactly Turkey or Spa, but it does make it challenging for the drivers, and with a longer DRS section this year combined with the tyre gap, the racing should be a step up from 2011.

Things to watch out for:
1. Narain Karthikeyan – will it be his final Indian GP…?
2.Vettel vs Alonso
3.Can Massa translate the confidence of a new 2013 contract into an even better performance than Korea?
4.Will the 2012 bash.log favourites be at it again: Grosjean, Kobayashi, Senna, Perez, Maldonado?
5.Will the heat of the track fire up Lotus’s challenge?
6.Can anyone get to the end of the GP weekend without equating the action on track to a Bangalore Phal (hot) or a Chicken Korma (Monaco).
FH