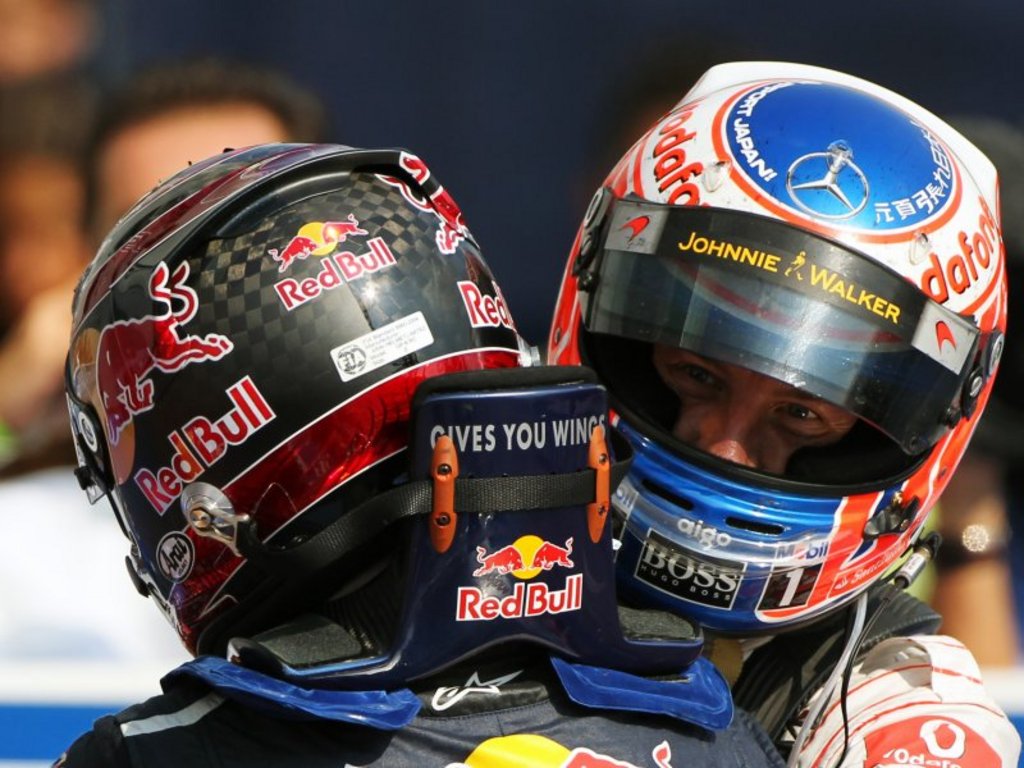 Vettel’s race was a triumph, Button’s was good karma and Michael knew he was in trouble the moment ‘dad’ came on the phone…

Vettel’s race was a triumph, Button’s was good karma and Michael knew he was in trouble the moment ‘dad’ came on the phone…

Star of the Race
Sebastian Vettel, Red Bull, 1st
A great and significant win for Vettel. The word ‘imperious’ is being tossed about a bit freely at the moment in F1 commentaries and I’ve already heard Seb’s Monza win described as ‘imperious’. At the risk of sounding like Stephen Fry on QI, it wasn’t. It might have been imperious if he’d lapped everyone and ‘flicked the vees’ at his rival drivers as he came past – the word means domineering, arrogant, i.e. acting like yer typical emperor. Vettel’s win was emphatic. It also made it two wins in a row at the power circuits of Belgium and Spa, so we should be bale to consign to history the moans from Christian Horner that his Renault engine is underpowered.

Overtaking Move of the Race
Lap 5: Sebastian Vettel, Red Bull on Fernando Alonso, Ferrari
It may very well be the first time this award has gone to Seb in two years but Vettel put a fantastic overtaking move on Fernando Alonso to take P1 after the restart. For a driver who doesn’t do overtaking he seemed considerably at ease putting two wheels on the grass on the way down to the Roggia chicane after Alonso tried his own schameful Schumi move.
Following the race Seb told reporters, with a twinkle in his eye, “I think maybe he didn’t see me.” With the look of man who knew full well that Alonso had seen him. Had that been Lewis Hamilton pushing Seb onto the grass then that would have been an automatic drive-through penalty for forcing a car off the road (as in Hungary).
Had Seb lost control – as he did so spectacularly alongside Jenson Button in Spa, 2010 – then I can’t think that it would have been so easily put aside. But hey, he won, and who wants to spoil the party in Italy…?

Jenson Button, McLaren, 2nd
If you believe in karma then Jenson’s good fortune in Belgium and Italy make up for the disappointments of Silverstone and Nurburgring.
Today he was mighty fortunate to have Mark Webber and Felipe Massa come together in front of him and clear a path. Given the length of Webber’s gear ratios it’s likely that he would have been as troublesome to pass as Michael was for Lewis.
What will please Button most about this race is not the podium, or the points, but the fact that Lewis tried to get past Michael Schumacher for about 20 laps and Jenson cleared him in three corners.
Button also didn’t have to bother with a strategy for overtaking Lewis thanks to Michael suddenly taking a much tighter line round Curva Grande when he saw the yellow helmet on his inside.

Fernando Alonso, Ferrari, 3rd
Another collector’s item for Fernando’s big box of grand prix starts. Alonso really knows how to pull it out on the big occasions, such as the Spanish GP and today’s Italian GP. Massa had a great start, too. McLaren and Red Bull really ought to get hold of one of the 150 handbooks and take it down the photocopying shop…
Alonso’s start set him up for the rest of the race. On sheer pace he was probably looking at a P5 behind both Red Bulls and both McLarens, so to cling on to P3 was a result.
Stefano Domenicali would have been mighty relieved to give the tifosi someone to cheer on the podium. Had Lewis cleared Fernando with two laps to go, then it might not have been such a festive podium.

Lewis Hamilton, McLaren, 4th
Lewis was the model of control both in the race and describing his travails afterwards. To a certain extent he was very much to blame for the position he got himself in. If he hadn’t let Michael Schumacher past him so easily on the restart, on Lap 5, then he wouldn’t have had to work so hard for 20 laps to regain the place. Schumi had both the tow and some KERS available to make it look so so easy.
However Hamilton probably didn’t expect quite the number of blocking moves that Schumi put in, especially in the braking zones. When David Coulthard and Martin Brundle got very excited about Michael’s “two moves!” on Lap 20, it looked like the normal basket of fun you get when following Michael; but the Lap 16 chop onto the inside line around Curva Grande was dreadful because it could have been a big accident. It forced Lewis off the road and lost him a place. Hang on, isn’t there a rule about that…?

Felipe Massa, Ferrari, 6th
Massa was blameless in his collision with Mark Webber and yet again had to spend an afternoon in dogged pursuit. Felipe so nearly took P4 on the opening lap – he was ahead of Michael Schumacher going into the first turn but chose to queue up behind Lewis and lost the place.
Scant reward for a man who’s prepared to give Fernando Alonso a tow-job.

Jaime Alguersuari, Toro Rosso, 7th
Qualifying in P18 brings such rich reward for Jaime, it’s hard to know why he should ever aspire to get into Q2 or Q3.
He had a lot of fun in the race with Perez and DiResta but as Paul gallantly admitted afterwards, the Toro Rosso had too much pace.

Paul Di Resta, Force India, 8th
Paul’s team-mate Adrian Sutil was badly affected by the opening lap melee, but DiResta managed to hold onto 8th on Lap 1 and ultimately took 8th by the flag. Those four points mean that Force India are now in front of Sauber.

Bruno Senna, Renault, 9th
A historic moment – now we have two Sennas who have scored World Championship points… though Ayrton was such a purist and hard case that he probably wouldn’t recognise his nephew as having scored a point because he didn’t come in the top six.