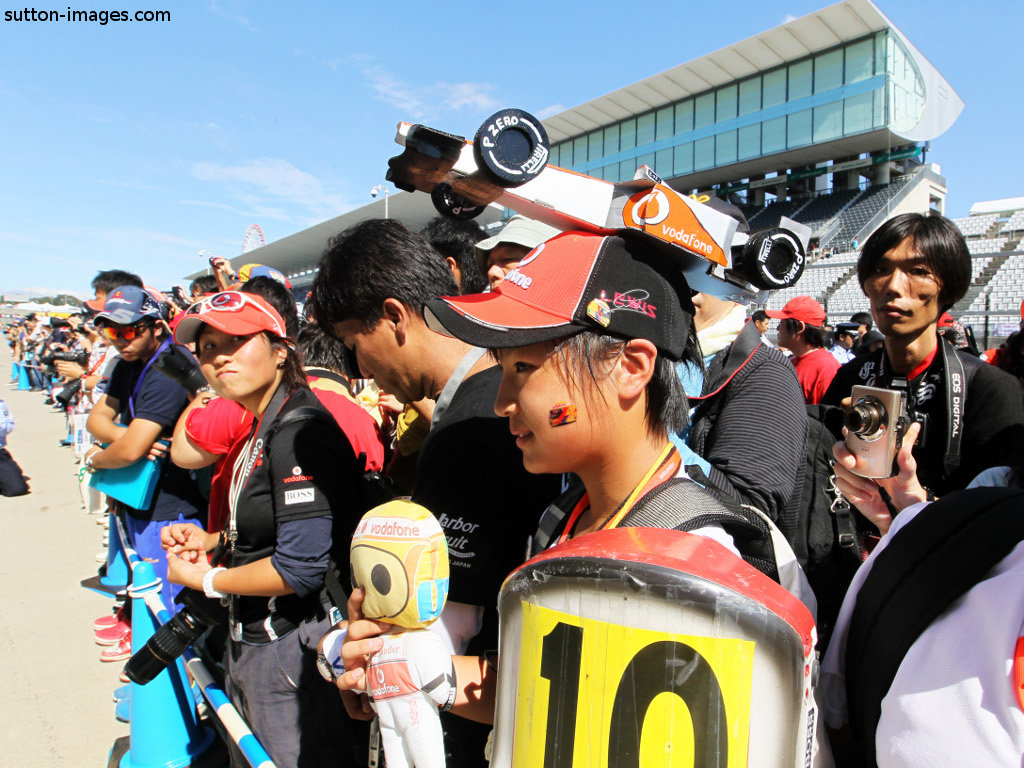 Buckle up. The thrill-ride that is the last six races of the F1 season starts at Suzuka…

Suzuka, as Lewis Hamilton identified in his pre-race quotes, is an old-school F1 track, a narrow strip of tarmac and lacking the finesse of some of the ultra-designed Hermann Tilke efforts. But as most F1 fans will delight in reminding you, along with Spa it’s one of the best. And both are of their time.

Over the years there have been attempts to emasculate both – tarmac run-off at Eau Rouge, extra run-off at Suzuka’s flat out 130R, but both are still permanent fixtures in drivers’ top five circuits

Last year Jenson clinched an emotional victory while Seb took the title that he’d spent the previous races denying would be that easy. This year Jenson is all but out of the hunt and the chances of a repeat Japanese win are reduced after a post-race investigation of his Mclaren gearbox in Singapore proved that the problem which gave Lewis a DNF was about to recur. Jenson will start from P6 or below.

British race fans might be the most hardy and weather tolerant, but the Japanese are the most enthusiastic F1 fans and so drivers like to come to Suzuka for more reasons than just the fast-flowing corners, plus the knife-edge perils of the two Degnas, Spoon and 130R.

The fans have a lot to cheer about in the form of Kamui Kobayashi who is inspired by the home support. Having claimed his first front row starting position at Spa there’s every chance he can get a good points score at his home race. It’d be tempting fate to say more. After his debut home GP the word ‘banzai’ was re-defined as Kobayashi making an overtaking move into the hairpin.

His achievement at qualifying in P2 this year only equalled fellow countryman Takuma Sato, but it’s fair to say that Sato’s was as much to do with the pre-eminence of the works Honda engine at that particular circuit, than anything else. Kobayashi combines speed with an aggression that he’s continuing to refine.

This weekend the title race will have a less sharper focus than all the buzz and consequences of the Hamilton and Perez moves as it pushes Michael Schumacher out into the jobs market or propels him further towards pipe and slippers.

Plus there’s also the major divorce issue of Hamilton and McLaren splitting after a 14-year relationship (McLaren get to keep the trophies). One of the interesting facts revealed by the Mercedes negotiations was that Hamilton didn’t get to keep any of the trophies he won – another, that Mercedes already paid part of his wages.

While Michael and Lewis will face some uncomfortable questions this week, someone who will be slightly less fazed will be Felipe Massa. The narrowing choices of Alonso-acceptable team-mates to replace Felipe are dwindling down to the two Force India drivers. As Frank Cook observed, Felipe’s face is already plastered over Ferrari World in Abu Dhabi, that’s a lot of money the Scuderia can save by not rocking the boat.

We’re expecting a dry race in Japan, and with high-speed circuits lined up for the rest of the year, the form shown at Suzuka could be indicative of the form teams will carry into the breathless six-race dash to Brazil in mid-November. There is a famous fairground at Suzuka and the F1 drivers and teams are just about to get on their own thrill-ride to the flag at Interlagos.