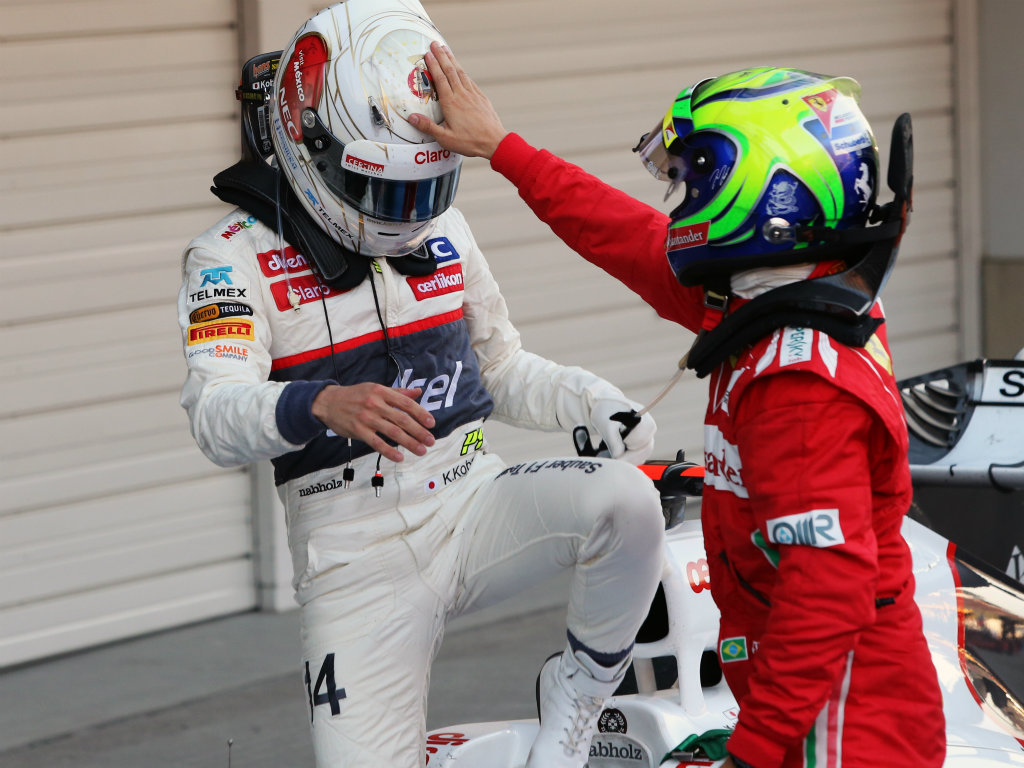 There were some compelling stories from the ‘Suzuka Funland’: Vettel with back-to-back wins, Alonso sidelined, Grosjean in trouble again, Massa rediscovered the podium, but the star of the show was Kamui Kobayashi who is now officially Big In Japan.

Star of the Race
Kamui Kobayashi, Sauber, 3rd
Kobayashi drove an inspired final stint to secure his first ever podium. It might have been even better if he hadn’t been so hesitant behind Daniel Ricciardo early in the second tyre stint, where he lost all the advantage of the opening laps and fresh tyres, allowed Button to close up and Massa to leapfrog him in the pit-stops. He really did’t have much option other than to pit when he did at the end of the second stint (his Sector 1 time on Lap 31 was woeful) and benefitted from the fact that McLaren didn’t react quickly enough to his stop. He also put in a series of fast laps early on in the third stint which gave him the margin at Button’s final pit-stop, four laps later, and drove intelligently to the flag. He had just enough life left in his tyres as he got to the line 0.5 ahead of Jenson who could close but couldn’t get into DRS range.
What needs to happen now is that Japanese sponsors back Kamui and keep him in F1. We’ve had massive institutional investment in the past from Honda, Toyota and Bridgestone, but the kind of finance that has enabled Pastor Maldonado and Perez to show their ability has yet to come out of the World’s third biggest economy.

Overtaking Move of the Race
Lap 42: Bruno Senna, Williams, on Romain Grosjean, Lotus
They may have only been scrapping for 14th place but both drivers had to be careful having trashed front wings in the opening laps. Senna got a great exit from Spoon corner and put his car outside of Grosjean running down to the fearoe and flat-out 130R turn. Grosjean moved right to take the racing line for 130R and found the Williams there. Given that Grosjean isn’t the most predictable driver out there it took a fair degree of nerve for Senna to make the pass.
As for the rest of Bruno’s race – another startline shunt into Rosberg cost him his front wing. He, Grosjean and Maldonado have been the usual suspects this year when it comes to early race returns to the pitlane, but this time it was more a result of the first corner melee. The fact that the stewards didn’t announce the investigation till Lap 12 and didn’t give out the penalty until Lap 21 must have meant there was some area of debate.

Wearing the Mr Stupid hat
After Brazil won the World Cup so many times, they let them keep the trophy. Romain Grosjean has won the Mr Stupid hat so many times this season that he’s got two at home already. His error was not that of an F1 driver – basically he was concentrating so hard on not running wide and taking out a Sauber that he failed to notice the Red Bull in front of him. As Mark Webber said afterwards: “Maybe we have two separate starts, one for him, one for us.” Having been banned for the Monza race after his Spa shunt, it seems inconceivable that in the wake of all those concerns about safety, that he should be allowed to start the next race. The FIA should suspend his superlicence and he should sit out two races this time round.
What makes it worse is that because he can qualify the car high up the grid, the cars he is taking out are involved at the sharp end of the World Championship title battle. We don’t want a drivers’ title decided by whoever Grosjean has missed or hit on the opening lap.

Winners
Sebastian Vettel, Red Bull, 1st
Vettel is doing a brilliant job at scaring his race engineers with unnecessary fastest laps, today on Lap 39, 46 and finally on Lap 52. Vettel’s margin of victory was smaller than it could have been given that he could just stick in a 1:35.774 at the end, his previous fastest being a 1:36.466 six laps earlier.

Felipe Massa, Ferrari, 2nd
Phew. The little fella will be back in 2013 and the new No.2 Ferrari driver won’t have to learn Geordie. Massa’s bad luck in qualifying turned into good luck in the race. With his new tyres automatically three laps younger than Jenson’s and Kamui’s, he could stay out longer in the first stint and while they were struggling with Ricciardo he had free air. It was a great “Re-soolt” for Felipe, he did everything that was required of him. Stefano Domenicali has at least one thing to be cheerful about.

Jenson Button, McLaren, 4th
A good result from eighth on the grid but a major miscalculation from the McLaren team about the timing of the first pit-stop and maybe also the compound of the final stop. Button’s times weren’t falling away that much when he came in on Lap 13 and despite the swiftest of turn-rounds he didn’t make up a place on Kobayashi and they both got stuck behind Ricciardo – which allowed Massa through. Then, when Kobayashi stopped for hard tyres on Lap 31, they could have covered him a lap later with the expectation that they could have turned Button round quicker. When they let him run four laps longer – and could see that Kobayashi was putting in fast times, enough to keep him ahead of Button once he’d stopped – they didn’t give him the soft tyre. They must have been keeping their fingers crossed that Kobayashi would run out of tyres and he didn’t.

Lewis Hamilton, McLaren, 5th
Anything less than podiums is not much good to Lewis now. Given Lewis’s post-qualifying gloom of setting a car up with too much understeer it wasn’t such a bad result, but he never looked like a contender, merely someone who was hanging on.

Kimi Raikkonen, Lotus, 6th
We’ll never know the answer, but it would be interesting to know how much Alonso thought he was the master of his own downfall when he saw replays of the start. From the moment Fernando veered over towards Raikkonen he had nowhere to go but straight on. As Kimi said afterwards, he didn’t change his line. Alonso moved his tyre over and there was an unfortunate touch. Raikkonen has now finished every lap of the 2012 season which is a stark contrast to his team-mate. Part of the reason is that he picks his battles, and although he chose to tough it out with Perez on Lap 3, he wasn’t going to bang tyres with Lewis after the second pit-stops. Generally speaking it’s the guy on the outside who takes a meeting with the barriers.

Nico Hulkenberg, Force India, 7th
Nico was quite emotional on team radio describing the unsettling lack of downforce whenever he got close to Hamilton’s rear wing. Was it an aero thing or was it because he could see his potential new 2013 drive disappearing up the road in front of him?

Pastor Maldonado, Williams, 8th
Pastor scored his first points since Barcelona and kept his bodywork to himself. A joy for everyone.

Luca Montezemolo.
…will be saying ‘I told you so’ about Checo/Checko/Czech-oh/Checkaux/Checho/ after his race ended in gravelly