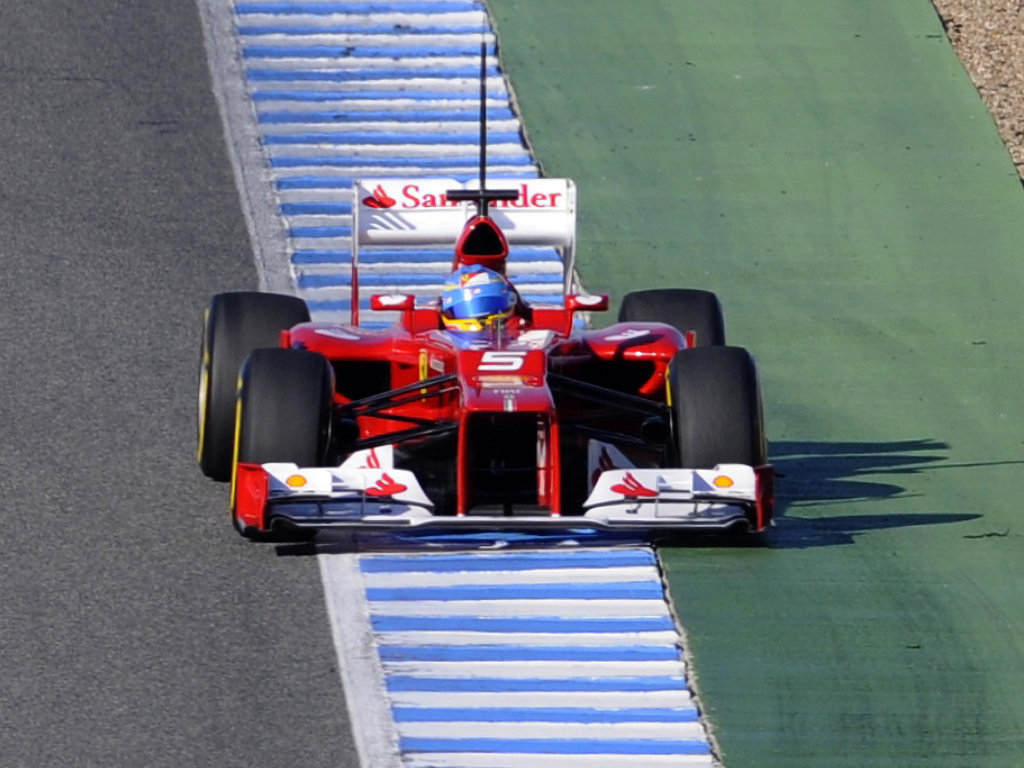 Fernando Alonso silenced growing concerns about Ferrari’s F2012 by finishing the four-day Jerez with the fastest time on the final day.

Following the conclusion of Thursday’s play at the Spanish circuit, Ferrari’s technical director Pat Fry admitted to the world that he was “not happy” with how Ferrari’s pre-season was progressing.

According to Fry, while the reliability of the new car is “good” the pace is only “okay” leaving Ferrari with a lot of work to do before the season gets underway in Australia next month.

However, Fry’s concerns – at least on the surface – came to naught when Alonso broke the 1:20.000 barrier in the first hour of Friday’s running.

The Spaniard went even faster, posting a 1:18.877 during the morning session before heading into the pits prior to lunch with 24 laps under his belt.

For an as yet undisclosed reason, Alonso did just 15 laps in the afternoon – several of which were for practice starts – while his rivals put in the miles. None, though, were able to get close to his P1 time.

Toro Rosso rookie Jean-Eric Vergne came the closest, finishing 0.702s off the pace. However, his time was also set during the morning session.

The fastest man in the afternoon proved to be reigning World Champion Sebastian Vettel.

The German completed just two laps in the morning as “an electrical issue” with his RB8 took several hours to resolve.

As such, he only ventured out mid-way through the afternoon but that did not stop the Red Bull racer from quickly working his way up the timesheets.

Vettel steadily improved from ninth to eighth to fifth and then third, finishing Friday’s running with a 1:19.606, which was 0.729s off the pace.

Lewis Hamilton, who had a trouble-free day with almost 90 laps to his name, was fourth quickest, a further 0.034s slower than Vettel while Romain Grosjean was fifth in his Lotus E20.

Kamui Kobayashi brought his car home in sixth place, just under a second behind Alonso’s P1 time. However, his day was not without problems as the Sauber driver was responsible for one of four red flags when his C31 came to a halt due to a hydraulic problem.

A solid day for Force India’s Nico Hulkenberg, who lost valuable track-time on Thursday after Jules Bianchi crashed his car, finished with the German eighth quickest with 90 laps.

Meanwhile, Bruno Senna, who was the busiest driver on the final day, put in some consistent runs as he covered a marathon 125 laps. The Williams’s racer, though, brought out the red flags on two occasions.

The first was in the morning when, after 97 laps, he stopped out on track while the second, late in the afternoon, came at Turn Two. The day’s first red flag stoppage was in order to allow a marshal to clear a piece of debris off the track.

Jarno Trulli completed the timesheets for Caterham with 117 laps and 3.321s off the pace.