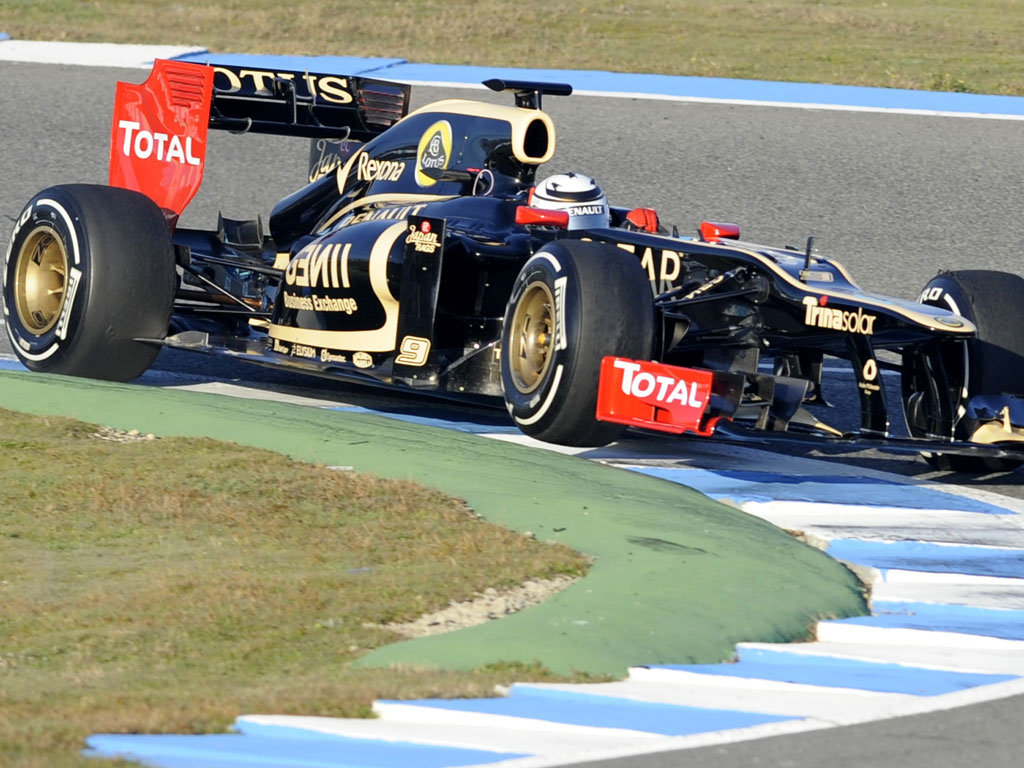 Kimi Raikkonen’s first official day back in Formula One ended in glory as the Lotus driver claimed the P1 slot as pre-season testing got underway.

Behind the wheel of his new Lotus E20 and permitted to go higher than second gear – Raikkonen had put the car through a shakedown a day earlier where he could go into second gear due to filming commitments – the Iceman quickly shook off any lingering rust.

Raikkonen moved to the top of the timesheets early on before lowering the benchmark to a 1:19.670 midway through the morning session.

That time proved to be unbeatable as Tuesday’s running progressed, ensuring the 32-year-old started his comeback in the rather familiar position of P1.

“Lap times may mean little at this stage, but it’s still great to see Kimi at the top,” Tweeted his Lotus team.

Paul di Resta, in action for Force India with their new VJM05, was second quickest as his morning time, as well as that of Mercedes GP’s Nico Rosberg, was untouchable.

The first change from the morning to the afternoon’s order was with Mark Webber. The Aussei clocked a 1:21.474 prior to lunch having only completed eight laps after Red Bull were forced to wait for parts for their new RB8.

But once underway properly in the afternoon, Webber worked his way down to a 1:20.496, putting in another 46 laps.

Toro Rosso’s Daniel Ricciardo was next in line even though his day was cut short due to an oil pressure problem in the afternoon which resulted in the first red flag of the day.

“Daniel felt confident in the car and we ran trouble free until we lost some oil pressure, at which point the engine protector did its job and stopped the car,” explained team boss Franz Tost.

“We are now investigating this loss of oil pressure, but we are confident we can have another good day tomorrow. As the failure happened at four o’clock, we only lost one hour’s track time which we expect to make up for tomorrow.

“The car looks nice but the important thing is that it should be fast. My first impression, having enjoyed the rare experience of going out onto the track to watch it in action through some corners this morning, is that the basis of the car is quite good and healthy.”

The only other red flag of the day belonged to Kamui Kobayashi, who was seventh quickest behind Michael Schumacher. The Japanese driver came to a halt out on track 30 minutes before the close of play. But with 104 laps under his belt, Sauber won’t be too concerned.

Jenson Button and Felipe Massa, both of whom had quiet days in their new cars, were eighth and ninth quickest ahead of Caterham’s Heikki Kovalainen.

Kovalainen’s running, though, was cut short when a damaged starter shaft brought his day to its conclusion an hour before schedule.

“Testing finished for the day unfortunately,” Tweeted Mike Gascoyne. “No problem with the car but a damaged starter shaft means we can’t start it.”

But despite that minor issue, Kovalainen was happy to be back in action. “We were first out on track this morning and the early feeling I had from the car was good. It’s far too early to tell how much we’ve progressed but it already feels like we’re going in the right direction.

“We obviously didn’t want to end early today but we couldn’t sort out the starter shaft issue in time to get back on track, but I’m reasonably pleased with what we have achieved today and I know the team will put in the work tonight to get us back out on track tomorrow and pick up where we left off today.”

Williams was the only other team in action with their new car as Pastor Maldonado put the newly-launched Renault-powered FW34 through its paces.

“The car felt good and the systems were all working well this morning,” he said.

“I like the feel of the new Renault engine as well. It’s still too early to make any predictions, but we are pushing hard and working to understand the car better.”