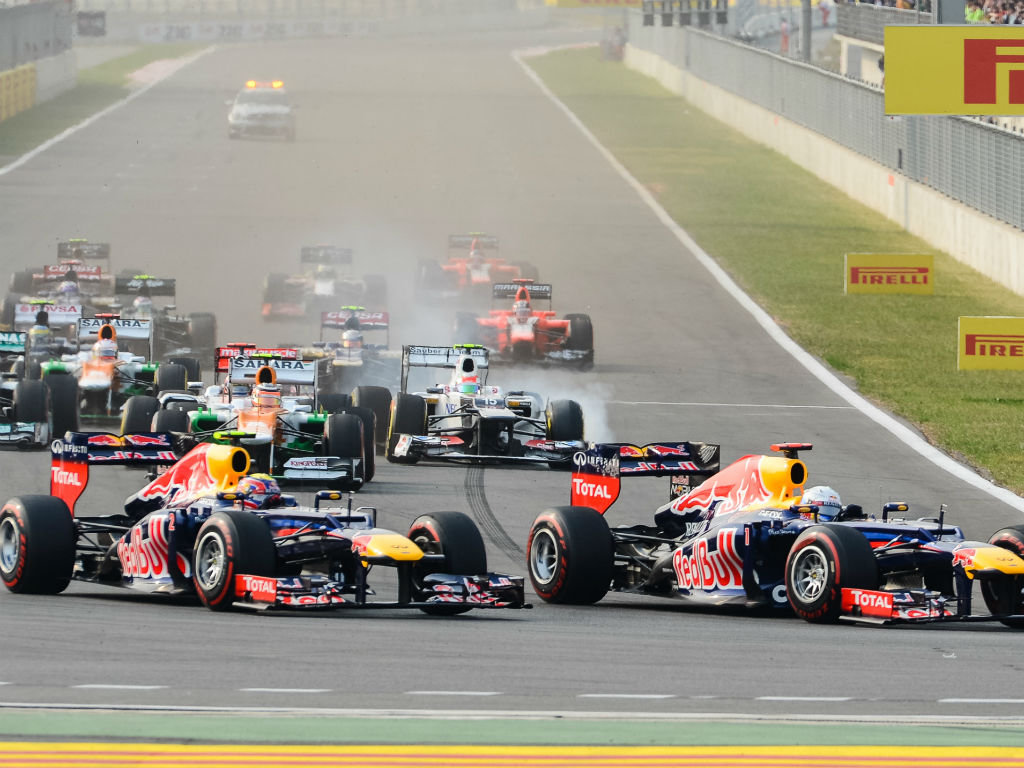 Gangnam Style rapper Psy was on hand to wave the chequered flag, but it was Kobayashi who was the two-hit wonder…

Gangnam Style rapper Psy was on hand to wave the chequered flag, but it was Kamui Kobayashi who was the two-hit wonder…

Star of the Race
Felipe Massa, Ferrari, 4th
Felipe’s drive of the season and one where he could – had it been Race 1 on the calendar – have finished second. He was obviously a lot quicker than both Alonso and Webber in the final stint but wasn’t allowed to show it. Even when he was told to back off “to a two or three seconds behind” by his engineer Rob Smedley (the transmission came across on Lap 39) he found it difficult. On Lap 42 he was even closer at 1.2 seconds back. Given the clear of advantage of the DRS and the sheer grunt of the Ferrari engine (look how well Toro Rosso did on the long straight) the F2012 in the hands of Massa could have separated the Red Bulls.
Felipe can’t be too disheartened that he wasn’t unleashed because his biggest supporter was in the car in front.

The Big ‘What If…’
So what would have happened if Alonso had let Massa through in the final stint to see if he could challenge Mark Webber? The strategy being that if Felipe could challenge the Red Bull and put Mark under more pressure, then Webber’s tyres might not have lasted the distance. Or, we could have had a scenario as we witnessed with Hulkenberg, Grosjean and Hamilton where Massa fighting with Webber allowed the car behind, Alonso, to pass them both.
It’s not as though Massa would have failed to give up the place to Alonso once past him and they were fifteen seconds down the road in front of Kimi Raikkonen. It was the perfect situation to try something radical.

Overtaking Move of the Race
Lap 40: Nico Hulkenberg, Force India on Romain Grosjean, Lotus and Lewis Hamilton, McLaren
On Lap 40 Nico Hulkenberg was a long way short of the Grosjean vs Hamilton battle that unfolded at Turn 3 – a place where Grosjean was understandably very tentative all day. As Grosjean ran wide and recovered to the track Lewis watched his every move, closing down the inside line to Turn 4…and allowing Hulkenberg to go right round the outside. When Lewis let his McLaren drift out there – as he’d done successfully against Raikkonen, Hulkenberg decided not to back off, took to the kerbs and left enough of his Force India there to wedge himself up the inside for Turn 5. Overtaking two cars in one corner is always a joyful feat to watch but when one of those cars has spent the entire race trying to get past you… it’s joy and a half.

Wearing The Mr Stupid Hat
Kamui Kobayashi, Sauber, DNF
It wasn’t Gangnam syle, more like bang-bang style. There were no loud chants of “Kamui!” coming from the grandstands this week – just one half of the McLaren garage and one half of the Mercedes garage. The fact that Mexican telecoms firm Telmex will continue their sponsorship of the Sauber team next year despite Sergio’s departure means that reserve driver Estban Gutierrez – from Monterrey, Mexico – is almost certainly going to get a race seat. Will they really keep Kamui over someone like Nico Hulkenberg?

Winners
Sebastian Vettel, Red Bull, 1stWith just 200 metres to the first corner it was a good start from Sebastian to be leading by the time he got there – and metaphorically, he didn’t look back. It’s obviously going to be less pressure when you have a team-mate in between you and your closest rival, and one you know will be managing his pace to stay exactly where he is.

Mark Webber, Red Bull, 2nd
Too little clutch at the start in Suzuka, two much clutch a week later and Vettel escaped again. Something odd happened to Mark’s car between laps 20 and 24 because the gap to Alonso came down from 3.0 to 2.6 to 2.3 to 1.6 to 1.3 – stayed around that interval and then moved out again. Another race of tyre management which won’t have pleased him at all.

Fernando Alonso, Ferrari, 3rd
Even before Lewis’s car got the jitters Ferrari looked the second quickest out there, which will have been a relief to Alonso. Instead of damage limitation there was almost the chance to attack. His start was great, taking advantage of Hamilton who ran wide at Turn 1, getting his nose firmly inside by Turn 2 and braking expertly into Turn 3 while Lewis had to fend off Felipe and Kimi. His mid-race pace came and went with the tyres which were far more of a lottery than anyone, even Pirelli, expected.

Kimi Raikkonen, Lotus, 5th
You can see why Raikkonen has finished every lap this year – given the chance of a 50/50 with any of the alpha males on the grid he backs off. There were a couple of instances in the race where he could have toughed it out with Hamilton and he decided to ease off. Could it be that meetings with trees during his time spent in the forest has made him an altogether more cautious driver or is this a trait that comes with old age – and being a little bit disappointed?

Nico Hulkenberg, Force India, 6th
Hulkenberg’s best race (apart from qualifying on pole in Brazil) and one where he kept a faster car (Grosjean) behind. The fact that Grosjean could not afford any kind of contact obviously worked to his advantage, but it was a strong performance, worthy of a Sauber drive.

Romain Grosjean, Lotus, 7th
Grosjean did what he had to do – finish the race without incident or accident. His caution only cost him one place in the end.

Toro Rossos, 8th and 9th
At last, Daniel and Jev got to show that they can race. Ricciardo made up his entire gearbox penalty on the opening lap and Jev made some neat passing moves. Dr Helmut will be encouraged.