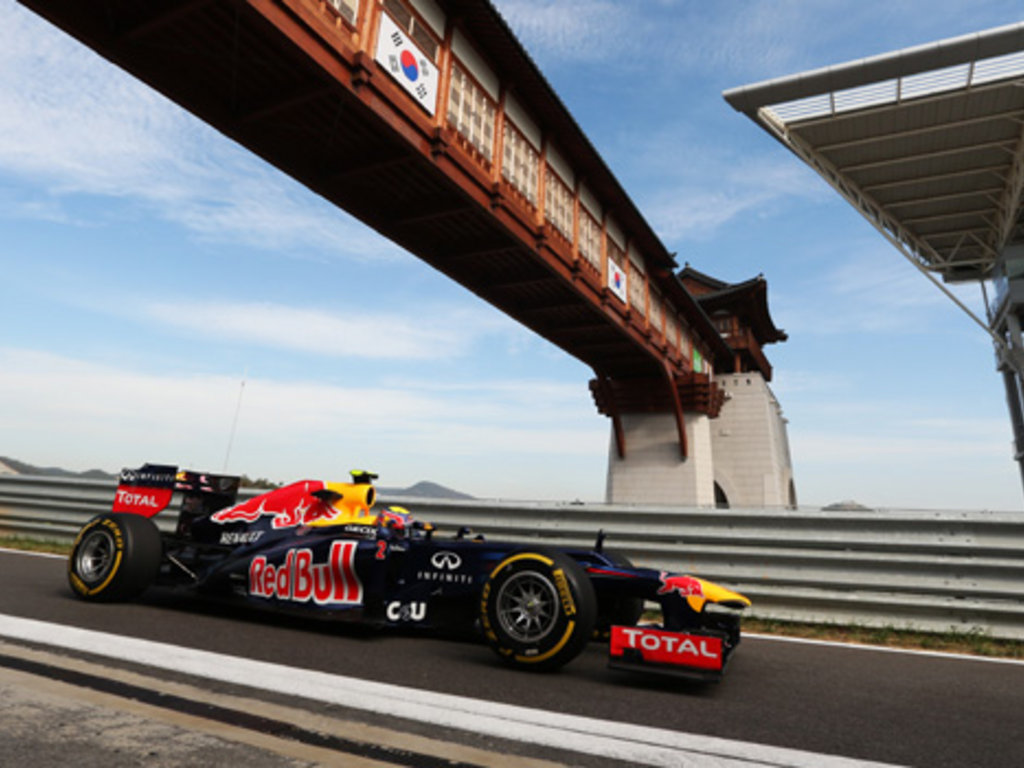 It’s the grand prix that feels like an MG Owner’s Club race weekend. The Korean GP has very few spectators, while team members know everyone in the paddock. The atmosphere is like Mallory Park (with the buildings of an industrial park) because the paddock in Korea is made up almost entirely of the regular F1 circus. There are few celebs and corporate guests who make it out to the far flung Yeongam, which is scandalously little used. There is a whole separate pit complex for the support races and in 2013 there will be one support race.
It’s fair to say that South Korea hasn’t embraced F1 and this could very well be the last GP for a while. The contract is up for negotiation and organisers have been given a provisional spring date for 2014 on the F1 calendar, which is like being handed a grenade with the pin out. India is skipping its race in 2014 because it wants to move the grand prix from autumn to spring and couldn’t sell tickets for a 2014 event that would have been only 6-7 months after the last GP. And they have some spectators in the first place – imagine how few would turn up in Korea if it goes ahead next spring.
The circuit is still quite new and very green, and there is a high degree of evolution over a race weekend which throws one variable into the mix as grip steadily increases. There can also be quite a range of temperatures, which is another variable that engineers have to allow for, and lastly the track is a mixture of high-speed thrash (Sector 1) followed by some medium and low-speed corners with the end of the lap emulating a street circuit. So teams have to make a number of compromises between low-drag set-up and the high downforce needed to finish the lap off.
Part of the set-up will involve making sure that the car’s gear ratios are correct – quite a few times this year we’ve seen cars unable to use the DRS properly because their engines are up against the rev limiter on the straights and they can’t get past the Toro Rosso in front. Teams have to set their gear ratios on Friday and on Friday the track won’t be anything like it is on Sunday afternoon.
It would be nice to think all this uncertainty and guestimation might turn up an unfamiliar winner of the race, someone who doesn’t celebrate with the use of their index finger, but it’s unlikely. Apart from winning the last two races in Yeongam, Vettel has led all but 12 laps in the history of the Korean Grand Prix, that’s a staggering 93%.
When it comes to tyres, it’s the same selection as we had in Singapore, the Mediums and the SuperSofts, but the Mediums are likely to be put to more use this time round. “We would expect there to be a significant difference in lap time between the two compounds we have selected as was the case in Singapore,” predicts Pirelli’s Paul Hembery (at last with a 2014 FIA contract tucked firmly in his pocket). “That should help the teams to put together some interesting strategies.”

“Korea has the highest lateral energy demand of all the circuits where the SuperSoft is used, so tyre management is going to be important once more. In particular, the work done in free practice when it comes to assessing the wear and degradation levels on each compound with different fuel loads is going to be especially important. Although there is a lower probability of a safety car [than Singapore] in Korea, this is still something that the teams will be paying a lot of attention to.”
So Lotus may still have the opportunity to run longer and break what has been a three-team stranglehold on podium positions. Only Red Bull, McLaren and Ferrari have scored podiums in Korea. Both Lotus and Mercedes could gatecrash the party at Yeongam.
On the subject of Safety Cars, it’s been deployed in two of the three Korean Grands Prix so far (2010 and 2011) and there have been a total of six deployments over two races. In fact the Safety Car running in 2010 meant that the race was almost dark by the time it finished. In Singapore, the timing of the Safety Car caught Mercedes out, and it’ll be interesting to see if the team – who brought neither car in last time – will split their strategy this time round should it happen.
With Lotus dropping back it is now a two-horse race for second place in the Constructors’ Championship between Mercedes and Ferrari and whereas Ferrari have performed above their car in the last two races, Mercedes have underperformed.
Korea is one of the few anti-clockwise tracks and there is just something about anti-clockwise that Felipe Massa likes – Brazil, apart from being his home race, is anti-clockwise and he wins there – Turkey, his first GP win, is anti-clockwise – Austin, where he outqualified Fernando Alonso last year, is anti-clockwise. Last race he said he was out for himself, not the team, but after Fernando’s stunning start he was not obliged to put that statement to the test. We could find out the true situation in Korea.
Alonso’s taxi ride home at Marina Bay was Mark Webber and after starting last year from pole, Webbo knows that whatever he does, he’s going to be starting from ten places further back thanks to his totting up grid penalty. Not surprisingly for someone who’s taken pole before he likes the layout. “The atmosphere at the track isn’t great because there aren’t many spectators, but the track’s got some challenging sections and some good corners. The last sector in particular is fun because it has a nice flow to it and the walls are pretty close, so you have to be very accurate with your line. Something that’s unique about this race is that the drivers all stay in the same hotel. Meal times can be a bit bizarre because everyone sits by nationality and we like to have a good look at what everyone else is eating for breakfast.”
Presumably it’s only Kimi who has the full Korean.
Andrew Davies