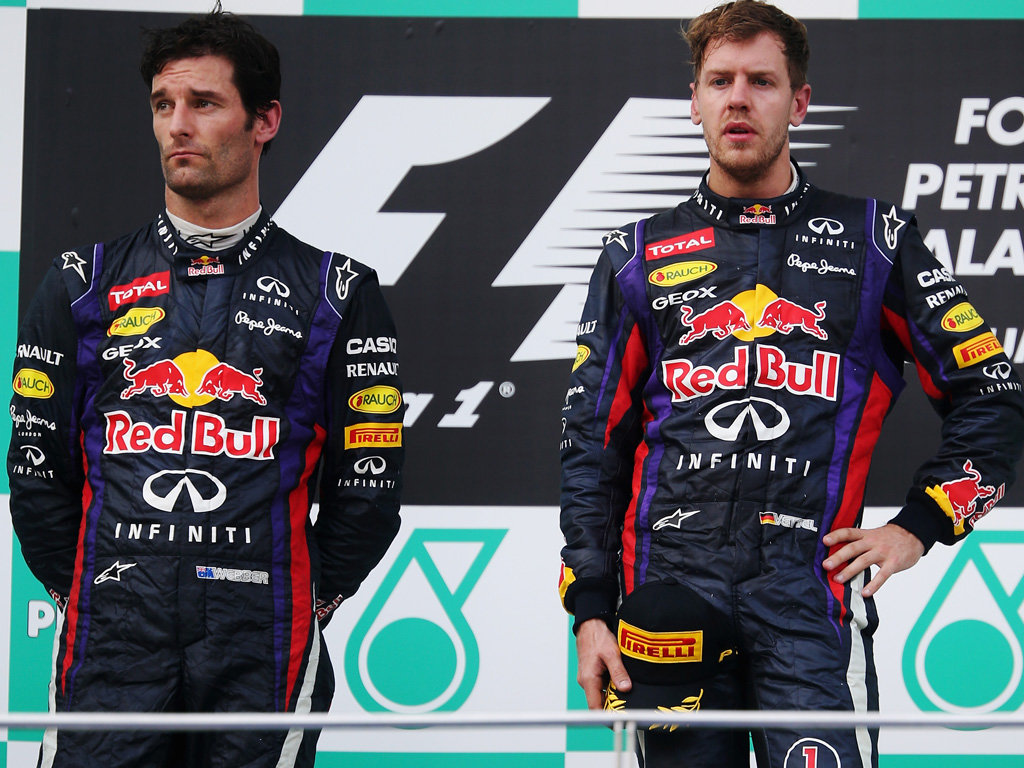 As expected, every man and his dog – unfortunately not Roscoe – has an opinion on the Red Bull shenanigans at the Malaysian Grand Prix…

As expected, every man and his dog – unfortunately not Roscoe – has an opinion on the Red Bull shenanigans at the Malaysian Grand Prix.

Sebastian Vettel infamously “robbed” team-mate Mark Webber of the race victory at Sepang on Sunday after he ignored calls from his team principal Christian Horner not to overtake the Australian.

Webber was furious after the grand prix as he was told to switch off his engine and assured that Vettel would not attack him. Naturally the post-race interviews turned into fun and games with Webber criticising the German and Vettel in turn apologising.

The 36-year-old F1 veteran has admitted he needs time to lick his wounds while Red Bull have revealed they will hold further talks with Vettel.

Of course everyone involved in Formula One has something to say about the saga and Mercedes driver Lewis Hamilton, who was also very sheepish after the race as he was handed third place on a plate with his team ordering Nico Rosberg not to overtake him, believes Red Bull’s number one and number two driver policy is to blame for the drama.

“Red Bull have a clear one and two, they always have. And that is why they have always had the problems they have had,” he is quoted as saying in The Guardian.

“We don’t have a one and two at Mercedes. I have always said, from the moment I was speaking to the team, that I wanted equality [with Rosberg].

“They didn’t offer me to be favoured but I just wanted to make the point that I am not a driver that comes and requests that like a lot of other drivers do.

Meanwhile, Formula One supremo Bernie Ecclestone feels the sport should not have team orders with the season only two races old.

He told Telegraph Sport: “At this stage of the Championship, I do not believe there should be any team orders. It does not matter who it is.”

He added: “Let’s assume that these two guys are in a position to win the Championship at the end of the year, then there is no way that Mark is going to help Sebastian.

“So Sebastian has to think about that. Maybe there will be a stage when he would like Mark to help him, but I don’t think Mark is going to come up front and do it.”

“I used to regard him as the most intelligent and worldly 25-year-old I have ever seen racing,” he told The Independent. “But not any more. I think he made a major mistake, and I really cannot understand what was going on in his head. He made a very serious error of judgement over what was right and what was wrong.”

Another former F1 driver Gerhard Berger warns that sometimes you have to be “extremely selfish” to win World Championships.

“These boys have such a big killing instinct. In these moments they are stressed by the situation, they just cannot follow their brain, they just do what their instincts are telling them.

“So, of course, after the race he is saying he is very sorry about it and that he cannot sleep, [but] I think he sleeps very well because this is his nature. But on the other side, this is part of his success. And nobody, no team, no team chief, no team-mate, nobody is going to change it.”