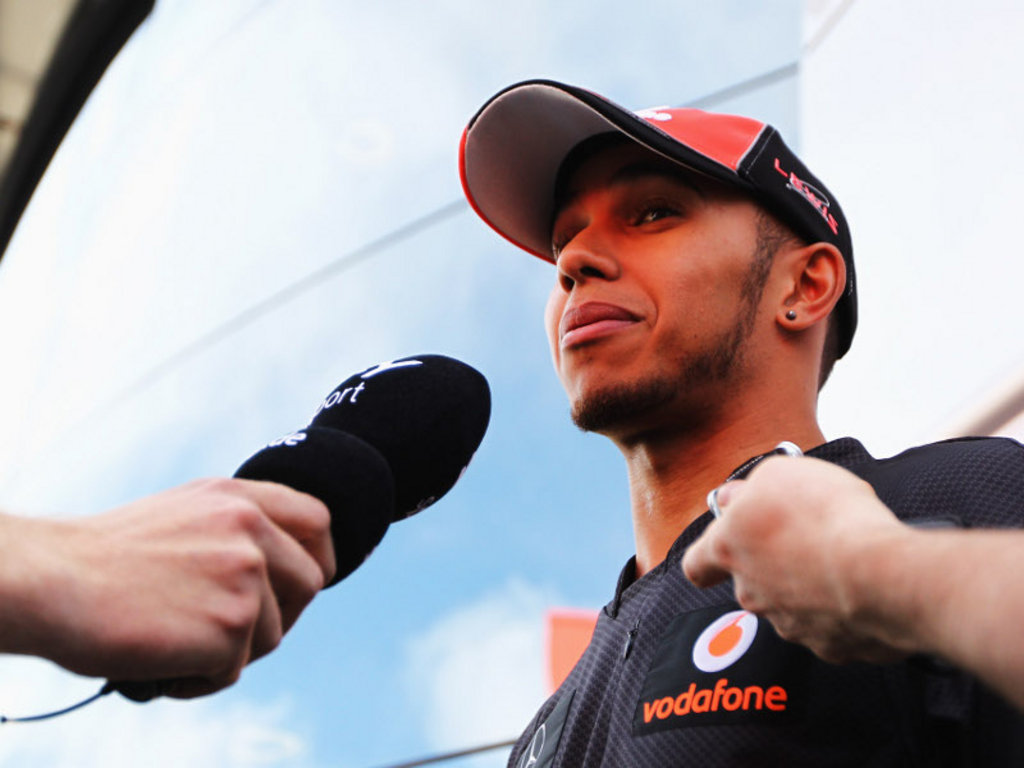 Lewis Hamilton took another step towards repairing his image in the eyes of the Spanish public by appearing on one of the nation’s most popular talk shows.

Such a scenario would not have occurred a few years ago when Hamilton was a despised figure in Spain following an acrimonious fall-out with home hero Fernando Alonso during their time together at McLaren in 2007.

The backlash was felt in 2008 as Hamilton suffered racist abuse during a test session at the Circuit de Catalunya in Barcelona, which forced the FIA to launch their EveryRace campaign.

Then on the eve of the final race of that season in Brazil, with Hamilton on the brink of winning his maiden World title, a mindless website that carried hundreds of abusive messages had to be pulled from the internet.

The intervening years have been a little kinder for Hamilton when he appears in Spain, with Wednesday night’s showing on ‘Buenafuente’ – a show similar in style to Graham Norton – doing his cause no harm.

De la Rosa, who won a Scalextric race involving the trio and presenter Andreu Buenafuente, at one stage vouched for the Briton when he said: “Lewis is a much better person than you all think.”

Explaining his appearance, Hamilton said: “The talk show was nothing spectacular.

“But we were treated well and it was quite a positive to be seen on a Spanish TV show, one of the most popular here.

“It was good to be on there with Pedro and Jenson, and hopefully it came off well.

“I would also hope it has improved my image with the Spanish people because it has been a constant uphill struggle.

“But every year I get more people, more fans coming up to me, and I notice more cheers. There is more positivity and less negativity.

“I’m hoping the negative days are behind me, and that in five or so years’ time I’ll have a massive crowd of love here. That’s my goal.”

On the day Alonso announced the signing of an extension to his deal with Ferrari through to 2016, that would appear to have scuppered any hope Hamilton had of driving for the Maranello marque himself in the foreseeable future.

As Hamilton points out, there is little chance of them teaming up again, adding: “Generally we’ll always be opponents at different teams.

“I don’t have a problem with being alongside him, but I assume he wouldn’t allow it to be the other way around, not that generally I’ve really wanted that.”

Suggested to Hamilton he would have to wait for Alonso to leave Ferrari to be given a chance with the team, he replied: “Not really.

“If you look at what happened to Kimi (Raikkonen) for example. It doesn’t mean you can’t get rid of a driver just because you’re under contract.”

Appreciably, Hamilton has again reiterated he is happy where he is at McLaren.

“You try to put yourself in good environments and with good people, which works for him, and it works for me,” said Hamilton.

“I have to analyse and make sure that wherever I am – and obviously where I am right now – works perfectly well for me, so I don’t see any reason to change.”

For his part, Button was happy with his talk show experience, although conceded it did have its awkward moments given the language barrier.

“It was a little bit tricky because you would say something and think it was really funny, and nobody would laugh for 10 seconds, and then everybody would laugh,” said Button.

“So you’d say something, and then you’re thinking ‘Right, I’m going to have to wait for people to laugh now. Please laugh’, and you’re just sat there praying. But they did laugh, which was nice.

“There was also a bit of a delay because of the translation. It was all done on an earpiece, so it was a bit tricky, but it was good, all fun.

“It was good to be on a TV show here, and it’s pretty big as well. A lot of cool people have been on that show.”