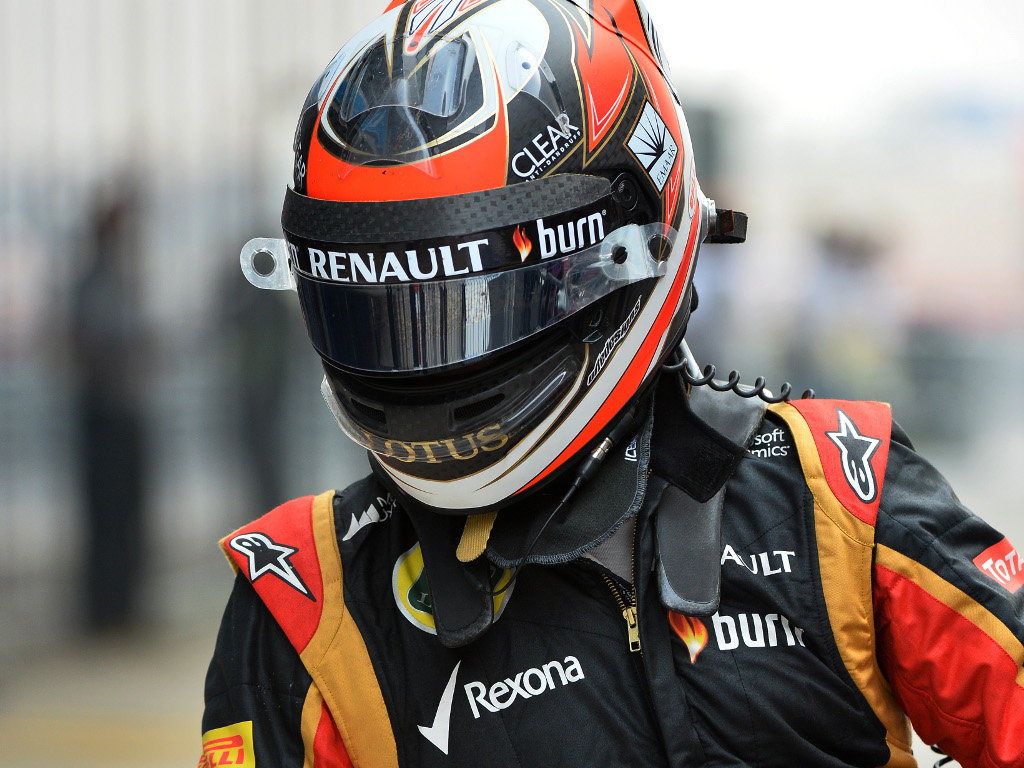 Kimi Raikkonen is hoping for a repeat his 2012 success at Abu Dhabi this weekend while Romain Grosjean wants to make it four podium finishes in a row.

Q. How’s the feeling heading back to the scene of your 2012 race victory?
KR: “You just approach it like any race. I had a good result there last year, but I had a very boring race there the first time I visited in 2009. I’d prefer to have another good result, but you don’t know how strong you’ll be until you get to the circuit.”

Q. What do you think of the Yas Marina?
KR: “It’s a great place to go. The circuit is connected to big entertainment centre and you’ve got all the boats moored next to the circuit. There are often a lot of passionate fans watching the race and for me the hotel is walking distance from the track which I like. It’s also good to race at a circuit where you have had a strong result before.”

Q. Anything else in Abu Dhabi that’s good for you?
KR: “I like to be on a familiar time zone so you can wake up normally and do everything in the expected order. That’s one of nice things with this race; especially with it starting so late.”

Q. What do you think of the circuit itself?
KR: “The facilities are second to none. The track layout makes it really challenging for overtaking as there are not too many places to pass. You really have to qualify well to be at the front and get a strong result from there. There are many corners, you need good overall downforce and grip, plus the car has to ride the kerbs very well too. It’s a track where you really hope to get everything nicely together during the whole weekend. When you succeed with that, it’s a good place to race. I have had one very boring race being stuck in the middle group and then one great race fighting for the victory at the top. I know which I prefer.”

Q. Your race in 2009 wasn’t one of your favourites then?
KR: “That was a boring one I can tell you! I finished back in twelfth position and there was nothing I could do about it. Those sorts of races are not the best.”

Q. How did it feel to take your 19th win in Abu Dhabi last year?
KR: “I was very happy for the team; myself also obviously, but mainly for the all the crew and everyone at Enstone. It was a hard season so the win was well deserved for everyone and just what we needed. It was something great for all the fans who have continued to support me and the team too. For me, it was just another win on the list. It’s great of course because it had been a few years, but the wins before were very similar; we didn’t have the best car, but we fought hard and still won.”

Q. How does the evening race timing influence the race?
KR: “An evening race means I can get up later! Having a mixture of day and night makes a different challenge from circuits that we see anywhere else. We start with the sun and finish with the lights. It’s different, interesting and spectacular for the fans to watch too.”

Q. You’ve had some great races where you’ve moved up the order superbly; what’s the key to overtaking in Formula 1?
KR: “You cannot plan it beforehand. Often an occasion comes suddenly and you have to jump on it immediately. Sometimes you get it right, sometimes not. More often nowadays you have to sit for quite a while behind somebody to work out where you can do it. Sometimes you just have to wait to see if the guy in front makes a mistake or if his tyres are finished quicker than yours; that’s when you do it.”

Q. How was your Indian Grand Prix?
KR: “We tried something different with a one stop strategy and it didn’t work, but we didn’t lose anything by making a late second stop over running the normal two stop strategy. I had a brake problem for all of the race where they were overheating, and this got worse in traffic so I couldn’t overtake.”

Q. What’s your target for Abu Dhabi?
KR: “A race like last year would be good, rather than the one I had there in 2009.”

Q. What do you think of the Yas Marina circuit?
RG: “It’s an amazing facility and it looks so impressive. It’s not used as much as some circuits over the course of the year so we know we’re going to get lower grip at the start of the weekend. For me, the layout is not my favourite – there are too many second gear corners for my liking – but not every circuit can be your favourite and the E21 certainly seems to be liking every track at the moment!”

Q. What types of memories do you have of Abu Dhabi?
RG: “My history in Abu Dhabi isn’t bad. Last year wasn’t the best weekend for me, as I qualified tenth and did not finish the race. It was however a great race for the team, so we know what is possible. I’ve been on pole position in the GP2 Asia Series and finished second in that race, then won a GT1 racing World Championship round there. My comeback to Formula 1 was also during an Abu Dhabi Grand Prix practice session in 2011, so I’ve got some good memories of the place. It would be nice to have some more…”

Q. The Indian Grand Prix was quite some drive for you from 17th on the grid to the podium?
RG: “If you had told me after qualifying that I’d be on the podium in India I would have said you were crazy! At the start of the race our prediction was fourth place at best if we could make a strong start and have a perfect race from there, so it was an amazing result and a great performance from the team. A friend of mine in the media said he would eat his hat if I made a one-stop strategy work, so I’m looking forward to seeing that.”

Q. With a different outcome on Saturday, would the win have been achievable?
RG: “If we’d started further up the grid then a fight for second would definitely have been possible, but Sebastian [Vettel] was just too quick. Congratulations to him; he’s a nice guy, a great driver, and I hope to be challenging him for that World Championship in the future…”

Q. Does the schedule of a late race affect you?
RG: “I quite like it as it means you can get more sleep and I like to sleep! The logistics of the race are pretty good as you stay right next to the circuit and the facilities are amazing. On the Friday you don’t start the first practice until the afternoon, then qualifying and the race itself start pretty late in the afternoon too so it’s different from a lot of races we do. Everything seems to work well like this, but in reality when you’re in the car you’re not thinking about the time of day; you’re thinking about the lap time!”

Q. What about the heat?
RG: “It’s certainly a contrast to the weather in Europe at the moment! The cockpit of a Formula 1 car can be a pretty hot place even when it’s cold outside, but certainly Abu Dhabi is one of the hotter