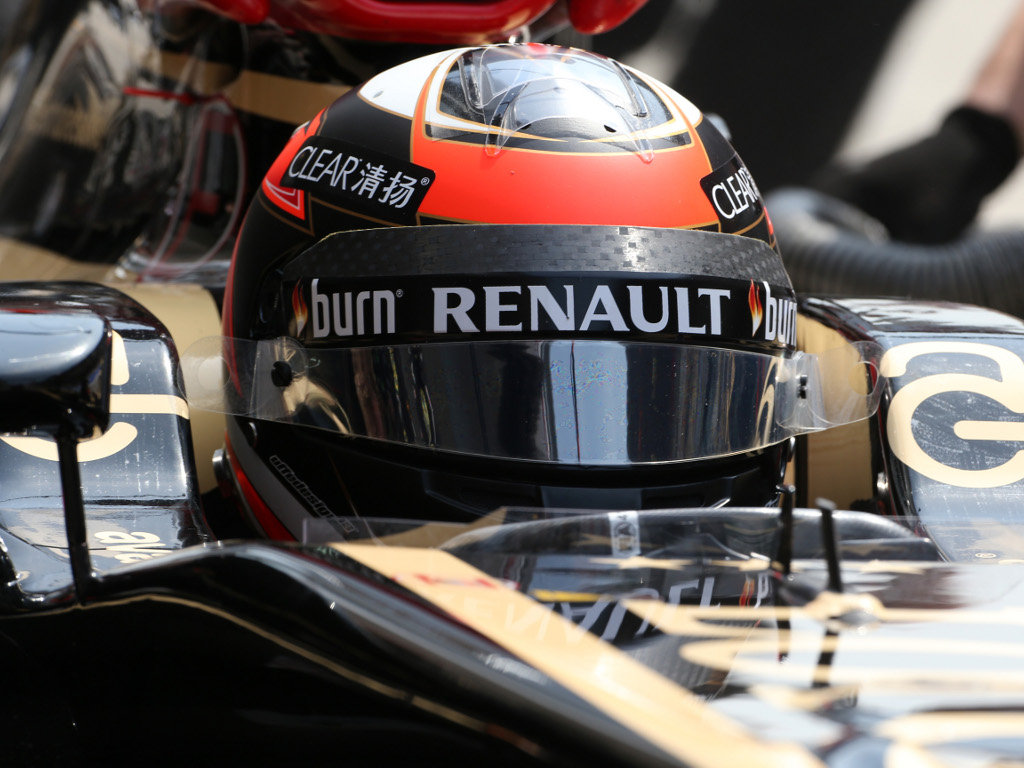 With another second place to his name, Kimi Raikkonen heads to Bahrain in an upbeat mood while Romain Grosjean has good memories of the track…

With another second place to his name, Kimi Raikkonen heads to Bahrain in an upbeat mood while Romain Grosjean has good memories of the Sakhir track.

For all the latest F1 odds on the Bahrain GP, round three of the 2013 F1 Championship, visit Sky Bet.
Kimi Raikkonen

Q. You must be in good spirits following your podium in Shanghai?
KR: “It was a pretty okay weekend, but it wasn’t a win and it’s still early in the season so we’re not celebrating too much yet.”

Q. What are your thoughts on the next race in Bahrain?
KR: “Obviously, it was a good race for us as a team last year. It was my first podium for Enstone, and we had a good fight all the way. We took a gamble during qualifying, and it didn’t work out well for us. This meant we missed out on the top ten, but we managed to use our tyres pretty well in the race and we ended up fighting for the top step of the podium, which is always a good thing.”

Q. You fought for the win with Sebastian Vettel last year; with the benefit of retrospect, was there anything different you could have done to get past him?
KR: “I could have tried to overtake him on the other side! I only had one shot and I picked the wrong side. After that I was unable to fight back and second was still a pretty good result, but it’s always better to finish on the top step of the podium.”

Q. How do you rate the Sakhir circuit?
KR: “I like it. I’ve had some nice races there and picked up some good points although I’ve never won. It’s a little bit different from others we visit and it’s quite nice to be out there in the sand! Wherever you look around the track you can just see sand in the distance and you notice it in the paddock too. It’s a circuit where I’ve never won before, so maybe this year I’ll change that.”

Q. How difficult is it to get the car as you want it in Bahrain?
KR: “It is not easy to find a good set-up as you do experience the track surface changing over the weekend and sometimes the wind can affect the balance of the car too. It’s one of the more tricky places to get the car exactly right, but at least you don’t often have to worry about rain!”

Q. Is there potential for another good result?
KR: “Apart from Malaysia we’ve had good races this year, but that said there have only been three so it’s too early to say anything. Just because we had a good result there last year doesn’t mean Bahrain will be good for us again this year. We have to try and do the best we can in every race and try to score some points to keep us in the fight. If everything goes our way, it will be a good result again. However, it is useless to promise anything beforehand. This is motor racing and whatever can happen, will happen.”

Q. How was it to achieve second place in China?
KR: “Second wasn’t quite what we wanted, but in the circumstances it was the best that we could manage. I wasn’t 100 per cent happy because we didn’t win, but it is what it is and second place was a good result after a bad start and the incident with Sergio [Perez].”

Q. Do you think you will start modifying the bodywork of your car in the future?
KR: “It’s unfortunate when a slower car gets in your way like that and you never know if it could happen again. Obviously the car is not designed like that otherwise we would use it all the time, but I was surprised how good it was still. We had trouble with understeer and some other handling issues, but we had to try to live with that and the pace was still pretty okay.”

Q. Tyres seem to be quite a talking point again; what do you think?
KR: “I think you can push on these tyres, but it’s never perfect. You cannot always push 100 percent. I think they are very good in qualifying and have good grip, so it’s up to you and you have to look after them a bit more in the race. It’s not really any different from last year – at least for us anyway – so I don’t really understand why people are complaining.”

Q. It’s fair to say that your weekend in China wasn’t exactly what you wanted?
RG: “I wasn’t happy with ninth place, but at least it was a points finish. It was a long, tough race and again we were able to make it work quite as well as we wanted. We started sixth on the grid and I thought we had a good chance to end up within the top five, but unfortunately we could not manage it.”

Q. Where do you think your race unravelled?
RG: “We struggled all weekend to get the balance right. It felt a lot better in qualifying but in the race I just couldn’t find the performance. I made a good start, climbed a few places and was sitting close behind Kimi for a short while, but then the tyres just fell off the cliff and I dropped right back. As the race went on I ended up getting stuck in traffic which obviously didn’t help, but I still have some work to do to try and find more from the car.”

Q. What are your feelings heading to Bahrain?
RG: “I have good memories after a strong race there last year that’s for sure! Our car worked well and we seemed to like the heat so it’s a race I’m looking forward to. We should see some consistent weather too, which always helps when you are trying to set up the car for the weekend.”

Q. Finding the right setup and getting the car exactly as you want it seems to be quite a challenge at the moment?
RG: “I would be lying if I said the car is exactly where I want it and we are having quite an adventure to get the right setup and feeling from the car. This is very frustrating for a driver, as you want your car to be obedient – to do what you want it to do – and to do it in a consistent manner. Certainly, we’re not the only team who are having a difficult time early in the season, but it’s something we really want to get on top of as quickly as possible. I’m spending a lot of time with the engineers and we’re all working hard to make improvements.”

Q. What worked so well for you in Bahrain last year?
RG: “It’s a track I knew from before Formula 1 and it has characteristics that I like in a circuit; some big braking into certain corners, some good change of direction with the double-left in the middle of the racetrack and it all flows quite nicely. Last year we got a good balance with the car and were able to make use of the E20 being kind to its tyres. The E21 shares that characteristic, so let’s hope we have more of the same this year.”

Q. How did it feel to get your first podium here 12 months ago?
RG: “It was a great feeling to get my first podium, and a really proud day for the whole team who did an incredible job. I think we got almost everything right that day.”

Q. What’s the target in