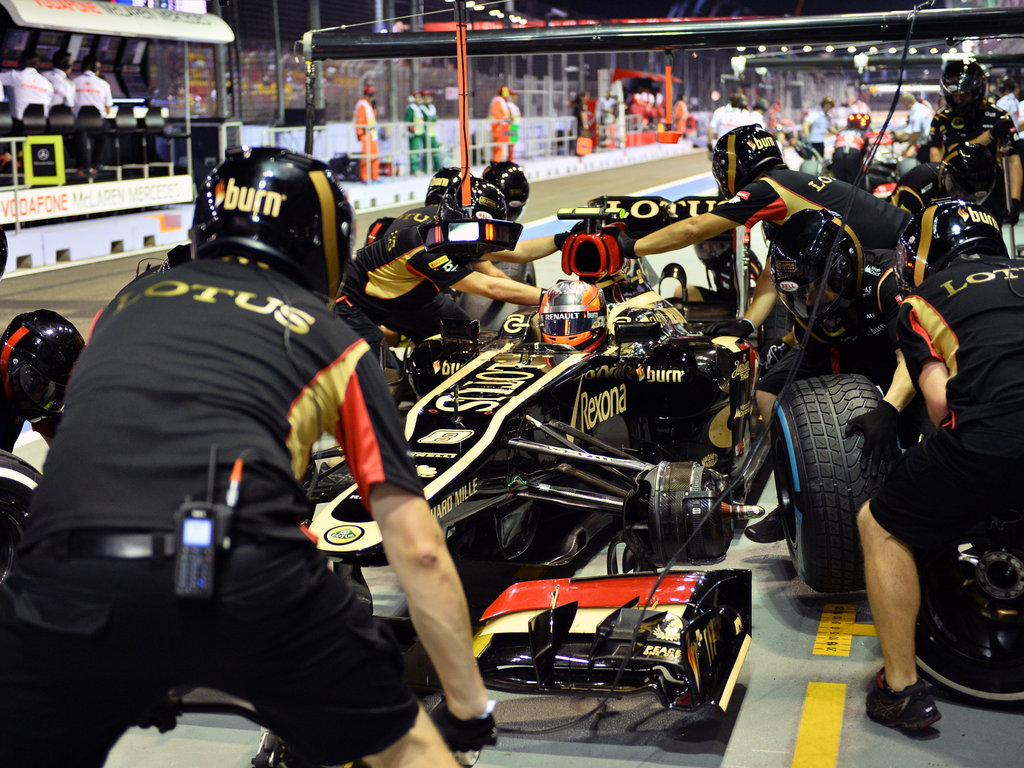 Lotus are wary of the unpredictable weather changes in Sao Paulo, which could influence tyre strategies throughout the weekend…

Lotus are wary of the unpredictable weather changes in Sao Paulo, which could influence tyre strategies throughout the weekend…

Romain Grosjean: Interlagos is a fantastic track; there’s really no part of it that isn’t great. It suits my driving style so I’m really looking forward to it. The E21 has been performing really well this year and there’s no reason to think it won’t be a great car once again in Brazil. It’s a fantastically challenging track which never seems to let you relax. Even the main start-finish ‘straight’ isn’t boring as it starts uphill with some interesting camber, then gradually turns before finishing at the downhill turn one where it’s so easy to out-brake yourself. If I had to pick favourite parts of Interlagos, I would say the first and last corners.

The first corner is really technical and punishes you if you get it wrong, while the last corner is so fast and really puts quite a strain on your body. As a driver I really enjoy these corners. It’s one of the real classic old-style tracks so it’s very hard to pick out a single element; I love it! It’s always fantastic to be on the podium and of course the top step is always our target. We won’t know how well we and our opposition will perform until we’re out on track, but we’re certainly pushing to do the very best we can.

Heikki Kovalainen: Interlagos is a great circuit and certainly different from Austin. There are some really nice corners, some more ups and downs and it runs anti-clockwise. The weather can be interesting when there’s potential for rain as it can make for some really challenging conditions. It’s a good place for us to end the season as it’s one of those tracks where anything can happen. The track itself is quite tricky. It’s pretty narrow in parts and you need to make sure you get your lines right or it’s very easy to make a mistake. It’s also fair to say that it has one of the best atmospheres of the whole season.

The fans are incredibly passionate about Formula 1. They’re very knowledgeable and they turn the whole weekend into a giant party in the stands. It’s pretty cool on Sunday when you’re on the gird and all the stands are bouncing. It really is a cool place to race Formula One cars. It was quite a smooth weekend up until the race in Austin, but in Brazil it could be a different story so let’s see how it goes. The main thing is to try and get a good result. The car is right up there – we saw that with Romain’s performance in Austin – and it’s really good to drive so the potential is there.

Certainly, I don’t want to make any predictions. It could be a difficult weekend or it could be a great weekend; who knows? We just need to work well with the car like we did in Austin, get up to speed quickly so we’re in good shape going into qualifying, and try to avoid any issues in the race. A better start with a stronger first lap will help too of course; if we put all these things together we should have a strong race.

Eric Boullier: It’s the ‘Last Chance Saloon’ to score points and we want every single one we can get. We head to the race in fourth position in the Constructors’ Championship but with third still mathematically possible. You never know what can happen in this sport, so we’re going all out to score everything we can. If you look back over the years we have seen some fantastic races at Interlagos and the fans are always very enthusiastic. The circuit is unique and it seems to always deliver something special. We hope we can offer something to all the teams’ fans to end the season on a high.

Alan Permane: Interlagos is quite a tough track for drivers. It runs anti-clockwise with some pretty quick left-hand corners, so drivers certainly know that they are racing there! We wouldn’t be surprised to see the occasional helmet pad making an appearance to help the drivers’ necks. Engineering-wise, it’s a circuit where we can see quite a lot of track evolution over the course of the weekend so you’re trying to set the car up for a somewhat moving target. Historically, the circuit can get quite bumpy which adds an extra feature for consideration. The most recent resurfacing addressed this well, but every year the surface can be just a little bit different.

Downforce levels are a little bit lighter than in Texas or Abu Dhabi; particularly to maintain top speed on the long straight. This is something we’re paying extra attention to this year, as there’s now a second DRS zone on the straight. Being quick in the twisty bits but slower on the straight might produce a quicker lap for a car on its own, but as there aren’t so many overtaking opportunities at other parts of the circuit it would make the driver a sitting target in race conditions. Last year there wasn’t a DRS zone on the straight so we will revise our approach to setup accordingly.

Anything requiring top speed of course relies on engine power, so we’re working closely with Renault to ensure we can extract every last bit of horsepower in the most appropriate fashion for the final outing with the V8s; with the added challenge of the thinner, higher altitude air to contend with. Elsewhere there are some pretty quick corners so extra front wing is a consideration to balance the car. Turns four, five, six, ten and eleven are all challenging. In fact, there’s a lot of challenging corners here! You also need strong change of direction for the low speed turns eight and nine where good traction is required on exit.

The weather is always a consideration in Interlagos. S