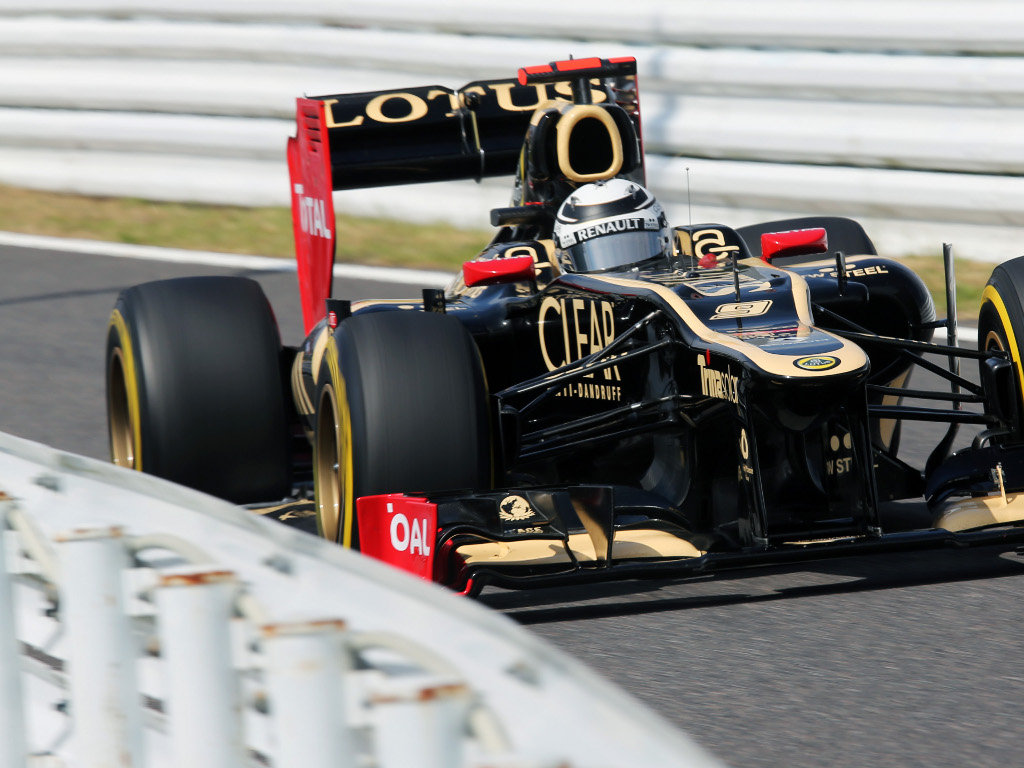 Kimi Raikkonen:
Q: You gained another solid haul of points last time out; are you satisfied with the result in Korea?
KR: I think fifth was about where we should have been. There were a couple of times where we were in a position to make up some places and – for different reasons – were not able to, but even so we didn’t quite have the speed to match the Red Bulls and Ferraris. I was pretty much on my own at the end of the race but we had to keep pushing to maintain position and it wasn’t so easy. I wouldn’t say it was a fantastic race but at the end of the day we still picked up points for the championship so it wasn’t too bad.

Q: Just four races to go now; what can you hope to achieve before the end of the season?
KR: There’s no point setting targets; we just need to keep working as hard as we can to score strong points and see what happens from there. In terms of the championship, the gap to Sebastian [Vettel] is quite big now so it will be very difficult to catch him, but we’ll keep pushing all the way.

Q: How is your motivation as the goal of the Championship becomes harder to attain?
KR: We have to keep working hard and keep a high level of motivation. Personally I feel my own motivation is very high – like it has always been. I’m keen to get the best results I can. Of course, in 2007 the championship wasn’t decided until the last race so anything is possible. Let’s see what happens.

Q: What have you heard about India as a Formula 1 destination?
KR: India is a brand new place for me. Like with Korea, I’ve never been to the country before which means I’ve never seen the circuit properly. I’m not like other drivers, so I haven’t driven the simulator to learn it, but all in all it’s not that much of a tricky situation. I like to go to different places and the challenge of driving a new circuit is always interesting. So far I’ve learnt tracks after a few laps in FP1 on Fridays. I didn’t have any problems learning the Yeongam circuit that way, and I don’t expect to have any issues here either. As for India, I have never visited the country before… I have certainly enjoyed Indian restaurants in almost every country I’ve been to though!

Q: Any special considerations for the weekend?
KR: We know this circuit is likely to be very dusty at the start of the weekend so that will make things interesting for the first practice sessions. We’ll have some new things on the car and it will be our second time with the new exhaust system so hopefully we can make more gains with our pace. India should also be pretty hot which should suit us. I’m looking forward to it

Q: You’ve been to the Buddh International Circuit before but not yet driven it; what are your thoughts on the track?
RG: I was at the circuit with the team last year in my role as third driver and it was fascinating to see Formula 1 come to a new venue like India. The track is very impressive, in the middle of what will be a massive facility. The layout looks very interesting, with some slow corners and high speed sections as well. I’m sure it will be a great track to drive and I’m looking forward to unlocking its secrets so it can go into my portfolio!

Q: You seem to learn circuits pretty quickly; how do you achieve this?
RG: There have been quite a few new tracks for me to learn this year and I am lucky as I usually pick them up very quickly. Hopefully it’ll be the case again in India so we’ll have time early in the weekend to work on the set up for qualifying and the race. With all the data we have today we know more about what we need to do in the corners; things like what brake pressure to use on approach, how much throttle to use on exit, how much speed you can carry through the mid-phase of the corner… all this can be looked at with your engineer in advance. In a way it’s easy when you know to use exactly 80 bar of pressure on the brakes or 80% of lift on the throttle for example. You take this information with you on a lap and you know how the car should behave. Of course you find the limit as you push more and more – there are always one or two corners that are more tricky – but normally the majority of the track is actually quite easy.

Q: How difficult is it translating the telemetry and feedback into quicker lap times?
RG: When you’re experienced with your engineer then you know what to do if they tell you 2kph quicker or a little less lift in this corner for example. From there feeling takes over the rest so you have to sense where to go a little quicker.

Q: Inevitably there were a lot of eyes on you in Korea and you were put under pressure a few times on track; how was it from your perspective?
RG: For sure I was a bit nervous starting the race as there was quite a lot of pressure. Myself and the team did a lot of work trying to understand a few things and it’s certainly helped. It wasn’t the easiest start; there was contact behind me at turn three and I took evasive action but after that it was quite a straight forward race and I could push how I wanted. I’ve been my own worst enemy at times this season, but hopefully now we can put it behind us and move forwards.

Q: You finished the race where you started in Korea, but do you think more was possible?
RG: Maybe we could have achieved one place better. It was frustrating being stuck behind Nico [Hulkenberg] for so long as we were clearly faster, but when I finally got the chance to pass I ended up losing two places as Lewis [Hamilton] joined the battle. We lacked a little bit of power exiting the corners compared with them so there was not a lot I could do. I think I now know every detail of Force India’s car after spending so much time fighting with it! Even so, I was happy to make it to the chequered flag after a good, clean race.