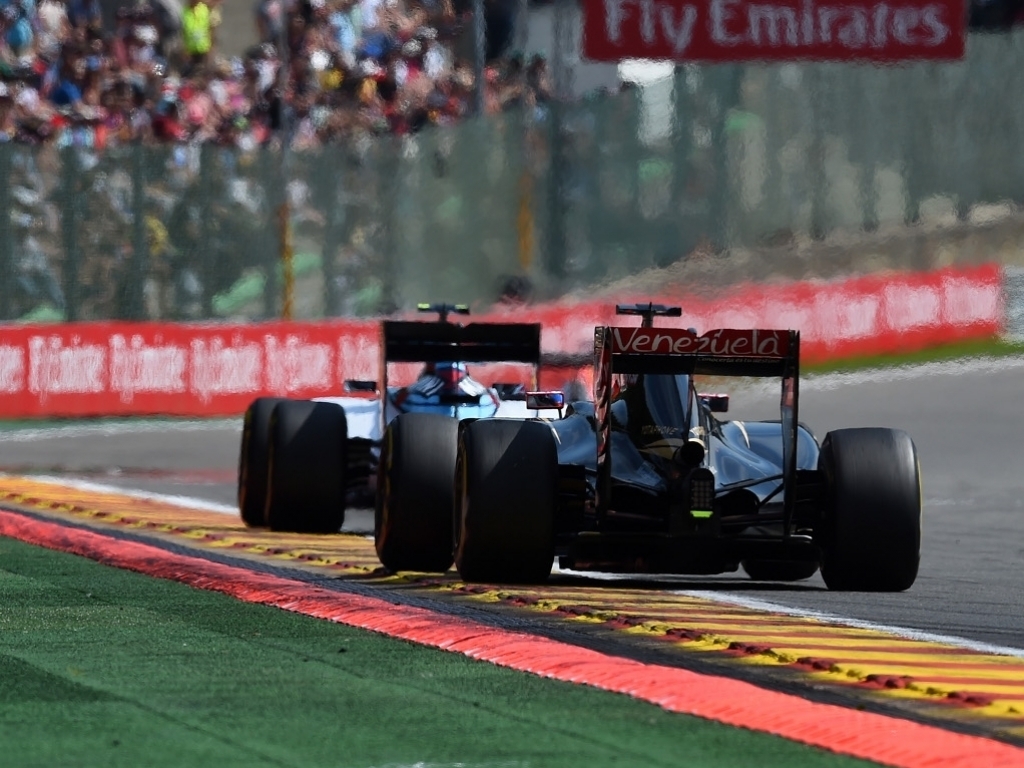 Romain Grosjean
Q: How goes the high after your Spa podium?

RG: I still have a massive smile on my face about it! What a race and what a performance from everyone in the team. We have a great car in the E23 and it worked so well around Spa Francorchamps. Everything came together so well. I probably drove the best race of my career, but it was thanks to the hard work of everyone at Enstone that I was able to perform at the top of my ability on that day. It felt almost like a race win.

Q: Could you have passed Sebastian Vettel if he hadn’t had his tyre issue?

RG: I was closing in on him pretty quickly and I’d have done everything I could to get past him. He’s a pretty tough competitor, but I was VERY determined at that point. It’s only a shame that he did have his tyre issue on track as I was really looking forward to fighting him for that position and I’m convinced I would have taken the final podium spot.

Q: How do you like Monza, the Theatre of Speed?

RG: I like Monza a lot because it is so distinctive. It’s a great track that has a lot of racing history. This makes it nice for us to compete at a place where all our heroes raced too. There is a lot of atmosphere around the track and to race in the setting of the royal park makes for a really special ambience. Of course the Ferrari fans are a big part of it and it is really nice competing at such a legendary venue.

Q: Any special memories from Monza?

RG: One of my first ever races in cars was at Monza back in 2003 when I was driving in a category called Formula Lista where I won and then went on to win every race of my rookie season in that formula. I have had some other big results at Monza too throughout my career, so it holds lots of good memories.

Q: What aspirations do you have for Monza this weekend?

RG: On paper, Monza should suit our car better than Spa so in theory a podium could be possible again! Of course, we don’t know how our performance relative to our rivals will stack up until we get there, but I’m certainly going out for the strongest result possible, as I always do.

Q: What’s the key to a strong result in Italy?

RG: You need your car to be as slippery as possible and quick in a straight line, and in that regard we’ve looked pretty strong so far in 2015. Then we have to manage the tyre degradation. Also for us it will be tricky in the big corners like the Lesmos and the Ascari chicane because the less downforce you have then the more difficult it is to get good grip in the turns. It is a tough compromise but one I am sure that the team will get the best solution possible.

RG: I know a great Pizzeria close to the track, so it is pizza all the way for me. But I am always careful because it can catch up very easily on the weight side of things! Italy is a magic place and the cultural aspects are a big part of that. Like a lot of drivers I did a lot of racing there, even since karting days so I feel like I know the country very well. I don’t know anyone who does not enjoy being in Italy.
Pastor Maldonado – Second Homecoming

Pastor Maldonado
Q: What are your opinions of racing in the Parco di Monza?

PM: I like Monza and I love Italy. I actually used to live very close to the circuit when I was starting my career here in Europe. I have won races here so it holds some good memories and special feelings for sure. I have a lot of friends here and a lot of supporters who come and see me at the track, so it is very nice to catch up with them all. The track is totally unique and of course it is great to be racing where all the old heroes did too. Monza has changed only very slightly over the years and it still has the character of the old banking and the parkland trees as you drive through it and of course the fans create a great atmosphere which is a great soundtrack to the Grand Prix.

Q: Any particular expectations for the Monza weekend?

PM: I am really looking forward to Monza this year. We’ve shown our car to be pretty good through the speed traps this season and Monza is where you want to be as fast as possible in a straight line. Coming off the back of our performance in Spa it’s going to be really interesting to see how we go; I have a good feeling.

Q: Tell us one word that comes to mind when you hear the word Monza?

PM: Speed. It has to be speed because the track is all about how fast you can go on the start/finish straight and then also on the back straight too. We are reaching the highest speeds of the season on these stretches. One of the critical points is the Parabolica corner. You have to get this right at the end of your lap to ensure a good time, and if you get it wrong it also compromises you for the next lap. It’s difficult to do this as the car is set up for low downforce on the straights, so it’s more difficult to drive on the corners – especially a long corner like Parabolica, which is tough and fast, the most crucial at Monza.

Q: Last year the outside of Parabolica was changed from gravel to tarmac; did this make a difference?

PM: The approach was still the same, which is to take it as quickly and efficiently as possible. Of course you are aware that it’s safer and there’s less penalty in going off and this is good from a safety point of view because it is a quick corner with not that much room on the outside.

Q: How frustrating was your Belgian Grand Prix?

PM: Of course, it’s frustrating not to finish any grand prix, but it was particularly so in Belgium as we really had potential to go well. Romain did a great job to finish on the podium and I started my race ahead of him on the grid. We know what is possible and our car should go well in Monza. I would love to score a very strong result in Italy as I have so many fans there.

Q: Were there particular lessons learnt?

PM: We’ve gone through the data and we think we know what we need to do to avoid a similar situation again. Spa's a pretty unique place so it’s unlikely we’ll see the same set of circumstances again. It was good to watch the team get a good result, but it would have been better to have been part of a strong result for both cars on track.

PM: Both. Definitely both. But not at the same time of course!