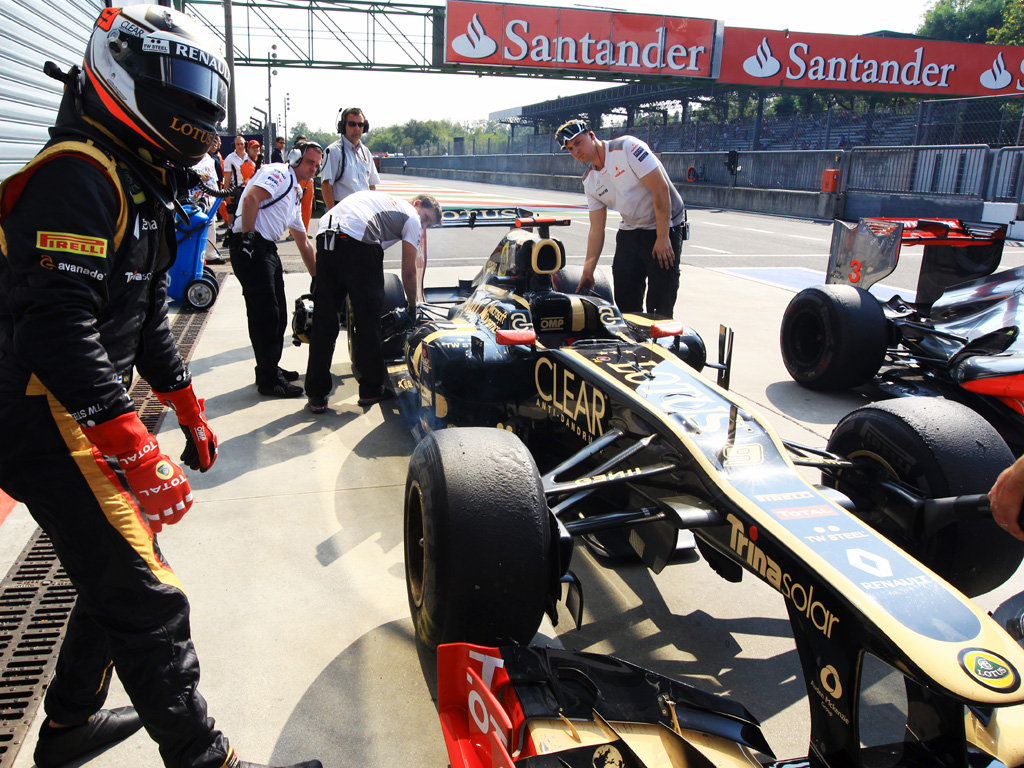 Kimi Raikkonen
Q: Are you looking forward to the Singapore Grand Prix?
KR: I really like going to Singapore. It’s a great place to be, I love the local food and I don’t mind the unusual times we run in the car. I have some unfinished business after my two GPs there so far, as I have never scored a point. That doesn’t mean I’m not quick there as I’ve been told I still hold the lap record from 2008. I crashed while fighting for fifth place that year and finished down in tenth in 2009, so I want better this time.

Q: What difference does it make racing at night?
KR: In the first two years of this GP, I was a little bit surprised by how people were talking so much about the different timing. When they switch on the lights, it’s exactly the same as racing in the day time. I think everybody in F1 enjoys the night race in Singapore. It’s worked out really well as it’s a buzzing city and lots of people turn up. Apart from one or two dark spots in the run-off areas the circuit is very well lit, so there is not a big difference to racing in the day.

Q: Regardless of being at night, it’s another street race; what effect does this have?
KR: Monaco was not that good for us, but Valencia was one of the best weekends so far. Obviously, there is no reason why Singapore should be any different compared to Valencia. Like at every street circuit, it’s very difficult to pass other cars there, so starting the race as high as possible on the grid is a very important factor to get a good result.

Q: How do you think the circuit will suit the E20?
KR: Everybody will bring updates to this race so we’ll have to see what difference that makes. It’s a case of trying to get the maximum from our package and working on achieving the best balance. If we get everything right we should do okay.

Q: What’s your target?
KR: Obviously, the podium is a target again. We have had six podiums so far and scored as many points as the top guys in last few races. We have managed to get everything out of our package. Hopefully we are able to carry on in the next races, too.

Q: Any worries about the weather?
KR: Every year they say that it will rain in Singapore when the evening comes. Well, we’ll see when we’re there. It’s no use to worry about it. It will be the same for everybody, anyway.

Q: Monza was a tough race for the team?
KR: We didn’t have enough speed in the car. We were thinking that sixth or seventh would be a realistic finishing position so fifth was probably the maximum we could have achieved. Our speed down the straights wasn’t so good, which made it quite tricky to defend from cars behind. When you look at it like that it’s not a bad result.

Q: You’re up to third in the Drivers’ Championship. How high up the order can you go?
KR: We’ve lost some points to Fernando [Alonso] which is not so good, but we still managed a decent result in Italy and it’s good to be up to third in the Championship. It’s impossible to say how this season will turn out, but we’re very close to second. We’ll see what happens in the next few races.

Romain Grosjean:
Q: Obviously watching the race from the pit wall in Monza was not ideal; do you feel you gained anything from that experience?
RG: I think for me, the main thing about Monza was being in the garage and feeling the support I had from the team. It was really nice and I think that’s something a driver needs. We’re a family here and it meant a lot to me. Apart from that, being on the pit wall with the engineers and looking at the data is always useful. You get another perspective on how the cars are performing, where the differences are, what can be improved and so on. I can still learn a lot from Kimi too; he has a huge amount of experience. As a team-mate he is both challenging and fantastic; challenging because he is so quick and has abilities I have yet to develop, but fantastic because he is also a great example to follow in the way he can switch his mind set so quickly during a race weekend to be entirely focused on the job. Apart from actually being in the car, I think the weekend in Monza was the best preparation I could have for Singapore.

Q: The last few races have been a bit of a mixed bag for you it seems; what will be the key to hitting top form over the rest of the season?
RG: I would say that since Hockenheim I haven’t really had the same connection with the car as I had previously. At the start of the season I felt very comfortable and by the time we got to Valencia the sensation I had in the car was just amazing. Whether it’s the tyres, the setup or something in my driving style I’m not 100% sure; we need to go through everything and find out. The grids are so close this year that any tiny thing can mean the difference between being at the front and sitting in the midfield. I’m determined to find that synergy with the car again in Singapore and carry it through the rest of the season.

Q: Kimi has now moved up to P3 in the Drivers’ Championship; will this affect your approach if you are racing alongside him at any stage?
RG: I wouldn’t say that for the rest of the season I’m here just to play a supporting role; if I have the opportunity to reach the podium, or even a win, then I will take it. Of course, I want the team to achieve the best results it can and if you look at the points difference between me and Kimi it would be foolish to think only of my own results. Let’s hope we can have a fantastic end to the season for me, Kimi and the team.

Q: What are your thoughts heading to Singapore?
RG: Singapore is a pretty special race with it being held at night; it makes a great show for the fans. It’s a pretty cool city. I haven’t got much experience of the circuit so far; my first race here was back in 2009 and that was a difficult weekend, but I’m looking forward to getting back in the car, learning the track a bit better and putting everything in place for the rest of the season. It’s another circuit, another race and a chance for me to get back out there and do my best. I want to qualify well, be as close to possible to Kimi in terms of performance and score points for the team in the Constructors’ Championship.

Q: You’ve always seemed to go pretty well at street circuits; looking at the layout here, do you think this is a track that should suit both yourself and the car?
RG: I think so yes. It’s a very high downforce track and