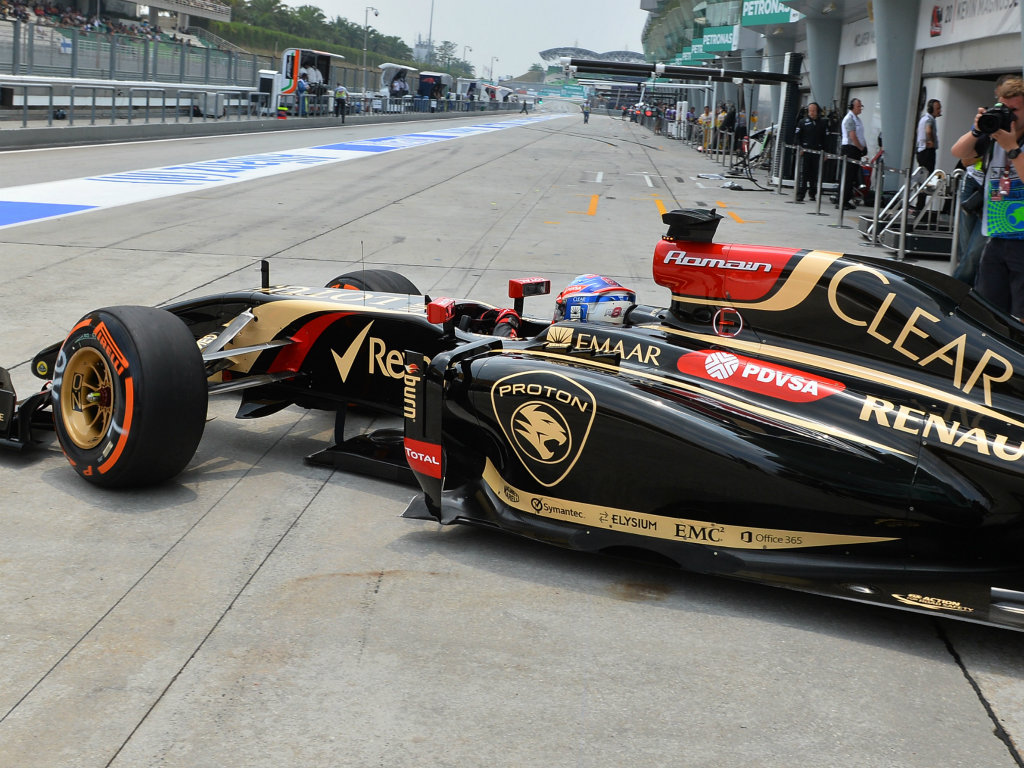 Romain Grosjean:
Q: Romain, is it a case of glass ‘half full’ or ‘half empty’ after China?
RG: The gearbox problem was obviously a big disappointment. But the overall picture for the whole weekend was 90 per cent positive. We didn’t get a reward at the end, but we know we made a step in the right direction with the car. Before the problem in the race we were the second Renault team, also in front of the McLarens and fighting with Force India. That was positive.

Q: Do you think the car is now delivering its potential?
RG: I think it is getting there. It is still not as good as we believe it can be. The aim in Barcelona is to keep improving, but we know we have a decent platform to work from and solve the remaining issues. Of course power unit wise we are not yet equal to the best and from our side we are still behind the top Renault team.

Q: How do you explain the progression made at the last race?
RG: On the exterior the car looks the same however we had a number of mechanical upgrades and also improvements that came from Renault Sport F1. Also, we continue to learn and understand the E22 and how to exploit areas we can continue to improve on.

Q: It seemed the team made a bigger step than the other Renault teams in China?
RG: Yes. On paper we made a big relative improvement in China but it wasn’t just one thing. We took the Renault updates and our own updates as well and moved forward. Altogether we made a big step, even though there were no massive changes on the car – we’re just trying to make everything work together better. There is more to come for Barcelona.

Q: What does returning to Barcelona mean for you?
RG: Barcelona means the start of the European season. That also means we can travel less, which is good because I’ve now seen every single movie on the plane! But seriously it’s easier for the engineers to bring new parts to the track and it’s always nice to see European fans. I’m happy to be back in Barcelona. I have some good memories and it’s a track where I finished fourth back in 2012. It is a circuit everyone knows well, so as a team we go to Barcelona intent on getting much more performance from the car. We are concentrating on this goal. We just have to push as hard as we can and stay as positive as possible even when the going gets tough. As a team we have to stay united, it will make us stronger as a unit.

Pastor Maldonado:
Q: Pastor, what did you ‘takeaway’ from China?
PM: We had a good start and first lap, but then because of the lack of top-end speed we were struggling to overtake and lost a lot of time behind slower cars, which compromised our final result. Lap by lap our pace was improving, but it was not enough to pass more people. I think we need to work very hard to increase the top speed so that we can attack more during the race. Otherwise the car is not too bad and it can only improve from here. We achieved a good step forward for the Chinese race. Now we have time to review the data and try to do the same again in Spain, hopefully giving us a good chance to fight for points.

Q: Tell us about the Circuit de Catalunya?
PM: The circuit has certainly been very good for me in the past, with the win in 2012 being the highlight. A top ten in qualifying will be our first focus and then it’ll be a very tough race in terms of tyre management, with a lot of pit stops and strategy. Last year most did four stops but Lotus F1 Team were able to make three stops to finish second. Overall Catalunya is tough for the cars, drivers and teams because everyone knows the track so well and you have to fight for every thousandth of a second. There are obviously races that are much closer to Venezuela in a geographic sense, but Barcelona is special for me because there is a huge community of Venezuelans close by and of course my mother tongue is Spanish. So I hope to see a lot of flags around the track and some great support as usual. It’s always good to race in front of your fans and I am determined to continue my good record there.

Q: What do you remember about the win in 2012?
PM: It was a great day in my career, a strong race and victory over Fernando Alonso in his home event. We really deserved it because we did it on merit and under big pressure from the Ferrari all race. People forget that we were outside the top ten on Friday and then everything came together. We qualified second – pole after Lewis Hamilton was disqualified – and I knew there was a chance to win the race. I just felt so calm and ready to win. That weekend, after being 17th in first practice, shows why you must never give up in Formula 1. It also gave me more confidence because my first year in F1 had been difficult, but as soon as the car was competitive I was up there, fighting with the top drivers. My mentality changed and this now drives me forward when times are tough.

Q: What would be a realistic target for Barcelona this season?
PM: I’m expecting to be more competitive. It will be very important to start scoring some points, but if everything goes well and we get some luck too then a top five is possible. It is going to be difficult – there are the two Mercedes and two Red Bulls and then others who have shown good pace in recent races like Force India – but if we get 100% from the car we can fight all of the other teams and come away with something good to build on.

Q: What are you expecting from the technical updates?
PM: Clearly we expect the updates to be positive, but it’s difficult to say how big the relative improvement will be because everybody will bring updates and nothing stands still in Formula 1. The bottom line is that we must keep improving and pushing. We won’t get to the end of this season and look back to think we could have done more. Everyone is fighting 100% to get back to the front of the grid. When we get there it will be even sweeter.

Q: How important is it to get points as soon as possible?
PM: It is vital because this team and the drivers are used to scoring lots of them. But more importantly it will act as a trigger for more confidence throughout the team and it will mean we can act on that and feed off it. The races after Barcelona are Monaco and Montreal where many variables usually happen. We have to be in the right place to take advantage of these and to enable a good platform for the summer.