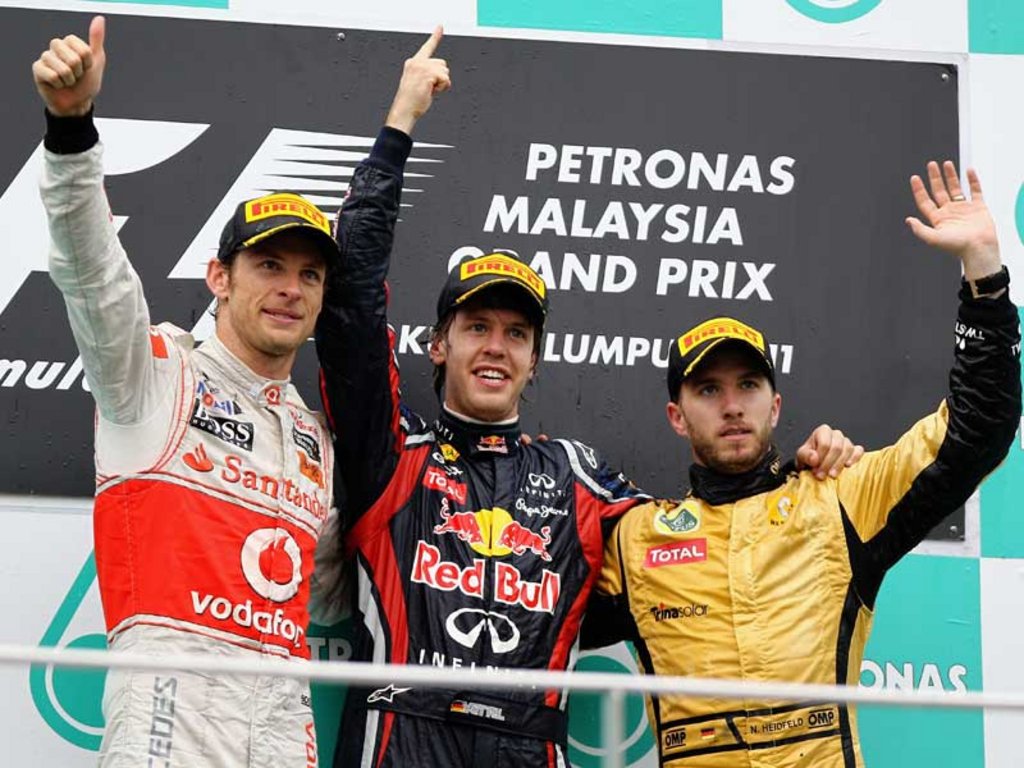 Star of the Race
Sebastian Vettel, Red Bull, Winner
Another untroubled win from pole for Vettel. Despite some mid-race radio traffic that suggested he wasn’t using his KERS, Vettel seemed in control of this race from the opening lap. An exemplary qualifying performance, a great start and no mistakes in the race – what more could you ask for? The “KERS is not working” message was so laboured, and then repeated, that it sounded like some elaborate practical joke. Because after that transmission Vettel started to open up a gap to his rivals that he hadn’t enjoyed up to that point in the race.

Overtaking Move of the Race
Lap 50: Mark Webber on Felipe Massa for P5
Mark Webber suffered for his lack of KERS at the start. If ever there was a demonstration of how important the technology was, Mark’s fall from 3rd to 9th in the opening sprint provided it. He battled on manfully with a strategy none of the other front runners tries out of choice – though Hamilton and Alonso were forced into – and he made it work. When he came up against Felipe Massa in the closing stages of the race Massa had the advantage of KERS. Mark steamed round the outside of the Ferrari driver into Turn 1, flirted with the marbles (or as Michael Schumacher likes to call them ‘the marble’) held on till he was on the inside for Turn 2 and managed to push Felipe out wide. Felipe tried to duck inside but Mark got good traction and was through.

Winners
Jenson Button, McLaren, 2nd
Jenson bided his time behind Hamilton while trying to figure out the tyres. From his post-race comments it is clear that simply looking after your tyres in the old way – of limiting wheel spin, not trying to go too fast too soon – is not enough and you’ve got to look after them a certain way. This might have been the key to his closing up on Lewis and passing him in the pit-stops (as well as Lewis’s delay). Hamilton’s sulky post-race manner seemed to be generated more by his failure to beat Button than anything else. If Jenson didn’t have problems, why should he have problems…?
Lewis Hamilton’s contention “We always seemed to be stopping the earliest” actually worked well for Jenson because it put him in front of Alonso.

Nick Heidfeld, Renault, 3rd
Heidfeld (or Heidfield if you’re name’s Quagmire) got the start of the race, launching himself from 6th place to 2nd by the first corner. Petrov shot off like a rat up a drain as well, making it two races in a row that he’s rocketed up the grid. Last season he normally made contact with someone before he’d gone very far, but so far this season he’s kept his no claims bonus intact.
Heidfeld’s race pace was just enough to prevent Lewis Hamilton from using his DRS to any benefit and he effectively ruined any chance that Hamilton would have of challenging Vettel without the intervention of rain.
All this talk about ‘qualifying not being so important this year’ can be put aside now because at Sepang we saw how Hamilton’s failure to keep Heidfeld behind him gave Vettel a gap that he could manage.
A great race from Nick, though benefiting from the glitches of Webber, Alonso and Hamilton each of whom could have been on the podium.

Felipe Massa, Ferrari, 5th
Another great start from Massa and a strong race. I don’t quite understand why the BBC commentary team feel the need to read out the last rites for Felipe Massa’s career at the second race of the season. Massa’s doing fine – a robust performance in Melbourne, a good one in Malaysia. They only need one Fernando Alonso in the team – and they have one already. The mildly ludicrous suggestion that after one race they should be looking at Sergio Perez is almost as ridiculous as employing a current team member as a commentator.

Kamui Kobayashi, Sauber, 7th
Kobayashi overtook more people at the Malaysian Grand Prix than Sebastian Vettel does in a season. The Japanese driver had loads of fun with Mark Webber in the opening stint of the race and then when he disappeared up the road he resorted to having fun with Michael Schumacher instead. What was most impressive was that they didn’t touch. Fabulous combative driving.

Michael Schumacher, Mercedes, 9th
Schumi got a great start and at one point had his Merc up between the Ferraris on the opening lap. Michael probably would have made the trip to Malaysia for that alone, it’s got to be better than gardening on a Sunday afternoon. Most importantly, after being outqualified thanks to a faulty DRS wing, he got the edge on his hugely competitive team-mate.

Team Lotus
In qualifying the KERS-less Lotus was 0.5 down on the Williams at the end of Q1. If the system is worth 0.3 of a second a lap, then to be only 0.2 (net) down in qualifying – on what is a strong aero circuit – is a major achievement.

HRT
HRT got both cars into the race with times that easily beat the 107% cut-off. Another fine result.

Renault’s sponsors
Not only did they pick up their second podium in as many races they got the best endorsement they possibly could for their sponsor. In the FIA press conference winner Sebastian Vettel was describing the start of the race: “I looked in my mirrors and I saw something black and I knew it was a Lotus.” The first Lotus had got ahead of the Vodafone while the other Lotus squeezed in front of the Santander.