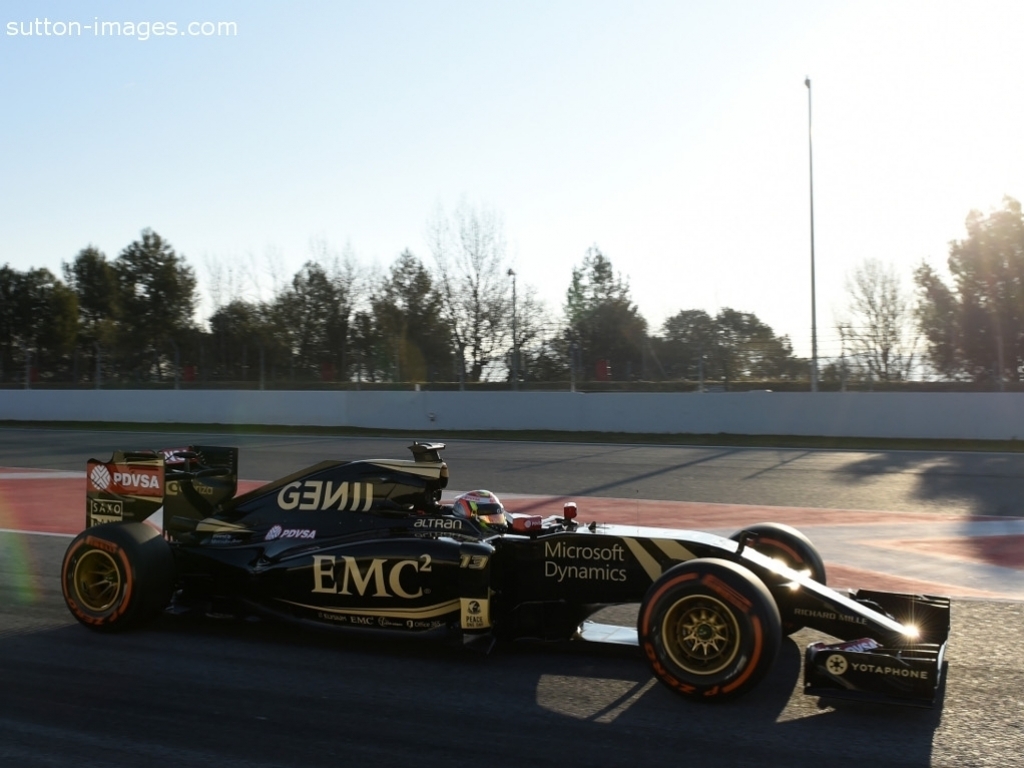 Pre-season testing continues to throw up interesting results with Pastor Maldonado in the Lotus setting the pace on day one in Barcelona.

At the opening test at Jerez it was all about Ferrari with the team topping the timesheets on three of the four days with the Ferrari-powered Sauber taking P1 on the other day. Both teams, of course, had terrible campaigns last year so their performances raised a few eyebrows.

Lotus are also coming off a nightmare 2014 season and they also didn't have the best of times at Jerez with their E23 arriving late.

However, they made a good start to the test at the Circuit de Barcelona-Catalunya with the Venezuelan hitting the front with a 1:25.011 in the final hour on the softs, pushing Kimi Raikkonen in the Ferrari to second place.

It wasn't the smoothest of days for Maldonado as he caused two red flags early in the day, but he was able to return to the track on each occasion and managed to complete 69 laps by the end of the day.

Raikkonen continued where he left off at Jerez as he was fastest for most of the afternoon session before being edged by 0.156s by Maldonado while Daniel Ricciardo in the Red Bull was third.

Red Bull had some teething problems in the morning, but everything was going well by the end of the day.

Sergio Perez was fourth fastest with a 1:26.636, but the Mexican wasn't expected to test on Thursday with Mercedes reserve driver Pascal Wehrlein in Force India's VJM07 at the start of the day. However, Lewis Hamilton completed only 11 laps before falling ill with a fever and Wehrlein was recalled by Merc, prompting Force India to turn to Perez.

Next was Nasr, who had an interesting day as he was fastest before lunch, but he was involved in a collision with Susie Wolff, who was 10th fastest, and both drivers were forced to spend lengthy periods in the garage before they were able to re-emerge in the final 30 minutes. Nasr, though, brought out the final red flag of the day with a few minutes still on the clock.

Another team who didn't get as much running as they would've liked with McLaren with Jenson Button completing only 21 laps in the MP4-30 before they called a halt to their day due to a faulty seal on the MGU-K.

Engine supplier Honda has admitted they might face similar problems on Friday as they are only expected to get the new part by Saturday.

Button's time of 1:28.182 was more than three seconds slower than Maldonado's best effort while debutant Wehrlein was also quite far adrift from the E23's pace for both Force India and McLaren.