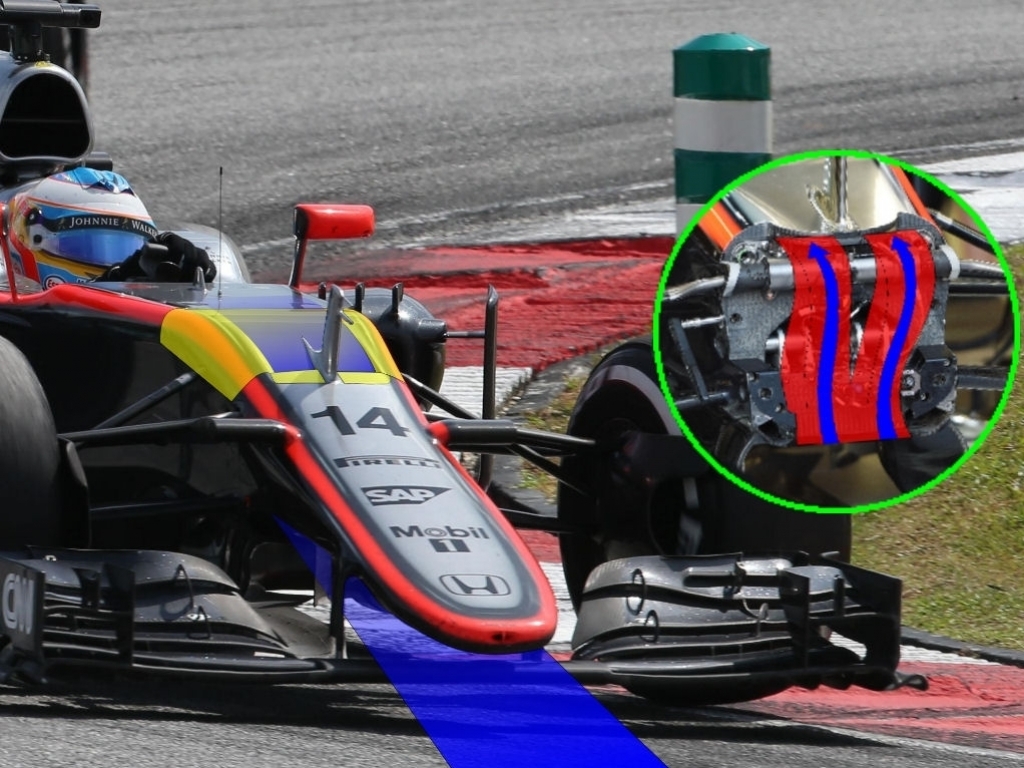 Matt Somerfield will be producing technical pieces for PlanetF1 this season and in his first piece he looks at the McLaren 'S' duct, which saw the light of day this weekend.

McLaren may be off the pace owing to their problems with Honda's power unit but the aero department is still working overtime to bring them some additional pace. The MP4-30 received a smattering of updates in Malaysia, with perhaps the most visceral of all their implementation of an 'S' duct.

The MP4-30's chassis and nose design has always lent itself to the use of an 'S' duct, which we'd have likely seen much sooner had testing gone more smoothly. However, with running seriously curtailed on the lead up to the 2015 season the team opted to work from the testing baseline for Australia and bring an update package to the second GP.

McLaren's installation of the 'S' duct pipework is very elegant when compared some of the other solutions on the grid, with a singular inlet at the base terminating with two outlets, one either side of the shapely pitot tube housing (illustrated in red on the inset image). Small changes were also made to the chassis vanity panel (marked in yellow on the main image) in order to adopt the solution.

The gains from having an 'S' duct aren't significant but enough to justify its inclusion in the original design concept. In short the 'S' duct increases performance by moving airflow from the underside of the nose/chassis, dispatching it into the airflows path above the chassis (airflow marked in blue on the main image).

The flow structures above and below the nose/chassis are improved by the 'S' ducts inclusion, with a reduction in the boundary layer beneath and less airflow detachment above, leading to a more energised flow regime.

The abrupt curvature of the nose/chassis junctures upper surface ordinarily leads to flow detachment, as the airflow struggles to stay attached to the surface of the car, creating lift. The 'S' ducts outlets provide an injection of airflow, drawing the nearby, detached airflow back to the surface of the chassis (Coanda effect), increasing performance.