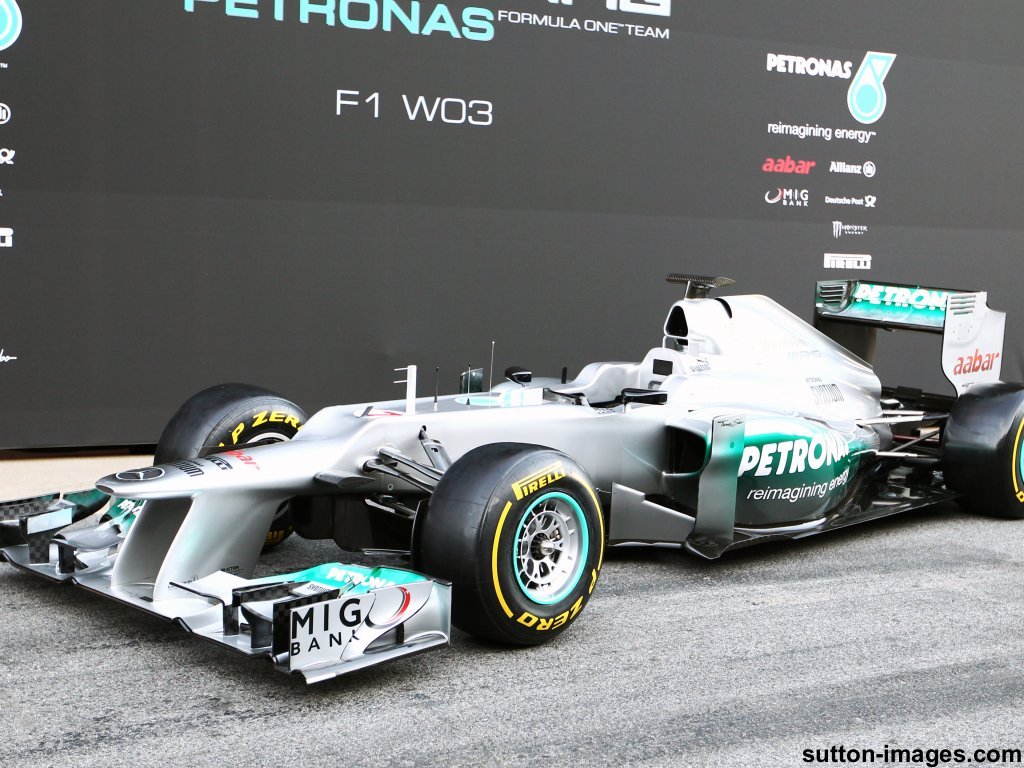 The teasing from Mercedes is finally over after the Brackley squad unveiled their 2012 challenger, the W03, on Tuesday morning…

The teasing from Mercedes is finally over after the Brackley squad unveiled their 2012 challenger, the W03, on Tuesday morning.

Michael Schumacher and Nico Rosberg took the covers off the car at Barcelona’s Circuit de Catalunya shortly before the start of the second pre-season test.

The car features the much-talked about stepped nose, which most of their rivals are also using this campaign. However, the W03’s nose appears to be a lot thinner and sharper.

According to a statement from the team: “The new car concept is based on a largely stable set of technical regulations, which nevertheless include two significant changes: revision of the maximum bodywork height at the front of the car, which encouraged the distinctive stepped-nose design; and new restrictions concerning the positioning of the exhausts, designed to prevent the aerodynamic benefit gained from exhaust gases during 2011, the so-called ‘blown diffuser’.”

The W03 completed more than 100kms during a filming day at Silverstone last week and then added another 300kms during a private test in Barcelona on Sunday.

“The F1 W03 is a car that I believe, and hope, our team can be proud of, and which will deliver the on-track results that everybody has worked so hard to achieve,” said team principal Ross Brawn.

“Notwithstanding the distinctive nose design, which is certainly an acquired taste, the F1 W03 is an elegant interpretation of the current regulations, and a clear step forward over its predecessor in terms of detail design and sophistication.

“Last year, we produced a very bold car and, although its more radical elements didn’t always deliver the results we had hoped for, the experience we gained has been invaluable to the design of the 2012 car.

“The F1 W03 is also a more integrated package, which reflects the ever-strengthening ties between our technical teams in Brackley and Brixworth, and demonstrates that our Silver Arrows works team is taking the next step forward in terms of on-track performance.”

Mercedes-Benz Motorsport Vice-President Norbert Haug added: “2012 will mark the third season for our Mercedes-Benz Silver Arrows works team, which was introduced in January 2010, and our target is to take a step forward in on-track performance.

“A lot of work has been done throughout the last year, not just to design the new car but also to build a technical organisation that is capable of delivering to its full potential, with consistency.

“Our ultimate goal is to become regular race winners and Championship contenders, and so to write another chapter of success in the story of the Silver Arrows which began 78 years ago. Our target this year is to take another step forward on that road.”