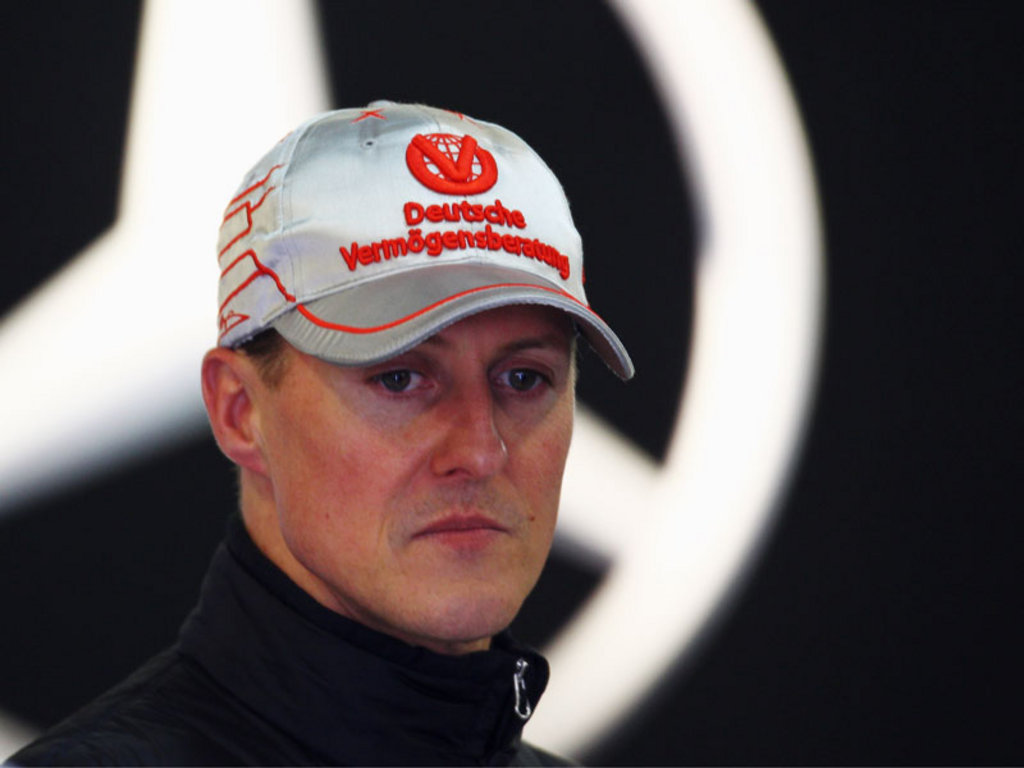 Often controversial, often brilliant and pretty often the F1 World Champion, Michael Schumacher’s days in Formula One are officially over.

Often controversial, often brilliant, pretty often the F1 World Champion but always immensely talented, Michael Schumacher was undoubtedly one of the finest drivers to grace motorsport’s centre stage. His shrewd racing mind and awesome driving ability, especially in the wet, brought him deserved praise and respect – if not popularity.

The winner of more grands prix and World Championships than any other driver in F1 history, Michael Schumacher returned to F1 in 2010, swapping his beloved Ferrari for Mercedes GP.

Following his F1 debut for Jordan in 1991, Schumacher made rapid progress up the F1 ladder and took his first World title in 1994. But along with success came controversy with race suspensions and accusations of bad sportsmanship that date back to 1994 when he was involved in a series of incidents, culminating in a collision with Damon Hill in the Australian GP, which won Schumacher his first Championship title.

Another infamous incident, this time with Jacques Villeneuve (at Jerez in 1997), was blamed on Schumacher and resulted in a one-race ban and the loss of his runner-up status in the Drivers’ Championship.

The following year he again came close, challenging Mika Hakkinen for the title right to the wire at Suzuka. However, Schumacher’s hopes died when he had to start from the back of the field after his car stalled on the grid. Many suspect Schumacher of making a rare mistake – Ferrari blamed the car.

1999 looked as though Schumacher might finally take the Drivers’ Championship back to Maranello. However a first-lap accident at the British

GP left the German with a broken leg. Despite missing six races, Schumacher returned in style in Malaysia, where he utterly dominated the entire weekend.

A year later Schumacher finally completed the job that he joined Ferrari to do. He clinched the Drivers’ Championship in Japan, handing the Italian team their first world title for 21 years. In Malaysia, he went on to complete the double.

Armed with the dominant Ferrari F2001 in 2001 and the F2002 in 2002, Schumacher, who’d previously won world championships in cars that weren’t

the best, proceeded to rewrite the F1 record books (almost certainly for ever). He won his fourth title easily in 2001 and cruised to his fifth world title in 2002.

But 2002 wasn’t without huge controversy. At the Austrian GP, the sixth race of the year, Ferrari team boss Jean Todt asked team-mate Rubens Barrichello to gift Schumacher the race. A furious Austrian crowd booed them on and off the podium and Schumacher was so embarrassed he put Barrichello onto the top step to take the winner’s trophy. He was booed heavily in Monaco and Canada afterwards.

Later in the year, at the US GP, it looked to be another Schumi victory when he backed off close to the line, attempting a dead-heat with his team-mate. It backfired and a surprised Barrichello found himself the winner.

Schumi’s success continued in 2003 despite the FIA implementing new rules intended to slow him down and level the playing field. The season though was a lot closer than the previous one with both McLaren’s Kimi Raikkonen and Williams’ Juan Pablo Montoya still in the running for the title at the penultimate race.

A controversial penalty at the US GP for Montoya however meant only Raikkonen could put an end to Schumacher’s run of success. The Finn, though, needed to win the final race of the season and for Schumi not to score. It was not to be. Barrichello stormed to the victory and assured his team-mate of his sixth world title. To be safe though Michael brought his car home in eighth place and won the title by a slim two-point margin, which gave his rivals a glimmer of hope ahead of the following year’s Championship.

Although Schumi’s rivals saw a glimmer of hope ahead of the following year’s championship, it was soon extinguished as Michael blitzed the field to win the first five GPs. Victory number six eluded him when he did or didn’t brake-check Montoya in Monte Carlo. Either way, the result was Schumi crashing into the tunnel walls.

However, his campaign was back on track at the European GP, which was the start of a seven-race long winning streak. His next non-victory came at the Belgium GP where he finished second behind Raikkonen. The eight points though were enough to ensure the German bagged title number seven.

But with the title came a change of fortune and the remaining four races resulted in just one victory and too many rookie errors for the World Champion. They also yielded his worst-ever qualifying position, a P19 at the inaugural Chinese GP. That race was also the only one of the 17 that he failed to score a single point in despite reaching the chequered flag.

Schumi’s fortunes did not recover in 2005, which saw the rule changes play an important role in the changing of then guard, especially the tyre regulations. Bridgestone struggled to produce a tyre capable of recording a competitive pace for an entire race distance.

Schumacher’s only win occurred at the United States Grand Prix, which took place sans the Michelin runners who had all withdrawn due to safety concerns. That win was one of only five podium finishes for the German, who could not nothing to stop Fernando Alonso from ending his five-year reign.

Schumi finished the season third in the Drivers’ standings having lost out to Kimi Raikkonen as well.

However, in 2006 the German bounced back strongly and, following a mid-season revival, was in contention for the World title right up until the final race of the season. It was not to be, though as a puncture sent him to the back of the field.

That race, the Brazilian Grand Prix, will forever be remembered by F1 fans around the world, as not only did it produce one of Schumacher’s most phenomenal drives ever but it was also his very last F1 grand prix.

Alonso was crowned champion, but with such a dignified and magnificent exit, Schumi had earned a host of new admirers.

The seven-time World Champion hung up his helmet at the end of the 2006 season, bringing to an end a career that spanned 16 years, yielded seven titles, 91 victories and 68 pole positions – records that many doubt will ever be broken.

His retirement, though, was short-lived as after a three-year break from racing, during which he served as a special advisor to Ferrari and rode motorbikes, Schumacher confirmed in December 2009 that he would return to the sport that gave him so much pleasure. But not with Ferrari, instead, he joined Mercedes GP in what many viewed as the coupe of the decade and one of the biggest gambles ever.

Schumacher entered the Championship making it clear that he would need time but that it wouldn’t be long before he was back in top form. That, though, didn’t happen.

The team struggled with their W01 while Schumacher’s own form was further complicated by the Bridgestone tyres that just didn’t suit his style. Weight-distribution with the car was