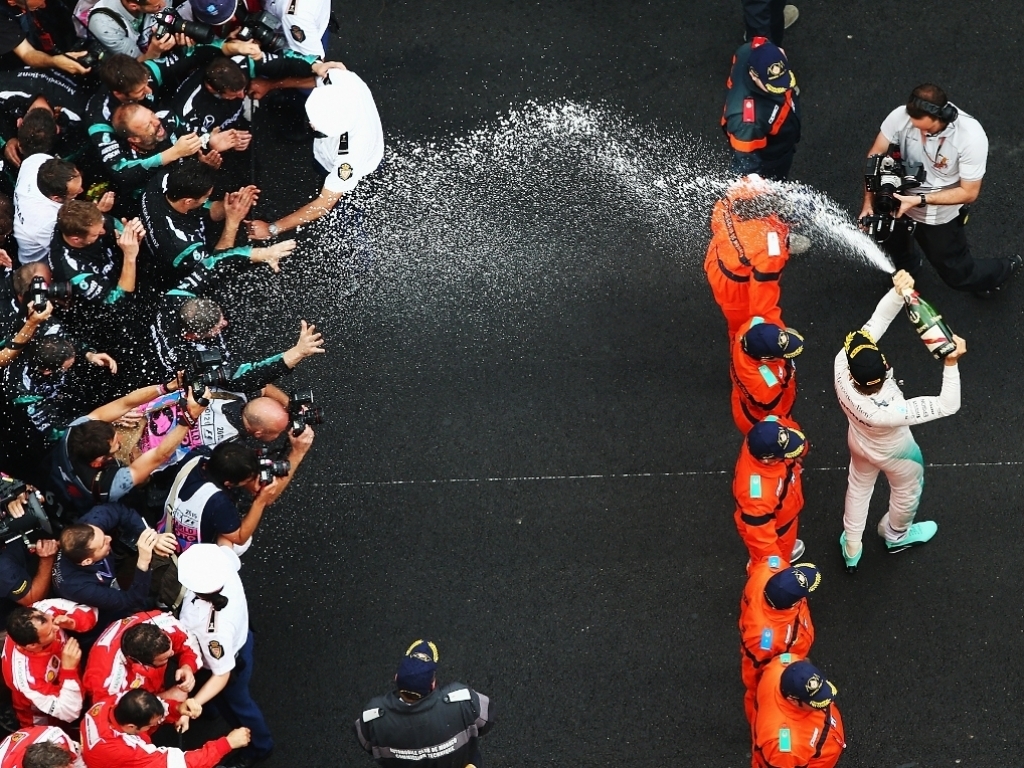 A Right Royal… Race
Although the audience included princes and princesses, the only thing royal about Mercedes' performance in Monaco on Sunday was the nature of the team's screw up when the safety car came out.

Mercedes has spent hundreds of millions of euros on its F1 and has hired the best best brains in the business in its quest for F1 dominance. Yet on the gilded streets of Monte Carlo on Sunday, Mercedes and Lewis Hamilton bumbled through the closing stages of the Monaco Grand Prix to gift victory to Nico Rosberg.

Hamilton had led the race effortlessly for 64 of 78 laps before the Brit and the team made a joint decision to pit under the safety car.

"We screwed it up for him," said Mercedes motorsport boss Toto Wolff. Wolff conceded that Mercedes got the "maths wrong", as they thought that Hamilton had enough time to pit for new rubber and still lead the race.

Hamilton admitted that he was concerned that Rosberg might have pitted for faster tyres, which prompted him to discuss pitting with the Merc pitwall.

With a mere 14 laps to go, Hamilton's worries about his rivals being on fresh tyres were unfounded. As he demonstrated when he tried to get past Vettel after the ill-fated stop, it is near impossible to overtake in Monaco.

Wolff was right to say that they got the maths wrong, though the real problem was that they did any sums at all. Pitting was, after all, a high risk, low return proposition; and a blunder unbecoming of the Championship leader and defending World Champion for whom third at Monaco is the worst result of 2015.

The cause of the error will be investigated in-house at Mercedes, but from the outside it is clear that Hamilton and the team suffered a failure of situational awareness. As with aviation disasters or industrial accidents, there is seldom one cause for the event. Indeed, psychologists offer refer to a chain of events or a sequence of factors that leads to the failure.

Applying this to Hamilton, several factors contributed to the error. The driver spent a significant portion of the early stages of the race nursing high brake temperatures, a problem resolved by rebalancing the brake bias. There was also the pressure from Rosberg – if Hamilton ran wide, at say St Devote, the German would have been back in the race. Then there was the traffic. Hamilton voiced his concern on team radio about backmarkers, at one point saying "I've lost a lot of time".

The timesheets suggest that Rosberg and co endured similar struggles scything through traffic, so Hamilton's concerns were more perceived than real. But all together it was enough to create a critical mass that led him straight down the pitlane.

Rosberg's Numbers: Two, Three, Ten
Rosberg, though, has displayed a champion-esque resolve to claw his way back after an underwhelming start to 2015. By winning in Spain a fortnight ago he has challenged his team-mate's supremacy and, on the evidence of Monaco, has done enough to rattle the two-time World Champion. In the month of May Rosberg has notched up several impressive achievements.

He has now won two races in a row for the first time in his career (Barcelona and Monaco) and has joined no lesser names than Stirling Moss and Jackie Stewart as three-time winners at the Principality (to Hamilton's sole win in 2008). More importantly for the German, he is now just 10 points behind Hamilton in the standings and seems to be gaining momentum.

Montreal is next on the calendar, the race that Rosberg, but for an MGU-K problem, would have won in 2014. Historically, however, the Canadian Grand Prix is Hamilton territory. Fans with good memories might recall that Hamilton took his debut win in Canada back in 2007.

Red Bull Rookie Racing
Toro Rosso's Max Verstappen underscored his credentials when he recorded the second quickest time in P1, a feat all the more remarkable because it was the teenager's first outing at Monaco outside of a PS4 console. His team-mate Carlos Sainz qualified eighth before his grid penalty, all of which ramped up the pressure on Daniil Kvyat.

The Russian had to defend himself after Helmut Marko warned "the established guys" to be wary of Red Bull's "inexperienced ones" last week.

Kvyat deserves credit for his response. He qualified a mere tenth behind Daniel Ricciardo and finished fourth in the race – improving on his previous best result of ninth (a position in which he has finished four times).

It is true that Kvyat was ordered to let Ricciardo by, only for the Australian to return the position on the last lap, but his – and Red Bull's – improvement bodes well for the rest of the season.

How Not to Overtake. And A Guide to Overtaking
Verstappen's high-speed shunt into Romain Grosjean going into St Devote precipitated the safety car that cost Hamilton the victory.

"That was stupid," Grosjean said on team radio about the clash.

The unrepentant Toro Rosso star hit back at Grosjean. "He clearly braked 10-15 metres earlier," said Verstappen. To the naked eye the Dutch driver seemed to have a case but the stewards agreed with the Lotus driver and handed the youngster a five-place grid penalty for the Canadian Grand Prix for causing the collision.

Before the incident Verstappen had done more than most to enliven a dull grand prix. On lap 56 he leaned on his super-soft rubber to shadow Vettel, who had lapped him, and used the Ferrari and the pace from the tyres to execute two opportunistic overtaking moves.

First he slipped past Sainz who had moved aside for the Ferrari and then, at Mirebeau Bas, slid up the inside to move ahead of Valtteri Bottas' Williams. Overtaking in Monaco may not be impossible, as Hamilton said, but it certainly takes something special.

Raikkonen Riddle, Vexing Vettel
The eight points that Kimi Raikkonen collected in Monaco, the sixth race of 2015, takes him to 60 points for the season, which is five more than he scored over the entire 2014 campaign.

Similarly, Ferrari's current haul of 158 points this season is equivalent to nearly 75 per cent of what they scored in 20 grands prix last year. Ferrari's revival has been striking, but also peculiar, as epitomised in Monte Carlo.

Vettel had a low-key weekend. He qualified third again and, before  Hamilton's gaffe, seemed set to pick up his fourth third-place of the season. Ferrari tried the undercut to get ahead of Rosberg and failed, again highlighting that Mercedes still has the Scuderia covered on pure pace in normal conditions.

Although Vettel has five podiums in six races, at which point does he begin to show his frustration at the Italian team's inability to really take it to the Silver Arrows? His comment regarding low tyre temps while behind the safety car, "this is like swimming with weights on my legs and feet", was one of the best of the day, but may also offer insight into what it feels like to perpetually see the rear wing of a Mercedes.

Moreover, he allowed Ricciardo to bully him aside in the closing stages, an episode in which the Finn dropped from fifth to sixth and which provoked him into accusing the ever-smiling Aussie of "not being very nice".

Ricciardo, one of the nicest guys off the track, showed once again that he is ruthless on the track. Currently 38 points adrift of his team-mate, Raikkonen has become the resident F1 grump; equally irritable on track as he is off it.

Points for Button, But None for Alonso
Jenson Button was bullish about McLaren's chances all weekend and he was right to be confident about the team breaking its points-scoring duck.

Fernando Alonso was downbeat in comparison (the race is over on Saturdays, he said). The two-time Monaco winner has struggled for form at the race in recent seasons – a strange trend given the onus on driver ability and bravery on the street circuit. In 2014 he finished an anonymous fourth while in 2013 he was bossed by Sergio Perez and finally reached the chequered flag in an underwhelming seventh.

It may be premature to talk of the Spaniard's declining dexterity, but for all of his complaints about receiving a penalty for the incident on lap 1, the side swipe he gave the luckless Nico Hulkenberg was more Roland Garros than Monaco Grand Prix.