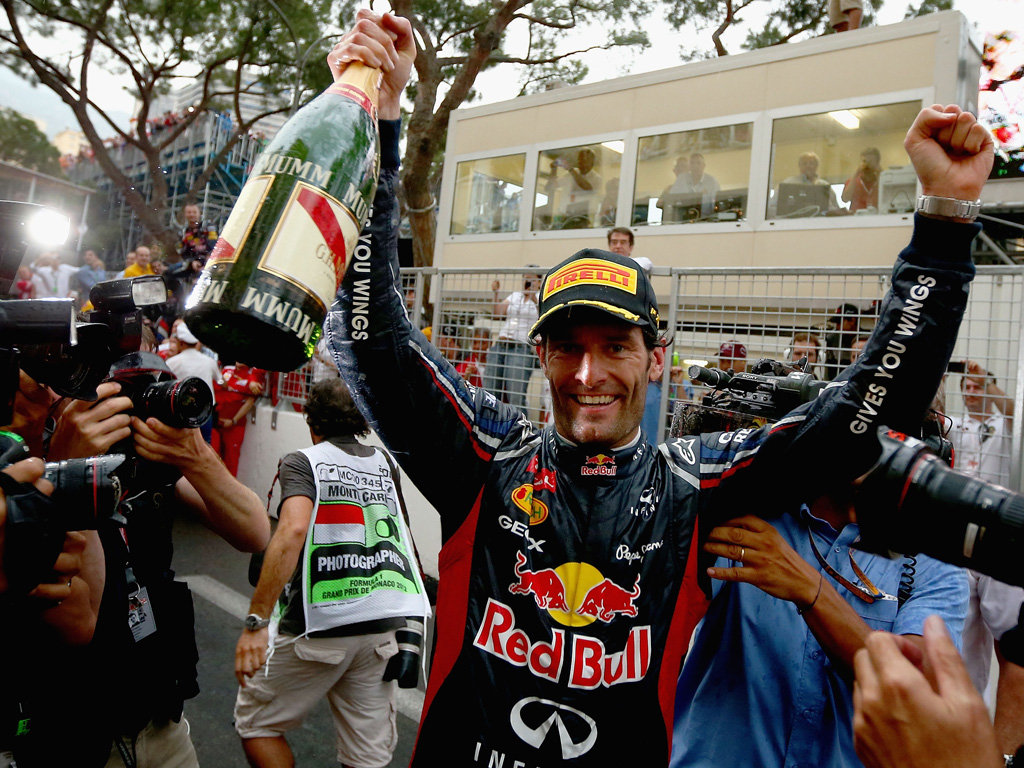 King of Monaco for the day, Mark Webber delivered the dream 6/6 statistic while Felipe bounced back in style…

It was nerve-wrackingly processional, but at least we got six out of six.

Star of the RaceMark Webber, Red Bull, 1st
As Mark said tellingly after the race, “this is the weakest car we’ve won with.” Red Bull’s third victory in a row was its closest, and for some, its most welcome. Brazil last year was a bit of a gimme for Mark, this win he sweated out. “Emotionally its worth double but the points are still the same.” Montreal can’t come fast enough.

Overtaking Move of the Race
Back to the bad old days of Monaco. On the weekend of the Eurovision Song Contest it was nil pointesfor our friends from Monte Carlo. To show how dire this race was in terms of giving us overtaking, Sergio Perez was able to record the fastest lap by a mile, a 1:17.296 compared to the front runners’ best of 1:18s, and still struggled to pass a Marussia going into the Turn 14 chicane.

Winners
Nico Rosberg, Mercedes, 2nd
Nico was faster than Webbo in the race but (as with all things in Monaco) position is everything. He was putting in some fast laps when he was called into the pits earlier than most expected. Presumably the team thought they might be able to jump Red Bull if they got the undercut and it was certainly a great space that Kimi Raikkonen had provided for the top six runners to emerge into. It didn’t work out. However ‘Fastest Car Doesn’t Win Monaco’ isn’t that much of a shocking headline – ask the driver steward.

Fernando Alonso, Ferrari, 3rd
He’s a crafty beggar that Fernando. For 16 laps he sold Lewis Hamilton the dummy that he was sliding away from the lead, dropping to 4.2 seconds behind the Brit on Lap 16, one of the biggest defecits at that stage of the race. He was simply running in clear air and keeping his tyres ready for the big sprint. We should have known something was up because Felipe Massa was so close. Then on Lap 17 the plan began to be revealed when he suddenly set the fastest middle sector of anyone. Previously he’d lost 0.5 and 0.6 to Lewis in that sector (all without backmarkers) so the car wasn’t lacking. Then he closed the gap to 3.6, 2.9 with a quick burst of fastest laps. On Lap 28 he was just 0.1 behind after which Lewis pitted. Luckily for Fernando there were no Marussias around to spoil this plan. A great tactical move from Ferrari.

Sebastian Vettel, Red Bull Racing, 4th
Sebastian Vettel was a lucky lucky boy last season. He didn’t need it to win the Championship, that was his by dint of sheer brilliance, but whenever things could go right for him in 2011 they did. He got more of the same in Monaco with a gift of sixth place following Romain Grosjean’s careless start. Staring at the revolving Lotus the pitlane escape route beckoned and he took it. Had Grosjean not swerved violently into Michael Schumacher, Seb would have been behind Raikkonen, Grosjean and Schumacher. What’s more, he would have lost time behind Kimi as the Finn’s tyres faded. Because we know FOR CERTAIN that he wouldn’t have been able to get past him. Thus his first sight of an open road would have been on Lap 29, the gap in front of Kimi into which Messrs Webber to Schumacher would have already re-emerged. He was probably staring at 8th or 9th if Romain had not become the runaway leader of Planet-F1’s bash.log (coming back next week – thanks to everyone who contributed to the first one)

Lewis Hamilton, McLaren, 5th
To give you an idea of how boring the race was, someone on the pitwall started acting like a teenager who didn’t want to sit through double Maths and started flicking numbers off their pitboard at Lewis as he came past. Hamilton complained about his poor launch, but Mark’s timing away from the line was great (for once) and Rosberg too, so there wasn’t much of an opportunity to steal a place into Ste Devote.

Felipe Massa, Ferrari, 6th
Felipe had wanted this to be his comeback performance and there was cause for great optimism in Monaco. Rob Smedley thought he could maybe have qualified higher than he did, but at least he was back in Q3 again, not struggling to get into Q2. It was noticeable that when it got slippy with more rain on track towards the end of the race that he fell off the back of Lewis Hamilton, but otherwise a great drive. And good to see.

Force India, 7th and 8th
It was worth Vijay bringing the yacht then – that’ll keep Paul and Nico in premium Indian lager for a while.

Kimi Raikkonen, 9th
We’re certain he’ll have been disappointed, cven if we didn’t get to hear the interview.

Bruno Senna, Williams, 10th
A fitting reward for the Herculean effort put in by Williams, and all the other teams who loaned them equipment up and down the pilane.