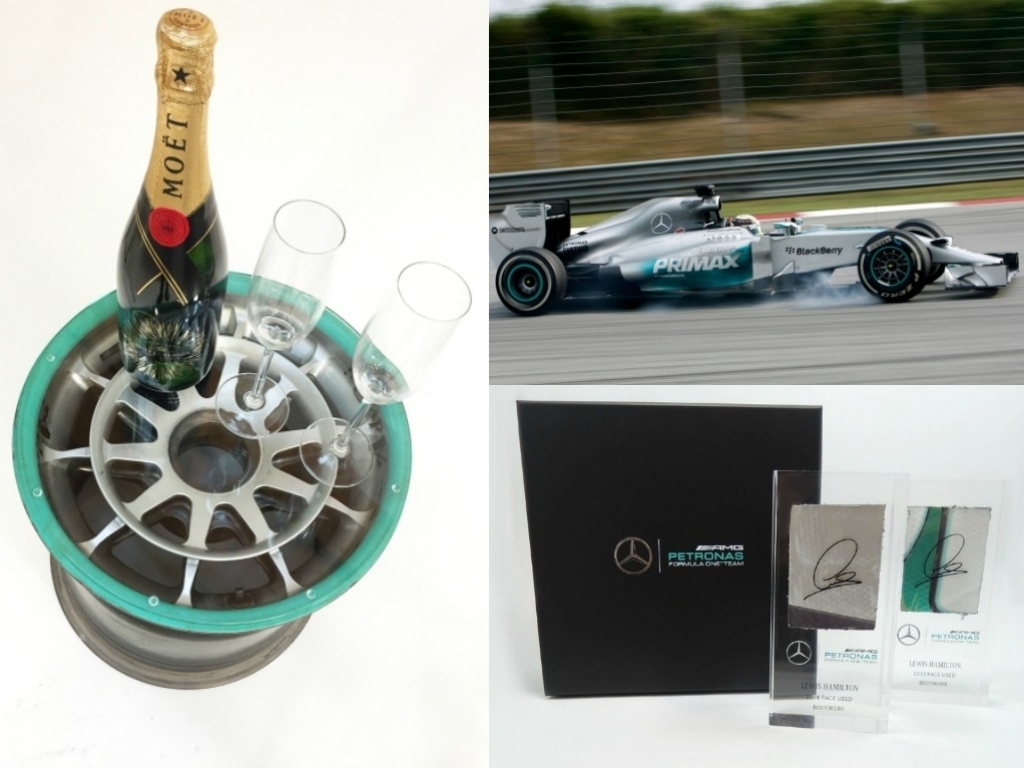 Just five more weekends to endure without F1 and just a few days until the official unveiling of the first of the new 2017 cars!

Our partners at Memento Exclusives have been busy transforming Formula One heritage into new ultimate memorabilia for you to own for the 2017 season. You can purchase all of these new pieces in the PlanetF1 Shop. Each race-used component is supplied officially by the team itself and is re-engineered under an official licence agreement.

Here are our top 5 picks of what’s new in the PlanetF1 Shop!

1. 2014 MERCEDES AMG PETRONAS Wheel Rim Tables
A very limited delivery of these wheel rims came in time for Christmas, and pitted in record time! The latest delivery of championship-winning 2014 Lewis Hamilton and Nico Rosberg wheel rim tables has just arrived back in stock – re-engineered as drinks tables for your home. Each one wears its race markings like a badge of honour.

2. Sahara Force India Nose Cone Table
Encased in a crystal clear acrylic table, the polished VJM06 Nose Cone is sure to turn heads. The race-used bodywork is bolted to its bespoke acrylic frame to secure it in place and the table features protective feet to prevent any scratching to your floor.

3. Lewis Hamilton 2014 Bodywork in Acrylic
You can now purchase a piece of Lewis Hamilton’s championship-winning 2014 sidepod – encapsulated in acrylic! From the front, you see the beautiful sheen of the MERCEDES AMG PETRONAS livery, and from the back you can study the intricate honeycomb structure of the carbon fibre.

4. Sahara Force India Wall-Mounted Sidepod
Back in the shop are wall-mounted car parts in their original race-used condition. Select custom-made brackets with your order to mount a Sidepod, Front Wing and more to your wall! Just-in is the sidepod from the Sahara Force India VJM08