Home Uncategorized Not Afraid To Be The Big Bad Wolff 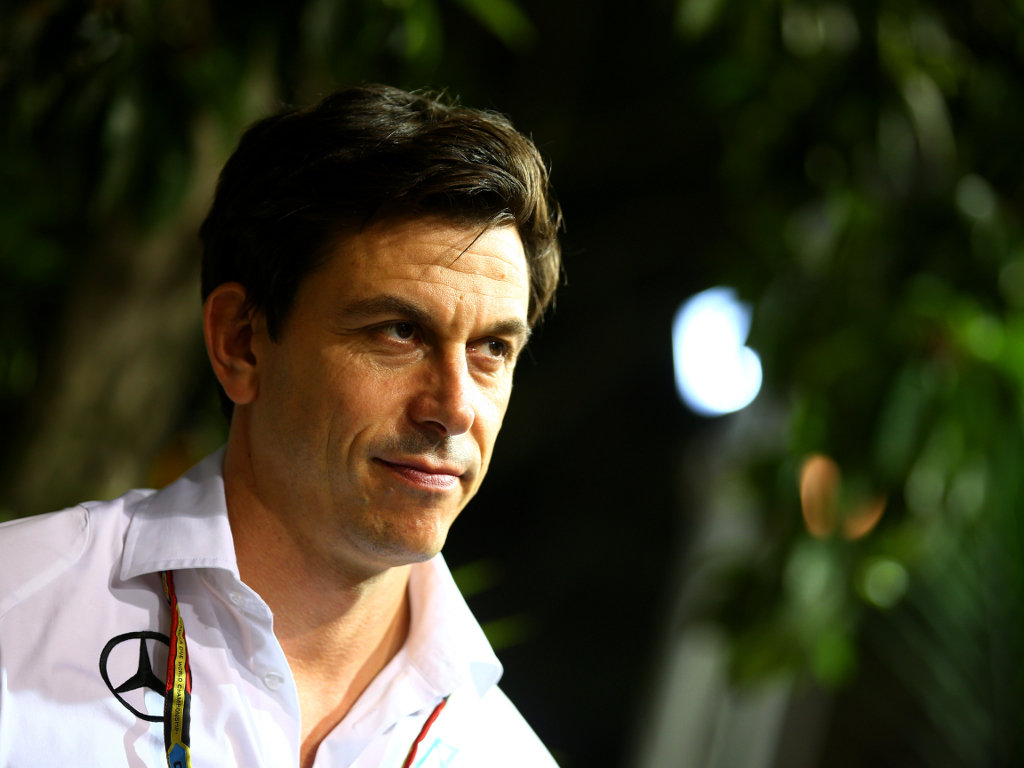 With the F1 constructors’ title safely locked away in the trophy cabinet at Mercedes’ Brackley HQ, the Silver Arrows team are coming under pressure to give up their engine advantage.
It’s been apparent from the early days of the championship that the winner of the new 1.6 litre hybrid engine-building battle has been the Brixworth Flyer. But Mercedes, Renault and Ferrari have all had stellar seasons with their new engine units if you compare the reality to the dire pre-season predictions and what the old V8-loving dinosaurs had prophesized.
The new engine formula was supposedly going to be a disaster for F1 – ‘what happens if there are no runners at the end of the opening race?’ was one scenario put forward by the sceptics. As we’ve seen, that didn’t happen. And the retirements from each race have broadly been on a par with most seasons of late – when we were using comfortable, old-school, old tech.
The cost of the new engines has been a big burden on the teams, though, and such is the financial pressure on Marussia, Caterham and Sauber, that Bernie Ecclestone is hovering in the wings with his 3-car rule. That is, the rule that teams will have to supply three cars if the grid falls to under 20 cars.
That’s not a Bernie fantasy project – like his vision of making many more races double points, or having the World Champion declared on who has the most gold medals (Lewis Hamilton would have been World Champion since Sochi if that were the case) – that is already written in a contract.
The whole process of innovation and change has been an expensive one. So what F1 doesn’t need right now is an expensive engine-building battle. Ferrari are on the slide. They’ve lost Stefano Domenicali, Luca Montezemolo and are about to lose Fernando Alonso. The new men in charge Sergio Marchionne is leaning heavily on golden boy Marco Mattiacci and he is leaning heavily on the panic button and Bernie Ecclestone.
They tried to sign Adrian Newey. They couldn’t. They wanted to retain Alonso. They couldn’t. They now want to re-write the agreed engine rules while portraying the last four or five years as a bit of a wilderness for Ferrari.
They are both new to F1, so let’s forgive them, but save for two unlikely results, Ferrari could have won the driver’s title twice in the last four years. At the final race of 2010 in Abu Dhabi, the team were let down by one strategic error, to cover Mark Webber’s pit-stop instead of worrying about Sebastian Vettel. Then Alonso was delayed by a particularly stubborn Vitaly Petrov and the Championship went away from him. But it was an outcome no-one seriously expected.
Then in Brazil in 2012, Sebastian Vettel was clonked on the opening lap of the Brazilian GP by Bruno Senna, ran a race with extensive bodywork damage and limped across the line to take the title against the odds. Add that to the snatched-away-from-him-on-the-last-corner 2008 title for Felipe Massa and you would have had Ferrari World Champions in 2007, 2008, 2010 and 2012. That looks pretty good from where McLaren are sitting.
Ferrari’s problems this year have revolved around their engine, and the fact that the technology was frozen at the beginning of the year. They have spent all of 2014 improving it ready for the start of the 2015 season, when the new improved units can be brought in ahead of the 2015 lock-down. They have the cash to evolve their engine on a regular basis, the rules say they can’t.
Mercedes’ Toto Wolff has laughed off suggestions from the Scuderia that in-season testing and an un-freeze of engines will not lead to a dramatic increase in expenditure.
“We are developing an engine and power unit until the end of the year, and then it is being manufactured, frozen and then delivered to customers at the same time. If you have a development cycle in-season, and you bring a new spec in season for the end of June/end of July then the whole development process ramps up. Because the most expensive bit is running parts on the dyno, is happening twice a year.”
And here’s the funny bit.

“I don’t know how they (Ferrari) make that calculation,” said Toto, meaning the bit where Ferrari said a mid-season unfreeze wouldn’t cost extra, “but we probably need to send them a calculator. There is no way you are not spending more. You are spending considerably more and every other argument is just because they don’t think they are where they should be.”
Ron Dennis has dubbed F1 as ‘The Piranha Club’ and the first rule of Piranha Club is that you don’t give up any advantage unless you have to. Red Bull’s Christian Horner and Marcio Mattiacci are crying crocodile tears when they say that the engine freeze should be dropped’ for the wider interest of the sport’.
Many view Horner as the first to stab ‘the wider interest of F1’ and the team’s association in the back by doing his own financial deal with Bernie Ecclestone when the teams were supposedly negotiating for more income as a block. Not wishing to be left out, or surrender its unique financial payout from Bernie, Luca Montezemolo joined him (took Sauber with him) and FOTA was effectively finished.
‘The wider interest of F1’ is only quoted by top teams when they have a disadvantage.
Toto says he is not going to be deflected by doing the best job on the grid and shrugs off criticism that portrays him as the bad boy: “Probably that is the price you have to pay when you are winning. You have seen it in the past with Red Bull, they have transitioned from a cool little team and were seen as something different. You get the momentum against you and that [criticism] is what happens.”
Andrew Davies