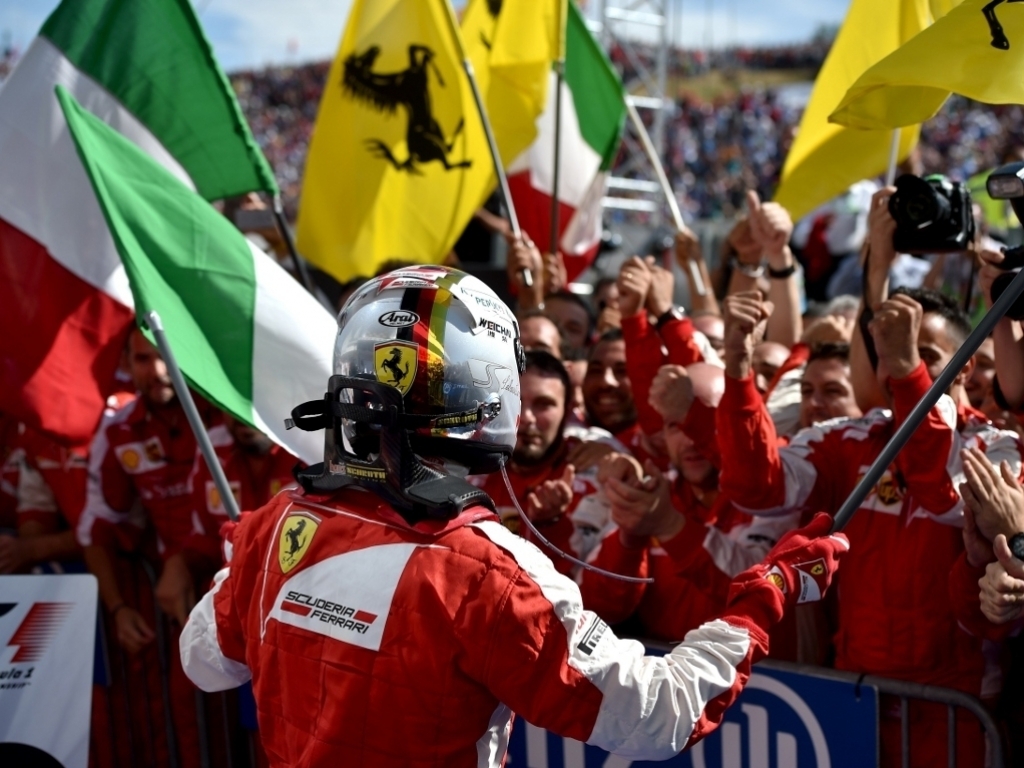 A celebration of F1 at its finest, the finger is back while the Iceman was back in the garage and more in the PF1 Conclusions from Hungary.

This one is for Jules
With Jules Bianchi's death casting a pall over the Hungaroring, a statistic that passed largely unnoticed is that Vettel scored his 41st race win – equalling Ayrton Senna's number of victories.

Senna, who lost his life at Tamburello in 1994, was the last F1 fatality before Bianchi.
It was fitting, then, that Vettel dedicated his victory to Bianchi.

"This victory is for Jules. We know it has been an incredibly tough week, and for all of us very difficult, so this one is for him," said Vettel.

A celebration of F1 at its finest
Although an undertone of mourning accompanied proceedings, the Hungaroring hosted a classic race that had a bit of everything. Except rain.

Given the barrage of criticism that F1 constantly faces from sceptical quarters, the race in Hungary, in which the top four were separated by just 3.8 seconds with a handful of laps to go, delivered a stunning riposte to the critics who, after the British grand Prix, charged that there can be no exciting racing without rain.

The finger is back
As chaos unfolded throughout the field – from the battle for the podium through the midfield – Vettel cruised around the Hungaroring as if he were sailing on tranquil waters.

The German's second race win over the season was built on a swift start, during which he passed both the Mercedes. From then on it was a familiar Seb Show. Staying calm under pressure and banging in quick, yet consistent, lap times when it mattered.

The four-time champion is still in the running for the title and James Allison declared with confidence that Ferrari had the pace to win regardless of the variables, but the more pragmatic-minded tifosi will be content to pick up a second win of the season after the ignominy of 2014.

While The Iceman was back…in the garage
The safety car and the Ferrari MGUK conspired against Kimi Raikkonen, who seemed set to collect a much-needed podium.

Raikkonen's eventual retirement was, of course, a setback for a driver under pressure but Ferrari will be reflecting on a missed opportunity to secure a one-two finish, a result they last achieved at the German Grand Prix almost five years ago to the day.

Mercedes feeling the heat?
Both before and after Nico Hulkenberg's shunt brought out the safety car, Nico Rosberg and Lewis Hamilton lacked the raw pace to challenge Vettel.

In Vettel and Ferrari's first win of the campaign, the Prancing Horse beat the Silver Arrows on pace at the Malaysian Grand Prix, where the track temperature reached 60°C.

Track temp at the Hungaroring hovered just under 50°C and again, at a warmer race, Ferrari were quicker than the Mercs. Meanwhile, at the British Grand Prix, where the track temp was a 28°C, Ferrari struggled relative to the Mercs and the Williams cars.

Vettel and co will no doubt be targeting the warmer climes of Singapore and Abu Dhabi as two more potential race wins.

But the weather doesn't explain it all
Lewis Hamilton and Nico Rosberg have gone backwards at the starts at the last two races. With manual starts set to return from the next grand prix, in Belgium in a month's time, the Merc pair will be under far more individual pressure to get off the line in a manner befitting the World Champion team.

As for Hamilton, he managed to find trouble throughout the grand prix. His complaints about Rosberg's manoeuver after the start smacked of desperation from a man coming to terms with his own clumsiness. The Brit's Sunday was further blighted by a lap 49 clash with Daniel Ricciardo and a drive-through penalty.

"I'm sorry sorry guys. I'm so sorry," a contrite Hamilton said on team radio. All things considered, Hamilton is lucky to go into the summer break with a 21-point lead over his team-mate.

Ricci the racer…and Rosberg?
Daniel Ricciardo showed admirable bravado during his drive to third – surviving altercations with both Mercs and serious bodywork damage. The Red Bull driver starred in last season's Hungarian Grand Prix and did all he could to repeat the feat, though his attempt to pass Rosberg on lap 64 cost him a shot at a fourth F1 win.

"I left everything on the track," said Ricciardo. "Whether some competitors like it or not, that's how I like to do it and how I'll always do it.

The Aussie's feisty racing certainly caught the eye again, while Rosberg's credentials as a wheel-to-wheel racer will once again be scrutinised as again it seems likely to undermine his title aspirations.

The breakthrough boys
Despite Ricciardo's proclamations about his "inspired" drive, the record books will show that he was beaten to the flag by his team-mate Daniil Kvyat, who become the youngest ever driver to stand on the podium.

Max Verstappen, the boy – er, man – putting Kvyat under pressure for the second Red Bull seat, finished fourth to notch up his best ever result. The result is also Toro Rosso's best finish since a certain Seb Vettel finished fourth at the 2008 Brazilian Grand Prix.

McLaren finally take a step forward
Fernando Alonso must have wondered if he were a midwife on Saturday as he spent a good portion of qualifying directing marshals to push his stricken McLaren Honda.

Just 24 hours later, the Spaniard crossed the finish line in fifth after capitalising on the woes experienced by Mercedes, Williams, Lotus, and Force India.

"Fifth is unbelievable, a little impressive for us because in this moment we are not super competitive," said Alonso.

The worst performance of all time?
Lotus driver Pastor Maldonado was sanctioned by the stewards for colliding with Sergio Perez, for speeding in the pitlane, and for overtaking under the safety car.

To defend Maldonado, the 2012 Spanish Grand Prix winner, has become an exercise in futility.

Yet even with his petrodollars, Lotus struggled to pay Pirelli on time ahead of this weekend's race. And with the oil price declining as quickly as the Venezuelan's stock, his F1 career seems to be heading one way…