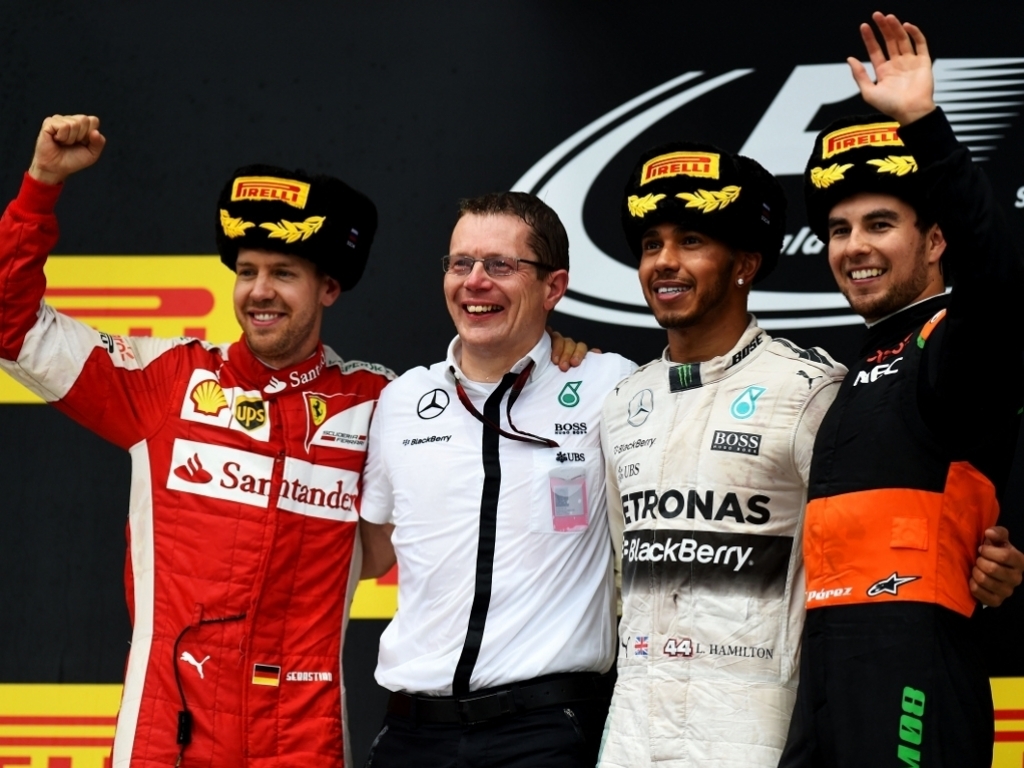 Sergio Perez gets the rub of the green, reality check for Nico Rosberg and more in PF1’s Conclusions From Russia.

The Rub Of The Green
Sergio Perez seemed set to secure an unlikely podium until the final lap of the Russian Grand Prix when his Pirellis “hit the cliff”. Despite putting in the drive of the day, both Valtteri Bottas and Kimi Raikkonen swept past the floundering Force India.

Although unlucky, fifth place would still have been a decent return for the Mexican, who made the most of an alternative strategy that involved a long stint after stopping under a Safety Car period.

Instead Raikkonen, again outclassed by his team-mate Sebastian Vettel and on the cusp of being beaten by the man slated to replace him at Ferrari, made an ill-conceived lunge up the inside of Bottas’ Williams.

The impact sent Bottas into the barriers and out of the race. “What the f*** did he do,” an indignant Bottas said. Raikkonen’s damaged Ferrari was easily passed by Perez and others.

Just like that Perez was back on the podium. He described the result as “the best moment of my career” after limping home with “no rubber left at all”.

And so Perez claimed Force India’s first podium of the year, his first since Bahrain in 2014, and the fifth top-three finish of his career.

As far as midfield drivers go, few, if any, of recent years are as quick to capitalise on an opportunity as Perez.

Raikkonen, meanwhile, was penalised and dropped to eighth in the classification as Vettel stormed to yet another podium and into second in the Championship standings.

Rosberg Reality Check
In lay terms Nico Rosberg’s retirement at Sochi is the equivalent of your computer crashing while writing a report and the file being corrupted… and your colleague then finishing the report and winning all the plaudits from the boss.

While in a normal job you might go home and complain about this to your spouse, Rosberg bemoaned his poor fortune to the international media.

“Like this I’ll never win the Championship if it continues like that; breaking things on a normal day when I should have won,” said Rosberg.

The Rosberg DNF coupled with Lewis Hamilton’s victory, as many headlines have noted, has moved the latter to the brink of becoming Britain’s second three-time World Champion.

And so long as Hamilton is his stablemate, the German is likely to face Mark Webber syndrome and, as his comments after the Russian Grand Prix suggest, he is confronting this reality.

While Rosberg did seem to have the measure of Hamilton at Sochi, he has struggled to match his team-mate consistently through the season. With that in mind, victory was far from guaranteed, not least because of Hamilton’s prowess in wheel-to-wheel combat.

Even if Rosberg had won, the 25-point haul would have done little more than delay Hamilton’s seemingly certain coronation, which will now likely come at one of his favourite races: the US Grand Prix in Texas.

Putting The ‘S’ into VSC… And More
The Lap 1 incident between Hulkenberg and Marcus Ericsson prompted the swift deployment of the Virtual Safety Car before the traditional Safety Car was sent out on track.

Introduced after Jules Bianchi’s tragic accident in Japan in 2014, the VSC is used to regulate the speed of cars through sectors while the race director assesses the aftermath of an accident or while debris are cleared or recovered from track.

However, the implementation of the VSC system in Russia on the opening lap almost resulted in Hamilton rear-ending Rosberg, and Raikkonen almost clipping Rosberg.

In general the safety procedures at Sochi also warrant review. Both Vettel and Felipe Massa criticised track safety after Carlos Sainz’s massive shunt in practice, while the manner in which marshals taped up damaged barriers after Romain Grosjean’s crash in the race hardly inspires confidence.

Then there was “the brave Russian”, in Vettel’s words, who ran on to the circuit to collect a piece of debris with the Ferrari approaching at high velocity.

Showcasing Sainz
Max Verstappen is just 17 and has had a stellar debut season. It’s thus easy to overlook Carlos Sainz’s rookie year; after all he is four whole years Max’s senior in age and has scored far fewer points.

Before suffering a brake failure (and recklessly scattering his damage rear wing across the track), Sainz had enjoyed a remarkable race.

The Spaniard went from FP3, to hospital, to the back of the grid, to P7, as Martin Brundle said in the commentary.

This brave effort was brought to a premature end but Sainz showed well and was once again unlucky to miss out on the type of points finish that his team-mate has achieved in 2015.

Nasr Finds Form
Felipe Nasr’s fifth-place finish on debut in Australia while driving a Sauber remains one of the best pound-for-pound results of the season.

Since then the Brazilian has endured an indifferent season, only snapping a six-race streak without scoring points by finishing 10th in last month’s Singapore Grand Prix.

He followed that up with a solid sixth in Russia to underscore his credentials as another to watch in the future.