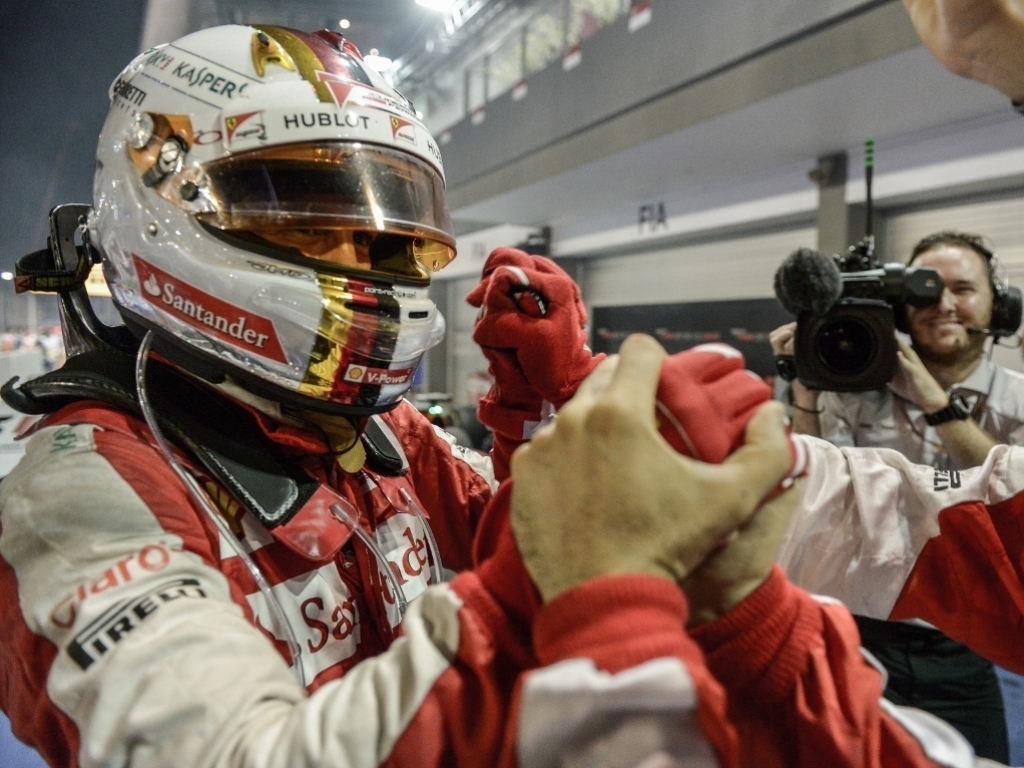 Vettel’s Lost None Of His Magic
A driver who can win four World titles in succession definitely has something special and that was evident under the lights at the Marina Bay circuit. Sebastian Vettel played a tactical game against his rivals as he raced to his third win of this season and his fourth in Singapore. On a circuit where every inch counts and one too close to the barriers can cost you dearly, the German turned back the clock to put in a flawless display.

Two (Maybe Even Three)- Team Race In 2016
Apparently Formula 1’s silly season is not reserved just for drivers as now that the Ferrari conundrum has been resolved, it is Red Bull’s engines that are dominating the headlines.

This weekend it was finally confirmed that Red Bull would be splitting with Renault at the end of this season while Mercedes power is out of reach after the head chap said no. So now it is Ferrari who are at the forefront of Red Bull’s plans. But only for two years as they could then link up with Volkswagen – potentially under the Audi brand – who may or may not actually be buying the team.

After this weekend’s display from Ferrari, opting for Italian muscle could be a great move for Red Bull. There is no doubting that Ferrari have made massive improvements with their recent engine upgrades so much so that reports claim it allowed them to turn the wick up in Q3 in Singapore, something they could not do prior.

With two good teams using Ferrari power that bodes well for Formula 1 and finally, we’ll get to see what an Adrian Newey designed (or at least influenced) car can do with Ferrari power.

Mercedes Are Not Infallible
Toto Wolff insists Mercedes just got the set-up wrong in Singapore but on a weekend where Pirelli’s tyre pressure increase was adhered to by all – we assume – speculation that that was the real problem continues to grow.

Speed aside, though, the W06 that has up until now appeared bulletproof has shown signs of niggling reliability gremlins of late. While a coolant leak cost Nico Rosberg at Monza, a clamp was the undoing of Lewis Hamilton in Singapore. His first retirement of this season has been blamed on a clamp that failed resulting in a loss of boost pressure. Sometimes it really is the simple things.

Youthful Exuberance Counts
Max Verstappen’s day began where many rivals’ would have ended, a lap down. Failing to leave the grid, his STR10 was pushed back into the pits by the marshals where Toro Rosso fired it up and Max got going, albeit a lap down.

He used the first Safety Car to un-lap himself and from there charged up into the top ten. It was an impressive display and the perfect advert for never giving up.

His efforts, though, were then almost undone by his own team as Toro Rosso ordered him to hand over P8 to his team-mate Carlos Sainz. Max responded: “No!”

Toro Rosso have subsequently backtracked on that with Franz Tost conceding that if Carlos “wants to swap positions, he needs to be closer.”

Blaming Maldonado Has Become A Habit
Even though he was in front of Jenson Button and Button drove into the rear of his E23, Pastor Maldonado still got the blame. Sorry Jense but this one is on you.

Yes Pastor is often responsible and yes his driving can be erratic. But any insurance company will tell you that if you rear-end someone, it is your fault.

If The Car Is Not Reliable, Even Slow Tracks Won’t Help
McLaren believed Singapore would negate their engine losses but with their car that unreliable it didn’t matter.

Honda have come in for a lot of stick for McLaren’s troubles with many predicting that the team could secure a good result in Singapore given that engine power counts for little. That may be true but apparently reliability counts for a lot.

Both Fernando Alonso and Jenson Button had been inside the top ten, thanks to that Honda power, when they retired on Sunday night. And that was thanks to “gearbox problems.”

Arrivabene Better Start Stretching
Ahead of his first season as Ferrari team boss, Maurizio Arrivabene predicted that the Scuderia would take two race wins before adding that “three would be perfect.”

He went a step further, though, stated that for “four [wins] I will run without shoes 100km up the hill to Maranello!”

With Vettel having claimed the team’s third in Singapore on Sunday and with six races still to be held this season, the Italian may yet take several steps further – literally.

Poor Lotus/Renault For 2016…
They lose Mercedes engines and swap to Renault power and now they lose Grosjean but keep Pastor.