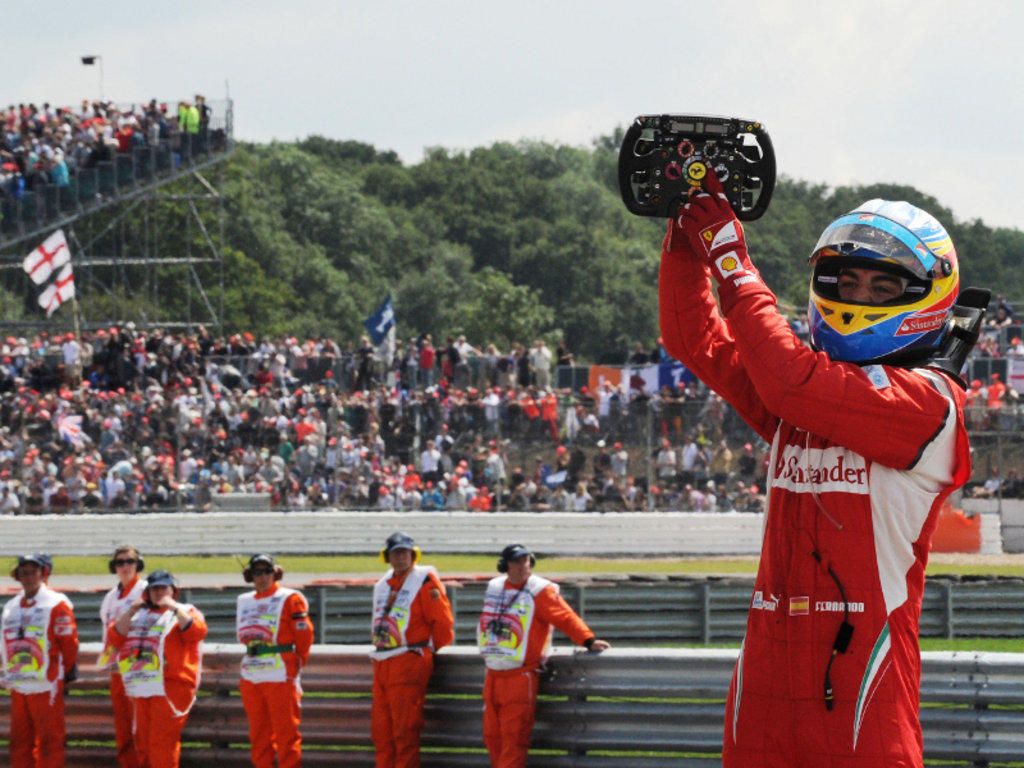 Say all you want about other teams such as Red Bull and McLaren making mistakes, there’s no taking away from Fernando Alonso’s win…

Say all you want about other teams such as Red Bull and McLaren making mistakes, there’s no taking away from Fernando Alonso’s win…

Red Bull Clanger Or Not, Ferrari Had The Pace To Win
The overriding emotion at Ferrari in the wake of Fernando Alonso’s fine victory at Silverstone will have been relief rather than pleasure. Such is the way of life in Italy and the pressurised domestic strife the country’s national F1 team is forced to live with. Congratulations never last long – if at all – because Ferrari are supposed to win. The headlined summary for the reaction of Ferrari president Luca di Montezemolo – ‘At Last’ – will have spoken for most Italians. The big story is always not when Ferrari win but when they are not winning.

Yet once the relief has been gulped down along with the champagne, even the team itself might start to expect plenty more victories to come. They were seriously fast at Silverstone – much, much quicker than McLaren, and, when it really mattered, much quicker than Red Bull.

It wasn’t obvious at first because of the British summer’s wet ingredient, but when the track dried out and all the moisture evaporated, Ferrari were just mighty.

The fun for the watching public was that the rain meant Alonso had to claim his victory the long way. With a little over a third of the race run, Ferrari were only the third-fastest car on track, with the Red Bulls a speck on the horizon and Lewis Hamilton zipping his McLaren around Alonso’s Ferrari to loud acclaim on lap 15.

Yet at that stage the track was still damp. Once it reached full dry status, Alonso was untouchable. Though it was a shame that Sebastian Vettel’s calamitous pit-stop donated the lead of the race to Alonso without the Spaniard having to grab it for himself, that donation should not distract from the speed advantage the Spaniard had just unfurled to re-pass Hamilton and close within five seconds of Vettel before his wheel-nut calamity. All of a sudden, the Ferrari was in a league of its absolute own. For lap after lap, all the way into double figures, Alonso was a second faster than Hamilton and the boxed-up Vettel. No doubt the Red Bull was being slowed by the McLaren, but maybe not substantially – after undercutting Hamilton at his third stop, Vettel made no inroads into the lead Alonso had built up. Nobody can know for certain (and we’ll have a quick discussion about the matter in a moment), but the numbers suggest that even without the pit-stop blunder, Alonso’s pace would have trumped Vettel.

By hook or by crook, because of their own upgrades or this tedious diffuser business, Ferrari are back with a vengeance. Both Championships are probably still out of their reach – even in defeat, Vettel extended his lead of the Drivers’ Championship – but at least we have a chase. And in Italy, the F1 world is back in its right order.

Red Bull’s Hot Vulnerability Is Obvious In Hindsight
Another interesting development – and one which might have a huge bearing on the destiny of the remaining chunk of the season – was the curious performance of Vettel’s tyres.

Noted in race commentary, Sebastian repeatedly left the dry line that emerged to cool his tyres by deliberately running them through the few remaining puddles still on the circuit. Hitherto this season, Vettel has, with decent justification, earned credit for being kind on his tyres, but what we learnt on Sunday is that keeping your tyres in trim is easy when you’re out in front and enjoying the clean air of open road. Yet as soon as Vettel was baulked by Hamilton, he began to struggle and lose performance. His tyres over-heated and he shed them within ten laps, meaning he had to finish on a long stint which in turn resulted in the World Champion being reeled in by his team-mate to controversial effect. In short, he was severely weakened.

Such has been the regularity of his lights-to-flag dominance this season, Vettel has only very rarely suffered the inconvenience of being stuck in another car’s hot air this season, so it was a bit of a shock see his previously-near-perfect Red Bull suffering so adversely. Then again, there was a clue obvious in hindsight. The reason why Vettel is so dominant in qualifying and so fast out of the blocks at the start of races is because the Red Bull is so adept at putting heat into it tyres compared to its rivals. So perhaps we should have long suspected it would be especially vulnerable to overheating when stuck in the hot air of another.