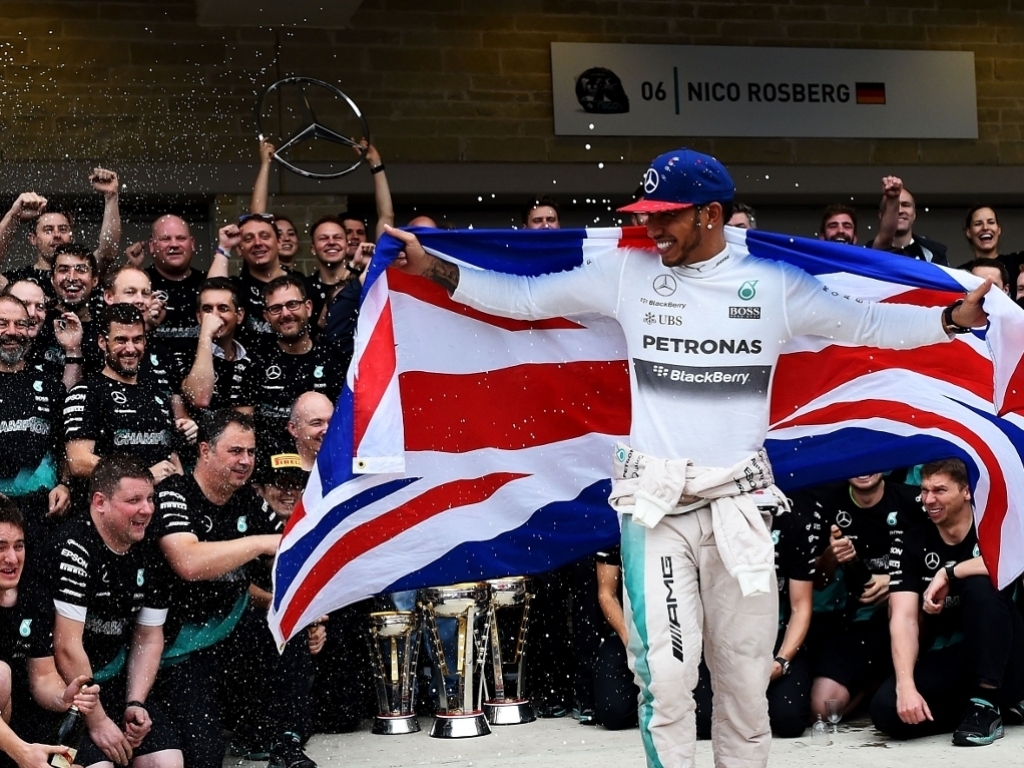 All hail King Lewis the Third
The weather washed out practice and part of qualifying but there was no damp squib in Texas as Lewis Hamilton conquered the greasy conditions and pressure while avoiding the carnage through the field to win his 43rd grand prix.

What mattered more was that he beat his team-mate Nico Rosberg, who in turn finished ahead of Ferrari’s Sebastian Vettel, which leaves Hamilton with an unassailable lead in the Championship.

The big talking point, besides the various safety cars, was Hamilton’s aggressive start. There was contact between him and Rosberg into T1 and the German  bristled after the race, saying Hamilton “drove into me, and that’s definitely one step too far”.

While many may sympathise with the German, that incident is likely to be no more than a footnote in history. Rosberg’s error late in the race, where he squirmed and traction and lost momentum, was just as much to blame for his finishing second.

If anything, the 2015 US Grand Prix is a microcosm of the power balance at Mercedes since 2013, when Hamilton first joined the team.

The weight of Hamilton’s superiority since then, in true statistical terms, is significant. He has won 22 races to Rosberg’s 10. In wheel-to-wheel combat over three seasons Hamilton has categorically dominated.

As in 2014 Hamilton deserves the title and now, as a triple champion, has submitted his application papers to join the pantheon of all-time greats.

For Rosberg, he will rue the errors he made through the season and still lacks the pure racing instincts that makes Hamilton as good as he is.

The bemused smiles pasted on Toto Wolff and Niki Lauda’s faces when Rosberg threw away the lead said it all.

The fickle nature of legacy
Hamilton is already the bookmakers’ favourite to win the 2016 Championship. He is only one title behind Vettel but unlike the German, who won four straight titles, had to wait five seasons between his first and second.

Vettel, who believes that “Ferrari is getting closer” to Mercedes and who will be targeting a title tilt in 2016, is often criticised by some fans for “only winning because Red Bull had the best car from 2010 to 2013”.

It is striking that his reputation has grown in 2015 because he moved to Ferrari and has been competitive, a similar move to the one made by Hamilton to Brackley in 2013.

A fifth title for Vettel next season would underscore his credentials in the aforementioned patheon, while counter-intuitively a fourth for Hamilton, especially if Mercedes retains its speed and dominance, might raise questions about his.

Then there is Fernando Alonso. The double champ last won the title in 2006, and his request to retire the McLaren-Honda in Austin despite running in the points was unbecoming of the champion that growls inside the former Ferrari driver.

Of course Alonso’s tenacity at Ferrari is the stuff of legend. But the bullish Spaniard who took it to Ferrari in their pomp and won two titles by the age of 25 seems a distant memory.

Red Bull go retro as fans look to the future
Both Daniil Kvyat and Daniel Ricciardo mixed it with the all-conquering Silver Arrows at Austin, prompting the latter to comment that “we were quite quick for a few laps and it felt like old times”.

Ricciardo’s tangle with Force India’s Nico Hulkenberg late in the race compromised a potential points finish, while Kvyat’s early-race promise disintegrated as he ran wide on numerous occasions before he lost the rear and spun into the barriers and retirement.

Despite failing to capitalise on their speed in the slippery conditions, the race highlights just how good a chassis is under Ricciardo and Kvyat – and provides an insight into past and potential glories at Red Bull.

Yet Renault’s shortcomings are well documented, as are Red Bull’s complaints about them.

The public fall-out between the two has left Red Bull without a power unit for 2016, and the sooner Red Bull find a solution the better. F1 will be poorer without the likes of Ricciardo and Kvyat, and let’s not forget a certain teenager, also on Red Bull’s books, who showed superb maturity, tyre management and racecraft to finish fourth.

Always bigger and better
The 2015 US Grand Prix was a wonderful advertisement for the virtues of the formula; it had a bit of everything: overtaking, safety cars, shunts, and the title was decided.

The only blip, it could be said, was that Manor-Marussia’s American driver Alexander Rossi missing out on a points finish. Still, 12th is a fine return both for driver and team.

And although there might not be a US driver on track in 2016, Haas’s entry will provide a much-needed Team America element when F1 returns to Texas.