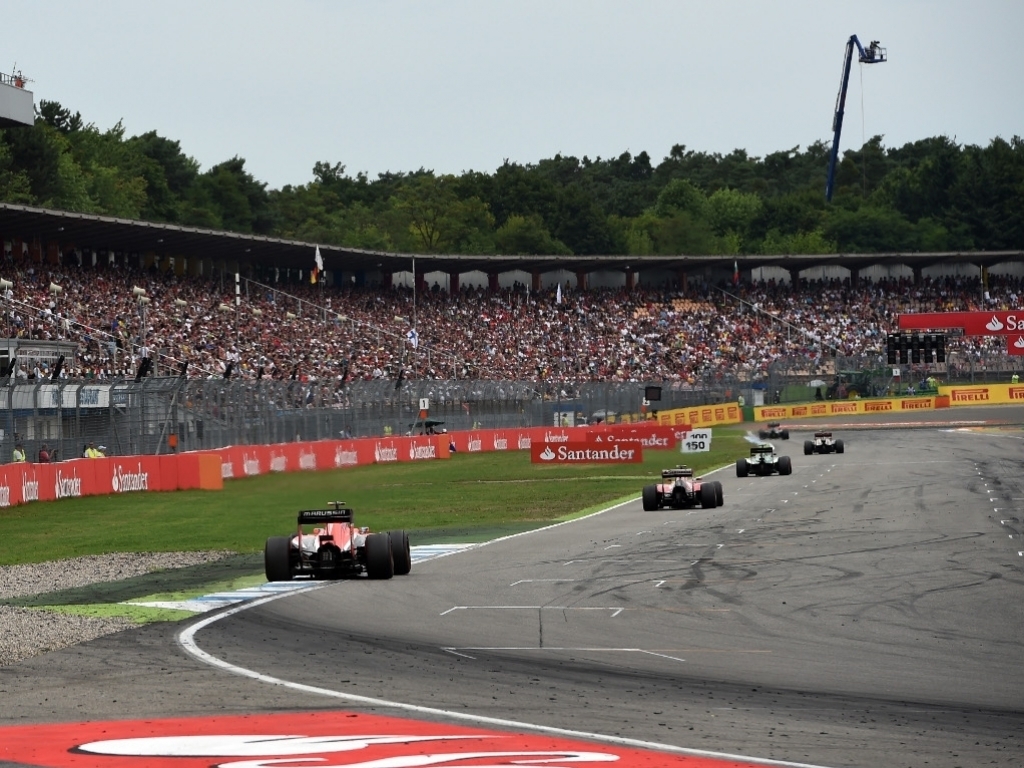 For all you need to know about the big news, the track, the tyres, the stats and standings ahead of the German GP…

Guess Who’s Back? Back Again?
After finances and failed negotiations scuppered last year’s German GP, the country returns to the Formula 1 calendar this season with the race back at Hockenheim.

It is the most represented country on the Formula 1 grid with  Nico Rosberg, Sebastian Vettel, Nico Hulkenberg and Pascal Wehrlein all calling Germany home.

It is also the second most successful country when it comes to Drivers’ Champions, having won 11 titles – even if it was just two drivers winning them all – to Britain’s 16.

But whether any of the four Germans can win their home grand prix this season remains to be seen as they are coming up against Lewis Hamilton.

The Brit is in incredible form, having won five of the last six grands prix, and he heads to Hockenheim determined to retain the lead in the Drivers’ standings, the lead he only just grabbed last Sunday with a victory in Hungary.

But Rosberg, although he insists he is not counting the points, will know that a victory on Sunday will put him back up into P1.

Red Bull and Ferrari will both be looking to get involved but, let’s be honest, based on recent form a Mercedes 1-2 is the most likely result this Sunday.

A Lap Of The Hockenheimring With Romain Grosjean
“After the start-finish line, the first corner is the most exciting one. It’s a very high-speed, right-hand side corner. Normally you brake just a little bit, just one gear downshift, and then you’re on a straight line.

“Turn two with tricky braking and certainly very tricky throttle application. You’re turning from right to left to go on the main straight. You really want to go on the power as early as you can to get a good straight line. Big braking for the hairpin next.

“Coming back to the Mercedes corner, a right-hand side corner flat out, then braking to the 110 degree left-hand side corner. Again, there’s a challenging throttle application there as you’re turning right straight after, just about flat.

“Then entering the stadium, there’s a bit of braking to the right-hand side, very high-speed corner. The Sachskurve is a very high-banked corner, left hairpin. It’s quite open, though, with a few lines through it.

“Then you go to the last couple of corners – they’re quite famous. You try to carry as much speed as you can to the first one, and go as flat as you can for the second one to get a good lap time.”

The Important Times
The formation lap for the 67-lap German Grand Prix will take place at 2pm local time on Sunday, 31 July.

Saying No To The Mediums
As Formula 1 returns to the Hockenheimring, only Force India have welcomed Pirelli’s choice of the medium tyres, taking three sets of those whereas all the rest have opted for just one set.

That has limited the team’s number of supersofts to six while they have four of the softs.

At the sharp end of the grid, Mercedes have eight supersofts and four softs, Ferrari have nine and three and Red Bull have matched Mercedes’ choice.

The Numbers That Matter
Last time out in Hungary, Formula 1’s championship table swung in Lewis Hamilton’s favour for the first time this season.

His fifth victory at the Hungaroring, and his fifth of this season, saw him take a six-point advantage over Nico Rosberg.

The German has dropped to second, but is a whopping 71 points ahead of third place Daniel Ricciardo.

He’s in a four-way fight for best of the rest with Kimi Raikkonen, Sebastian Vettel and Max Verstappen. The quartet are separated by just 15 points.

Betting
The German Grand Prix takes place this weekend, so make sure you check out our editors’ latest collaboration with Betsafe, which includes tips for bets.