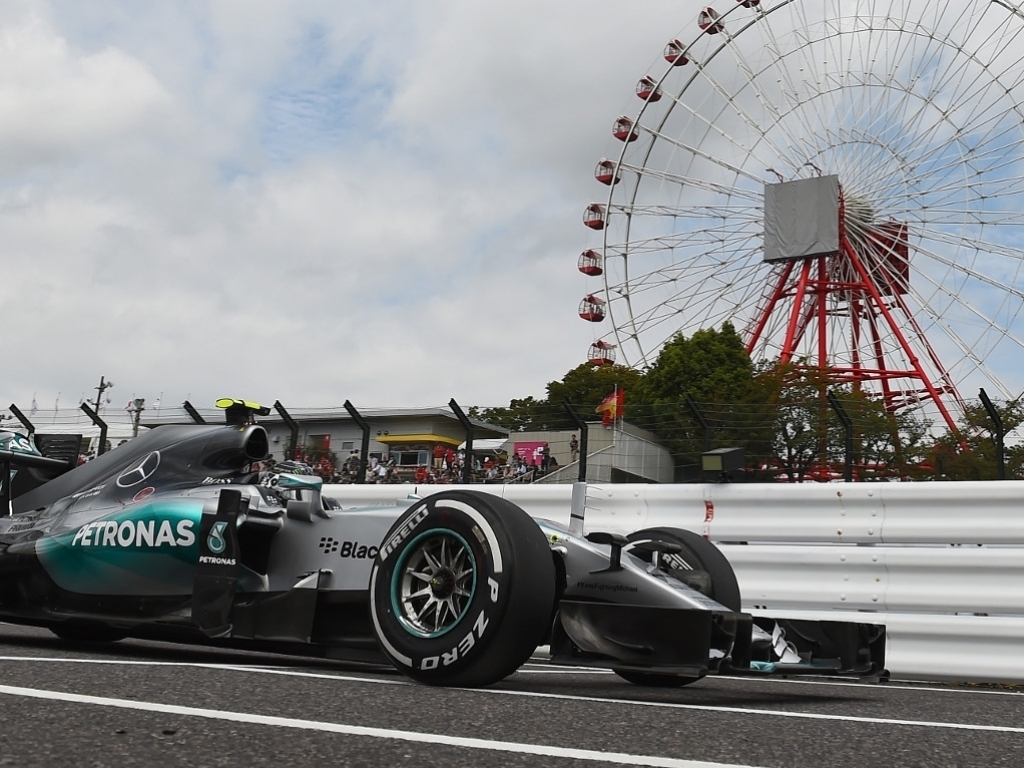 For all you need to know about the big news, the track, the tyres, the facts and figures ahead of the Japanese GP.

A tale of two very different fortunes
Even when it goes wrong for Nico Rosberg it seems to go right. And the exact opposite can be said for Lewis Hamilton.

Pitched into a spin at the opening corner of the Malaysian Grand Prix, Rosberg could only watch as his chances of winning the race were ended by Sebastian Vettel.

In sharp contrast, Hamilton romped from pole position to a 20-second lead over the chasing Red Bulls and looked on course for victory. Then his engine failed.

Hamilton recorded a DNF, which elevated Rosberg to third and allowed the German to march 23 points clear in the title race

Without a doubt Hamilton has had the worst of Mercedes’ bad luck but, with 125 points still in play, he is adamant it is not yet over.

This weekend the British World Champion is chasing his fourth Japanese GP victory, his third in succession at Suzuka, and is the firm favourite to go P1.

However, with Lady Luck smiling down on Rosberg, the German won’t be too worried as even a 1-2 finish, which Mercedes recorded in 2014 and again in 2015, will assure he leaves Suzuka as the championship leader.

Daniel Ricciardo’s Sepang win has seen him pull clear of the chasing pack in the race for ‘best of the rest’ behind the Mercedes team-mates.

Formula 1’s two German World Champions are the leading drivers at the Japanese GP with six wins for Michael Schumacher and four for Sebastian Vettel.
Both drivers went on to win that year’s World title except for one occasion, 1997 for Schumacher and 2009 for Vettel.

Vettel also holds the record for the biggest winning margin at Suzuka as he beat Felipe Massa by 20.639s in 2012.

But it is his Ferrari team-mate, Kimi Raikkonen, who holds the record for the biggest recovery to P1 at the Japanese GP. In 2005 he came from 17th on the grid to beat Giancarlo Fisichella by 1.6s.

That remains Raikkonen’s only Suzuka win.

From Paddock Club pit lane walks to the drivers’ track parade, we have all the times that you need to note for the Suzuka weekend

And don’t forget it is a 2pm start local time, 5am GMT, to the Japanese Grand Prix.

A lap of Suzuka with Felipe Massa

“I think Suzuka is one of the best places to race. I love the layout and the high-speed sections. Sector 1 I think is the most incredible sector in the world. I really love Japan. I love the people and I love to go there to spend some time in Tokyo. I’m really looking forward to my last Formula One race in Japan and I can’t wait to enjoy it with the amazing Japanese fans.”

Ferrari go aggressive
Ferrari are taken the most aggressive tyre choices on the grid for the Japanese GP.

Having a choice between hard, medium and soft compounds, both Sebastian Vettel and Kimi Raikkonen have opted for nine sets of soft compounds each

Compared to Red Bull, Ferrari have will take six extra sets of softs, and two more sets than Mercedes

Over at the Silver Arrow garage, Nico Rosberg and Lewis Hamilton have once again differed in strategy, with the German selecting an extra pair of mediums and one less hards compared to his team-mate

Interestingly, Vettel is the only driver on the grid who is taking just one set of the white-striped tyres.

Betting
It’s the Japanese Grand Prix this weekend, so here is a link to our regular betting preview for Betsafe