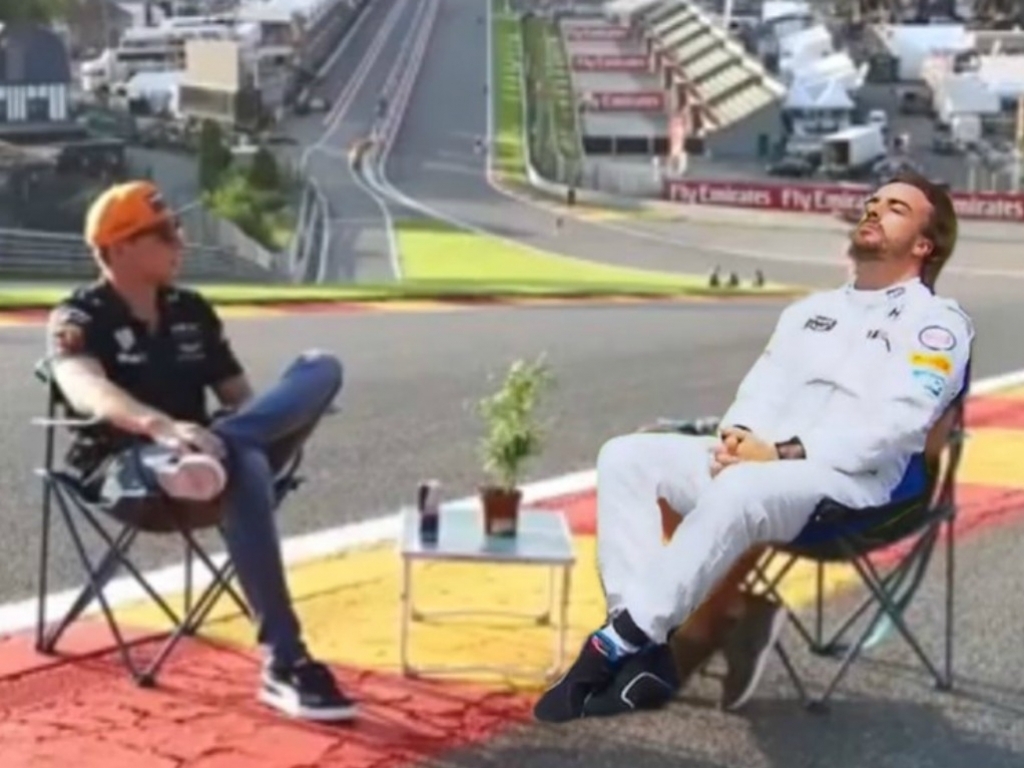 Max Verstappen and Fernando Alonso retired, Sergio Perez and Esteban Ocon collided and Sebastian Vettel getting close to Lewis Hamilton but not quite close enough. It’s like F1 has never been away.

Cloudy with a chance of balls

Arguably the highlight of the Hungarian Grand Prix before the summer break was Kevin Magnussen’s epic confrontation with Nico Hulkenberg in the paddock, with the Haas driver telling the Renault man to “suck my balls”.

Even though a few weeks have passed since then, fans are not ready to forget about it just yet… 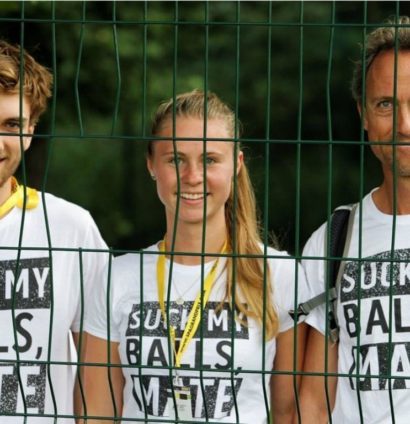 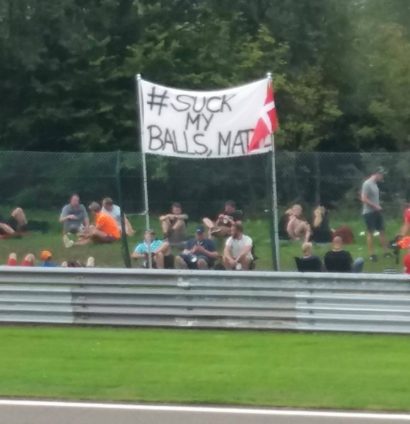 That wasn’t the only bit of creativity we saw from the crowd at Spa. When you forget to take an umbrella or a decent coat, anything will do. 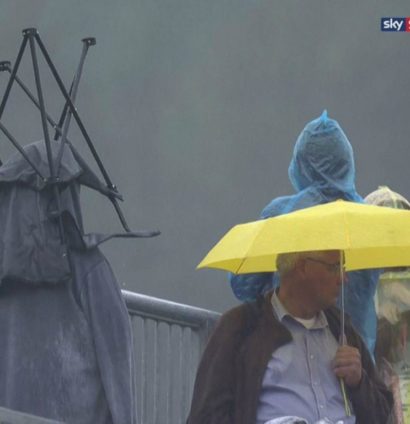 Some fans have to take it too far, though. We give 10/10 for effort, but we still haven’t managed to sleep properly since seeing these images. 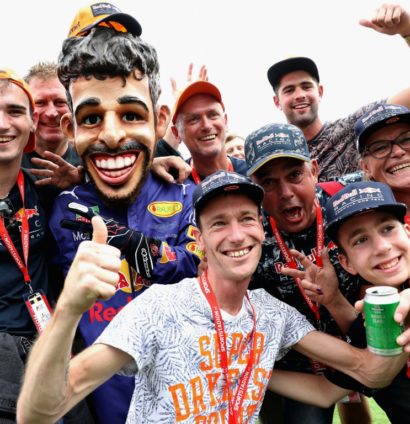 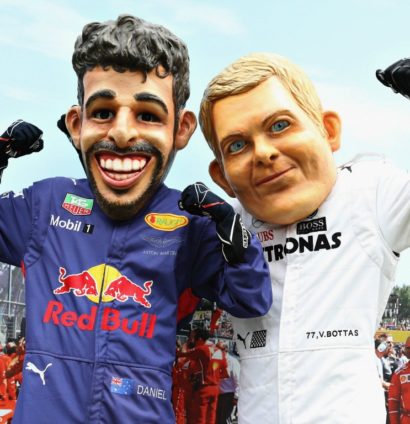 At least we know Diego Costa is enjoying his time away from Chelsea.

Poor Daniil Kvyat. As he tries to quietly settle down again after a string of collisions and penalty points, the new F1 2017 game was on hand to provide the subtlest of digs to remind everyone just what he is capable of.

Whoever at @Codemasters chose Daniil Kvyat for the "Races aren't won at the first corner, but they can be lost" tutorial, bravo ?????? #F1 pic.twitter.com/5x8L89ERlW

Before we go all doom and gloom on McLaren-Honda, it warmed our hearts to see Daniel Ricciardo and Max Verstappen as best mates again. They are such good value together.

That video gave us this wonderful gift….

And this to use forever more…

Ricciardo to Verstappen: "Can you speak Italian?"
Verstappen: "No"
Ricciardo: Fu*k off" ? pic.twitter.com/e1nBoKgLLd

And for all of Verstappen’s reliability problems, he cannot say that he was not warned by the Red Bull team. Talk about tempting fate. 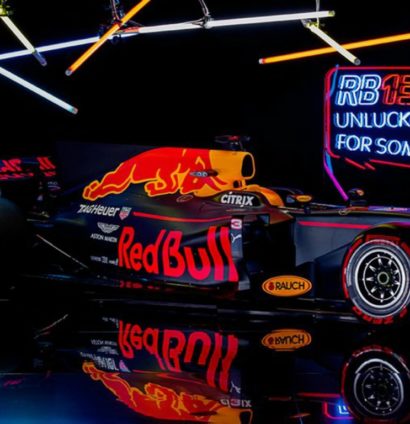 It’s official: Honda are now a complete parody of themselves.

As Fernando Alonso desperately tried to drag the MCL32 into the top-ten shoot-out, he was inevitably prevented from doing so by a complete lack of power.

The reason this time? The Honda system got confused with Alonso taking Pouhon flat out. You honestly could not make this sh*t up.

Standards have dropped to at McLaren, too, it seems, but at least they are embracing it…

Fernando returns to the box. Chewie, our rear jack man is ready as ever. ? #BelgianGP pic.twitter.com/ljwB3y41BL

But Alonso’s qualifying woes carried over into Sunday and you do get the slight impression that he really, really, really does not care about Honda. Here’s a selection of his equally hilarious and depressing radio messages.

Alonso: “Embarrassing, really embarrassing.”
“Yep Fernando we see that. Be careful, we have two warnings for turn four.”

“Magnussen is 1.2s behind Grosjean.”
Alonso: “I really don’t care about all the gaps too much. This is just a test.”

“Fernando suggest shape four to protect the rears.”
Alonso: “No more radio for the rest of the race.”

“Fernando, Stoffel is pitting this lap.”
Alonso: “Why? The only [censored by FOM] car that I will overtake.”
“Fernando we didn’t want to be pushed back into Hulkenberg and Stroll. Sorry Palmer and Stoll.”
Alonso: “They will pass me in the next lap. I have no protection now. But anyway it doesn’t change my life.”

While Alonso insisted he did not retire the car because it wasn’t going to get in the points. It’s hard to believe him… 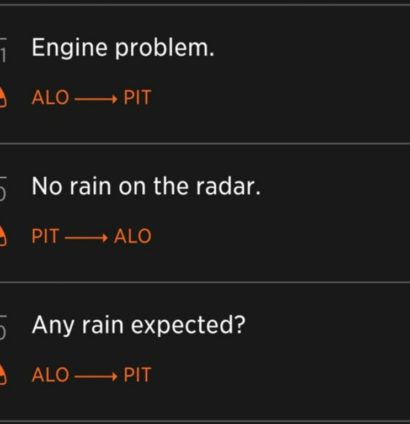 But at least there are so many McLaren fans sticking by the team through thin and thinner. Great to see at Spa. 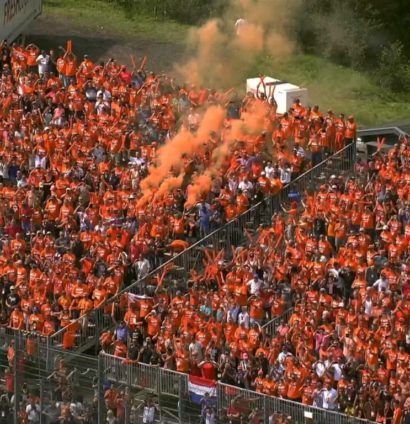 Well, it’s more a last thought, really, as Carlos Sainz completing spaced out following the Belgian Grand Prix. A tough year is really catching up with him.